June 10th and Waterford are out of the All-Ireland championship. Same day and many people’s favourites Tipperary are also gone. It is a long summer ahead with no hurling for these two counties. In Limerick yesterday, Waterford looked tired. Their snappy hurling that had Tipperary on the ropes the previous Sunday was missing. Passes went astray, shots wide and Limerick seemed to harry them with ease as they moved into a commanding lead early in the game. It was a lead they never looked likely to lose. Their play, in contrast, was sharp. They took their scoring chances well. When opportunities for goals came early in the first half, Gearoid Hegarty and Graeme Mulcahy took them. By half-time they were 2-14 to 0-7 up. It was too much to ask of Waterford to mount a comeback in the second half, and Limerick ran out comfrotable winners racking up 2-26 to Waterford’s 1-16. Limerick were impressive, powerful and precise. In the other game, Clare sprang a surprise and a late comeback to put Tipp to the sword. The game turned when Jake Morris’ attempt on goal hit the post. The ball broke and Clare were swiftly up the field and a Podge Collin’s pass set Ian Galvin on his way to score a fine goal. Had Morris’ shot gone an inch to the right, Clare would have been 7 points down. Instead, their goal brought them to within a point of Tipp. Tipp replied with a point, but Clare drove on in the final minutes to grab the game from Tipp and end their summer on June 10th.

Outside Limerick station I met Liam and Pat Phelan. Liam was sporting a blue and white mohican, which his son told him he had on sideways and carrying an oak tree sapling in his hand. “What’s going on with that? I asked. “Oh, that’s to bring good luck. Mighty oaks from little acorns grow.” Well, ye could have done with that luck last week, I said.

The Ennis Road is a long, wide and straight road leading up to the Gaelic Grounds stadium. In contrast to last week there large groups of fans making their way to the match. Few people seem to be leisurely in their approach and asking people to stop for photographs and a chat about hurling can be challenging, particularly as when a group stops it invariably causes a hindrance to those following. The Murphy family, with Elle Fox, were obliging and stopped for a quick group photo. So, a big Up Waterford so, I said to the kids. No! They shouted back. OK. How about an Up Cork. A bigger and louder No! came back.

Jimmy Finn and his friend Bowie were sitting on a wall outside the pub on Ennis Road having a drink before the game. I got chatting to them. “I’m chasing Liam McCarthy all my life. I go to all the games. I thought last year was the one, but no. But we will keep on going, said Jimmy. It’s a lifetime dream.

“We’re big Johnny Logan fans“, said John Crotty. “What do you mean? I asked. “Well,  If we don’t do this year, we’ll do it next year. So what’s another year.”

Four children born in Cork, but only Bill supports the rebels. His brother James and two sisters all support Waterford. “He brainwashed us. We were given no choice.” said James. We were born in Cork, but we have to support Waterford.“ Cork are too cocky, said Noel, the father. So, next week against Cork you will be on your own, I said to Bill. Ya, all on my own.  Don’t worry, I said, I’ll be with ya, Bill!

Great thing about the GAA is how freely the fans mix at the games. I had met Paddy Phelan’s family at the Tipp Waterford match the previous week. Here he was talking hurling with Limerick fan John McGrath. Pat Phelan  was at the All-Ireland hurling final in 1959 when Waterford best Kilkenny. “It’s been a lifetime since.” he said. 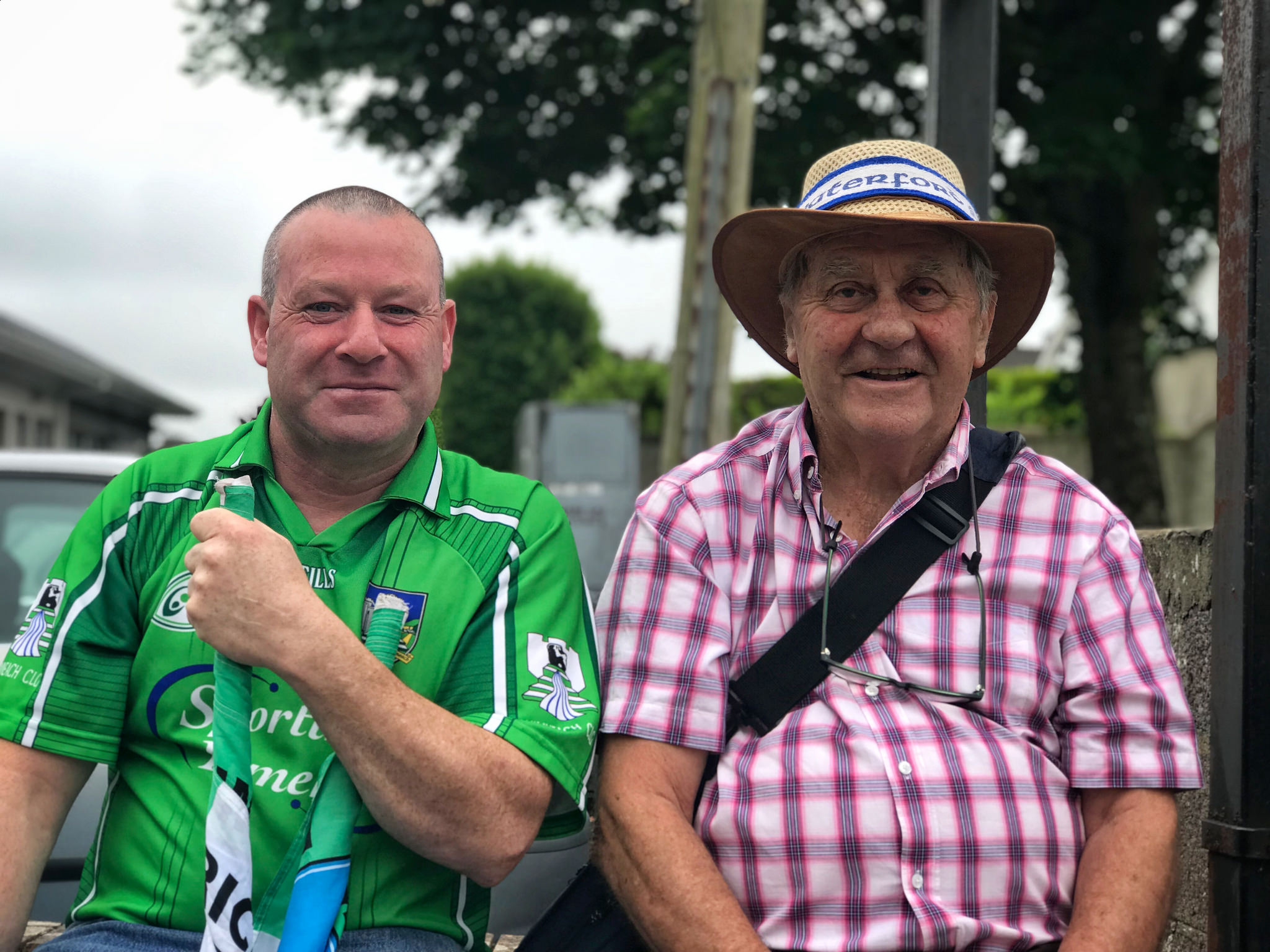 On my way into the stadium on Sunday I saw the Phelan sisters all dressed up in Waterford colours. Deirdre, Rhona and Helen. Rhona is the only one still living in Waterford. “We’re the three sisters for the 3 ships on the Waterford crest.”, Deirdre told me. The three sisters have been going to the games together for years. Their earliest memory was when Rhona was at a Waterford Cork match and was knocked off her seat when Cork scored a goal.

It was a pleasure to spend a few minutes talking with Michael Shanahan. Michael’s father was a Tipperary man and his mother a Limerick woman.“What was the house like when either Tipp or Limerick lost to each other when you were growing up? I asked. “It could be a bit sour for a few days. ”On July 7, Michael is getting married to a Tipperary woman. “This is the 94 and 96 jersey.” My wife-to-be has her Tipp jersey from the same time.”  “I’m lucky Limerick beat Tipp before the wedding.”

Cyril and Justine Kelly, a Canadian, bringing their 10-week baby boy, Beau, to his first Munster Hurling Championship match. “It’s important for him to know about his Irish heritage. His culture. His traditions.”“But he won’t remember it”, I said. “We will tell him of it.”

And so this wonderful summer of hurling continues. Next weekend I am up in Ennis to see Clare take on Limerick. There are lots of permutations as to who can qualify for the July 1st Munster Final. Cork, Clare and Limerick all know a win will put them there. Cannot see any side settle for anything else.