Brendan Ó Sé is an multi-award winning fine art photographer/mobile photographer from Cork, Ireland, and Mojofest Photographer of the Year (2018). Brendan offers regular mobile photography workshops in association with Cork’s Glucksman Gallery and The Gallery of Photography in Dublin. He also delivers bespoke worskhops for corporate clients and has worked with Bord Gais Energy, Ireland, Sustainable Energy Authority of Ireland, the Health Service Executive of Ireland,  and the National Museum of Ireland.  He has been invited to provide guest lectures and workshops for Dublin City University Business School. From time to time, he gives workshops overseas, travelling to such places as Iceland, Scotland, London, Porto, Cyprus, Lithuania, Bangkok, Jakarta, Singapore, Penang, Hong Kong, and Bali. As the world is adapting to life in this global pandemic, Brendan, in conjunction with, The Gallery of Photography, put on two online workshops in aid of the Irish Society of Prevention of Cruelty to Children. The workshops raised €5288. 100% of this went to the charity. More online workshops are planned for summer of 2020.

Starting in May, 2018, Brendan’s To the heart of hurling project was a photographic journey discovering what hurling means to us. He set out to document the year’s championship in photos; exploring the relationships among fans that form around our unique game.  Over 15 weekends, Brendan travelled to see all the counties play and photograph the fans and document their stories, learning what makes their relationship with each other, with their county and with the game of hurling. Capturing images that show how these relationships are what makes the GAA so special, so unique and so Irish. The work was on exhibition for the month of September, 2018 in the Hunt Museum, Limerick. You can see a photo essay of it here on RTE and also here.

There is a blog report of each match Brendan attended here, and you can follow him here on Instagram.

His DSLR and iPhone photography has been exhibited in Cork, Galway, Dublin, Miami, Idaho, Florence, Brussels, Lecce, Victoria, Ontario, Rome, Porto, Bangkok, Singapore, Penang and Jakarta. Brendan was part of the original Apple World Gallery of images shot on iPhone 6 in 2015. His photograph was showcased on billboards and posters in cities such as Los Angeles, San Francisco, New York, Paris, Bangalore, Seoul, Tokyo, Bogota, Kuala Lumpur, Berlin, Boston, Milan, Singapore, Sydney and many more throughout the world. It was also featured in many print magazines, including The New Yorker. In June 2015, Brendan’s photograph in this campaign was awarded a Cannes Golden Lion in the advertising world’s Oscars and also won Gold in the Clio Awards 2015.

Using either the iPhone, Fuji XT-2 or a Nikon D7000, he tries to see and create in unusual ways and this results in some unique imagery and striking street photography.

For licensing of images enquiries and commission work, please use the contact page. 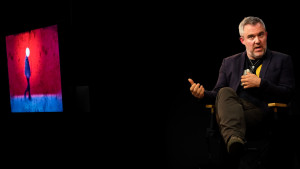 All photographs in the galleries are available as fine art prints, printed professionally using the best paper and ink. Price includes post and packaging. For different print sizes, please contact me.

2018: MojoFest Photographer of the Year.

2017: First Place – Photographer of the Year in the 10th iPhone Photography Awards

2016: 1st place in the Street Photography category in the Mobile Photography Awards, 2015 and 5 Honourable Mentions across four other categories.

2015: Best in Show at the Florence International Photography awards.

2 photographs in the top 50 in Tiger Camera Competition 2015.

April, 2015, I was invited to be interviewed by the well-known photographer, Dan Rubin as part of the Apple Meet the iPhone Photographer series. You can watch the interview here.

March, 2015, I was invited to speak at the world’s first mobile journalism conference MojoCon in Dublin, 2015. You can see my talk here.

March, 2014: To learn more about my iPhone photography you can watch this short film Glen Mulcahy (Innovation Lead, Technology with RTÉ-Ireland’s National Public Service Broadcaster) made about me here.

January, 2020: The best iPhone photos ever taken on Techsmash.in

May 2019: Feature on Moment’s blog on my portrait work.

May 2019: 9 Photographers Proving the iPhone is a Great Camera

August, 2018: Feature on my #heartofhurling photo project in Irish News, here and here.

August, 2018: Two features on my #heartofhurling photo project, here and here on RTÉ.

May, 2018: The Photographer Academy

November, 2017: Out of the Phone – Mobile Street Photography Book

July, 2017: Brought to Light series on The App Whisperer site.

December, 2015: My takeway point about Mobile Photography for 2015 – Mobiography.

November 2015: Feature in Cult of Mac, Peta Pixel and F-Stoppers about receiving the Apple Shot on iPhone 6 books.

September, 2015: Feature on my night photography shot on iPhone with Enlight blog.

August, 2015: Feature and interview with Pichit.

July, 2015: Interview and feature in The Irish Sun.

May, 2015: Feature in Street Photography magazine – Edge of Humanity – of my Korean photographs.

May, 2015:  The popular camera bag and accessories company, Pompidoo did a feature on my photography here.

April, 2015: A feature of my Tokyo photography in the German photography magazine Kwerfeldein.

April, 2015: German magazine On! featured 5 of my images with background description. Check it out here.

April 2015: An interview with Knomo London about my iPhone Photography.

March, 2015: It was a great honour to be asked to help convene the panel of speakers for the mobile photography for the world’s first mobile journalism conference in Dublin, March 2015, organised by Glen Mulcahy and RTE. You can read about my experience of speaking at this here.

March, 2015: Here is an interview with iPhone Photography School I did.

December, 2014: Read about the image I am most proud of in 2014 on the mobiography website.

November, 2014, the Cork Camera Club invited me as guest speaker. I also judged their Street Photography competition in January 2015.

The online magazine Mobiography did a feature on my iPhone work with a video also.

French art magazine Plateform did a feature on my iPhone series of photographs taken in the corridors of my workplace. You can see it on p. 112 of this publication.

Travels with my Camera in Asia on the wearejuxt website in May 2014.

iPhoneography Central featured my iPhone photography with this video on their site.

Feature of a series of photographs and writing on London in Chicago Center for Literature and Photography.

‘The (iPhone) photo I am most proud of‘ on the excellent mobiography website.

Feature on my photography in Chicago Center for Literature and Photography.

‘More than a snapshot‘ – a feature of a series of iPhone images taken in Asia in spring 2012. (mobiography)

‘A day in the life‘ – interview on the appwhisperer site.

An interview and feature on one of my favourite street photographer’s website – Stephen Cosh.

Some travel and people photographs on the www.dphoto.com site.