Everything about Kilkenny tells you you are in a hurling town. Shop windows are given over to full displays of Kilkenny hurling paraphernalia. The famous black and amber jersey of the cats is seen everywhere. There are even houses painted in the team’s colours. There is an air of excitement before the big championship clash with neighbours Wexford; a confidence that only Kilkenny fans can have. Sure, their team is not the great team of 2006 to 2015, but this is Kilkenny. They know how to win hurling matches. Again they won. Again they won when the odds seemed stacked against them. Wexford were at one stage nine points to the good. Kilkenny looked like they were going to suffer consecutive championship losses to their great rivals. Aided by the home support in Nowlan Park they rallied and hit Wexford for 15 points in the second half to win by a single point. Wexford had led going in at half-time by 6 but the toll of 4 games in 21 days took its toll as they tired in the second half. Davy Fitz pointed to this and claimed his Wexford team did not deserve to lose. Maybe so, but you cannot discredit Kilkenny. They know how to navigate tight games. They know they have it in them to stay the course of the battle and more often than not they come out on top.

Kilkenny move on to meet Galway in Croke Park in the Leinster decider on July 1st. Wexford will meet the runners up in the Joe McDonagh cup a week later. 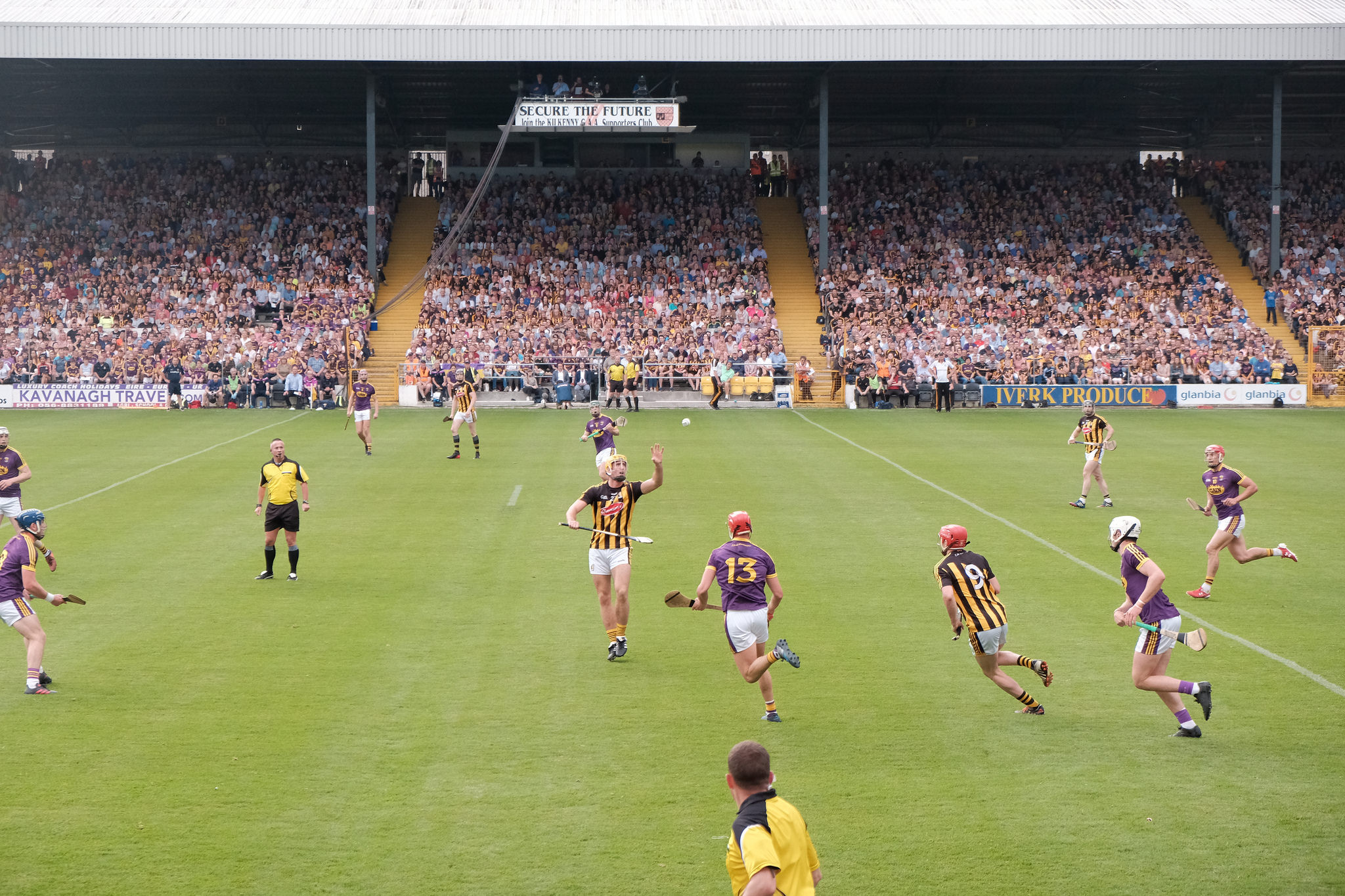 Wexford were the last team for me to see in this championship. I met  two Wexford fans, Nickey Cash and Mick Roche, two men married to two sisters, sitting in a playground having a bit of a picnic before they headed into the game. The two have been going to games together for years. Usually they are part of a larger group but the rest of family were at a wedding, but they couldn’t miss the clash with Kilkenny. Nickey told me a great story. In 1957, just a 1 year-old little baby, his parents brought him to Croke Park to see Wexford take on Tipperary. “Who won?” I asked. Tipp did. But my parents, God rest them, told me not all Tipp fans were happy. No, there was one man who left Croke Park covered in my vomit. Apparently, I threw up all over him.

Being on the road with this project means that I am getting to see some familiar faces. I first bumped into Patsy Murtagh on the pitch at Parnell Park when Kilkenny stole it at the death from Dublin back in May. Patsy was beaming that day. It was lovely to show him the photo I got of him on that occasion and to get chatting with him. Kilkenny people are passionate about hurling and I always find them to be very fair and I don’t think I’ve ever come across one who, despite all their success, gloats. Patsy had ‘Henry is still King’ on the back of his Kilkenny jersey. “I’ve been going to matches since the 50s, he said. I have seen them all – Ring, Doyle, Kehir, DJ, Sheflin. Who was the best? I asked. You cannot compare eras, he said. It’s impossible to imagine the players from years back playing now with all the advances and advantages thru have. And you cannot imagine the players of today playing in the conditions of the past. I loved Patsy’s honesty and enthusiasm for a game he has been following his whole life.

A little up the road from Patsy I came across a Kilkenny fan who was just setting out on his journey following the cats. Patrick Jr. Noonan with his father Patrick Snr. “He sleeps with his hurl, Patrick told me. “Dreaming of playing for the black and amber, I said.

What’s following your county about lads? What does Wexford mean to? Going to the games together; what is special about it for ye? Mark Wallace, Kevin Doyle and Darren Murphy were the strong silent types; none offering an answer. Eventually Kevin said: it’s an excuse for pints. And all that goes with that, I suppose, I said. Ya, ya, all that, Kevin said.

Tony Tierney was standing opposite me on the Main Street in Kilkenny, proudly sporting his Kilkenny jersey. When I approached him and told him about my project he started to list off the years Kilkenny has won All-Irelands under Cody. He told me he had not missed a Kilkenny final since 1963. We lost a lot too, he said. Not enough to Cork, though, I said. Tony winked and. smiled at me. What’s hurling? I asked him. A game of men in action, he said.

The first game we went to was the 1996 All-Ireland final (Wexford beat Limerick), that was not a bad one to start with. Who brought ye? I asked. Our father did.

“Jimmy played inter-county hurling for Wexford from 1978 to 1992, his wife Kathleen told me. When he was playing; did you ever worry about him getting injured? I asked. No, Jimmy was tough, she said. Hurling is what we do. It’s our way of life.” Jimmy added.

In 1982, I went to my third All-Ireland final to watch strong favourites Cork take on an unfancied Kilkenny side. I remember the game turning in the space of about two minutes when Kilkenny’s full forward Christy Heffernan scored two might goals for Kilkenny. I was heartbroken that day. Walking a long the main street in Kilkenny I saw this tall, slim, red-headed young fella come towards me with his friend. Eoin Heffernan. Yes, a nephew of former Kilkenny great – Christy – and his friend Michael Boyle. Two great guys. I could have stayed chatting hurling with them for hours. Who do you like to beat most? I asked. Tipp! They both said.

We’ve made a deal to follow Fermanagh in football for Emma. But you said she’s a Wicklow woman, I said. Ya, but my father’s from Fermanagh. So, I follow them in football.

At half-time in the game Sky Sports laid on the entertainment when the three guys from A League of Their Own, Freddie Flintoff, Jamie Rednapp and Rob Beckett took penalties on Wexford’s Damien Fitzhenry. The three guys were trained by DJ Carey, but to be honest DJ could have done a better job.

It was past 11 before I got home on Saturday night. I was up early the following morning to head to Limerick for their clash with Waterford. Read about that in my next blog post.