Exactly a year ago, I posted a photograph I had taken a few weeks previously in Copenhagen. Truth be known it was a photograph I was not sure of. I had been trying to get the contrasts right in the image and just wasn’t happy with it. In fact, I was unsure whether I would post it at all. In the end I did share it on Flickr, but held off posting it on Instagram until it first had gone live as part of Apple’s shot on iPhone 6 campaign on huge billboards all over the world. It is such a funny thing how we can see our own photographs. The slightest flaw can deter us from sharing. Thankfully for me I got over that flaw and did share it on Flickr. A year on now, and I realise that had I not posted it, had I allowed my over-critical eye to rule, the most magical experience of my life would never have happened.

Copenhagen is such a cool city. I was there on a university exchange visiting the University of Copenhagen for a week. It was the first time I had ever used AirBnb and it was a really good experience. Peter, my host, met me on my arrival. He had everything ready for me and had gone as far as lending me his bicycle for the week and mapping out my route to the university. He also left me four bottles of local beer in the fridge. I knew it was going to be great week!

I arrived in Copenhagen on a Saturday. The day previous I had bought the new iPhone 6 on its release day in Ireland. The 6 was bigger than the iPhone 5 I’d had. I was unsure of how to grip it and very anxious that without a case I would let it slip out of my hand. Undeterred, I set about shooting in Copenhagen with it and very soon discovered the easiest way to shoot with it was to use the volume buttons as the shutter.

As the week went on, I was getting more and more used to it and had managed to get one or two good shots with the new iPhone. Prior to coming to Copenhagen, I had contacted a Flickr friend of mine, Thomas Toft, whose work I am a big fan of. We arranged to meet late Wednesday afternoon in the city centre and the plan was to cycle out to this park with those crazy curved white lines that I had seen in so many of Thomas’ photos.

It was an early autumn day in Copenhagen. The sky was clouded over, but it was not too cold. After about a 15-minute cycle we arrived at the park. Like many places you have seen in photos, when you get to see them and the chance to shoot it for your appears, at first you feel a little lost and apprehensive as to how you can interpret and present the scene. I knew I wanted to get the sense of movement of the lines, but I was unsure whether it would work best blurred or in focus. As it turned out, it had to be in focus.

It was great being with a fellow photographer. If I am asked to give advice to aspiring photographers, one tip I would always give is to spend time with other shooters. You need it. I find I discover a lot about my own photography as I am chatting with others. Being there in Superkilen Park in Copenhagen on the greyish autumn day with Thomas is a memory I will never forget. Our conversation rarely strayed from photography and we bounced ideas off each other on how we would shoot this place. After a while, we changed location to get a different perspective from the top of the hill. It was here that I knew I would be able to compose the shot I wanted. From this vantage point the lines flowed down and away from me. The sense of movement I wanted was there. Now all I had to get was a human element and as we chatted and waited people began to pass through the park. I took about 5 shots in total from this position. Later, back in the apartment, reviewing my images I saw that I had one or two that were OK. I really liked this one, and the other, the one that would go on to be seen all over the world – well, that was OK. 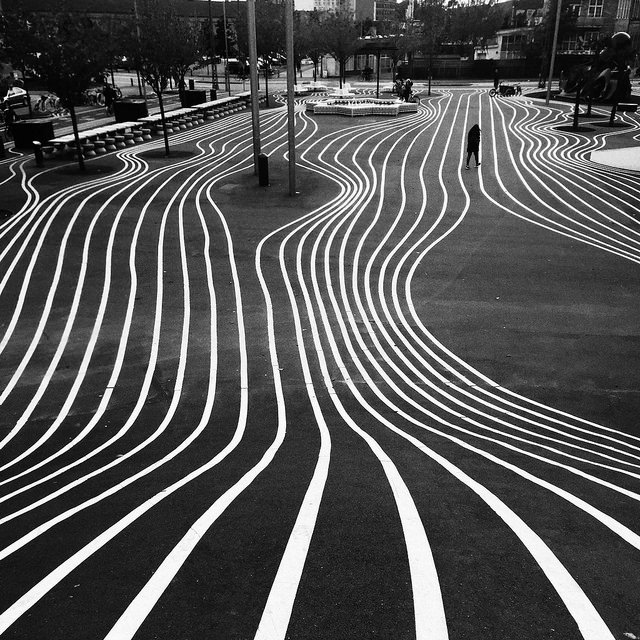 October 31st, 2015, I posted it on Flickr and wrote this blog piece about the two images I was posting on that day. You can see that I wrote virtually nothing about the image. For me, it was, at that stage, just another iPhone photograph. But the really curious thing is the title I gave it. Now, I am not a religious man. I have a God-shaped socket, but no plug fits it. But yet, I gave this photograph the title: God will send a sign. When he does, be prepared.

So many times this year I have reflected and tried to work out what that sign might be and why I gave the shot that title. For me, titles either come or they don’t. If they do, it is swift. This was swift. Looking at the image, I recall feeling that the four people were all independent actors, unaware of and disconnected from each other, but at some moment something could happen that would cause them to be together, or to need each other and when it happened, they would need to be ready.

Of course, as things turned out, with Apple licensing the image and it going viral around the world and all the attention it brought me, I began to think of a personal meaning for this title. And you know what, I do not have a fully-formed idea about this, except to say that I believe it means that I need to push this as far it can go and to make the most of the talent I have been given.

Since the Shot on iPhone 6 campaign went live in March such brilliant, unimagined things have happened. Along the way, I have had many accolades and successes, visited new and exciting places, gained exposure and had the chance to showcase my work in so many different formats and areas, but the thing that struck me from the very beginning was the reaction of family and friends to my success and how supremely fortunate I was to be able to share it with the people I love. A good friend of mine, Liam, passed away after a long battle with cancer just weeks before this started. When we used to meet up, he wouldn’t burden me with how he was, but would want to know about what I was up to. I would tell him the little stories about my photography and he loved to hear them. The only regret I have about this year is that Liam did not live long enough to share this with me. He would have loved it and he would have loved taking the absolute piss out of me about it too.

At the moment, I am trying to put together a series of images of the billboards and posters from around the world that I am going to frame and hang at home. I was lucky to get to see billboards for myself in Milan and Tokyo and these will be great ones to get framed, but it will also be so cool to do the same with some of those sent to me from Flickr friends and also from people who I had never known before, but who took the time to get and send me a shot of the billboard in locations all over the world.

So much has happened in the year since I posted the photograph. So much unimagined adventure. And the amazing thing is that things just get better and better.