Five weeks in Asia. Five different countries. Five weeks shooting. Result: I have thousands of images to sort through. While away I was mainly shooting with the iPhone, but I also had the Fuji X100T and Nikon D7000 with me. So, my way of dealing with the images this time is a little different than before. My plan is to go back and organise the images from each location and put together blog posts on each place. This should allow me to work my way through the process of selecting (and more difficultly – deselecting) my favourite images. So, here goes.

Where better to start than Hong Kong. Oh to be a street photographer living in Hong Kong. What an exhilarating place it is. I really would love to live there and get the chance to work more of the series of images I have shot on iPhone there.

I had two short stays there in the summer. The second was extended when a typhoon hit and resulted in a long day spent in the airport. I was never so happy to leave when I did, but now I am longing to get back and hit the streets of Hong Kong again.

I love the vibrancy of street life in Hong Kong. It is a noisy, colourful and fragrant place. What I like most about it is that you can find a location and work it, or if the mood takes you and you do not mind dealing with the heat and humidity you can keep on the move. Both work just as effectively. Also, in Central, the architecture is just amazing. I came across this wonderful yellow facade in Central and spent some time trying to get a shot which might match what I envisaged once I saw this yellow.

I spent about 20 minutes or more trying to get the shot below. You can’t have it both ways. I love that Hong Kong is so crowded and there is a constant flow of people, but when I was trying to get this shot I was driven mad by the people walking into my frame. For me, when I am shooting I create an image of the shot I want to get in my head before I shoot. This one I had envisaged to have more of a division between the yellow wall and the passing red taxi and yellow of the bus.

This one, which lacks the red of the taxi, worked a little better. Still, it is not perfect. Is any shot ever?

Moving up the road from here I found a wonderful entrance to McDonalds – another yellow wall. Another chance to create some fun images. This time I pushed the iPhone up against the wall and hit burst mode to get these split screen reflection shots. Again, in getting this shot I was hindered by the fact that the white van opposite was parked and for the duration I was there shooting did not budge. I had hoped to add more colour to the shot but alas no. Photography is 99% frustration. 99% of the time, or even more, I do not get the shot I imagine in my head.

That’s me in the corner standing in front of a bus stopped in traffic trying to get these layered reflection shots you get when you shoot into glass. I like the result here with the guy’s eyes framed in the way they are here. 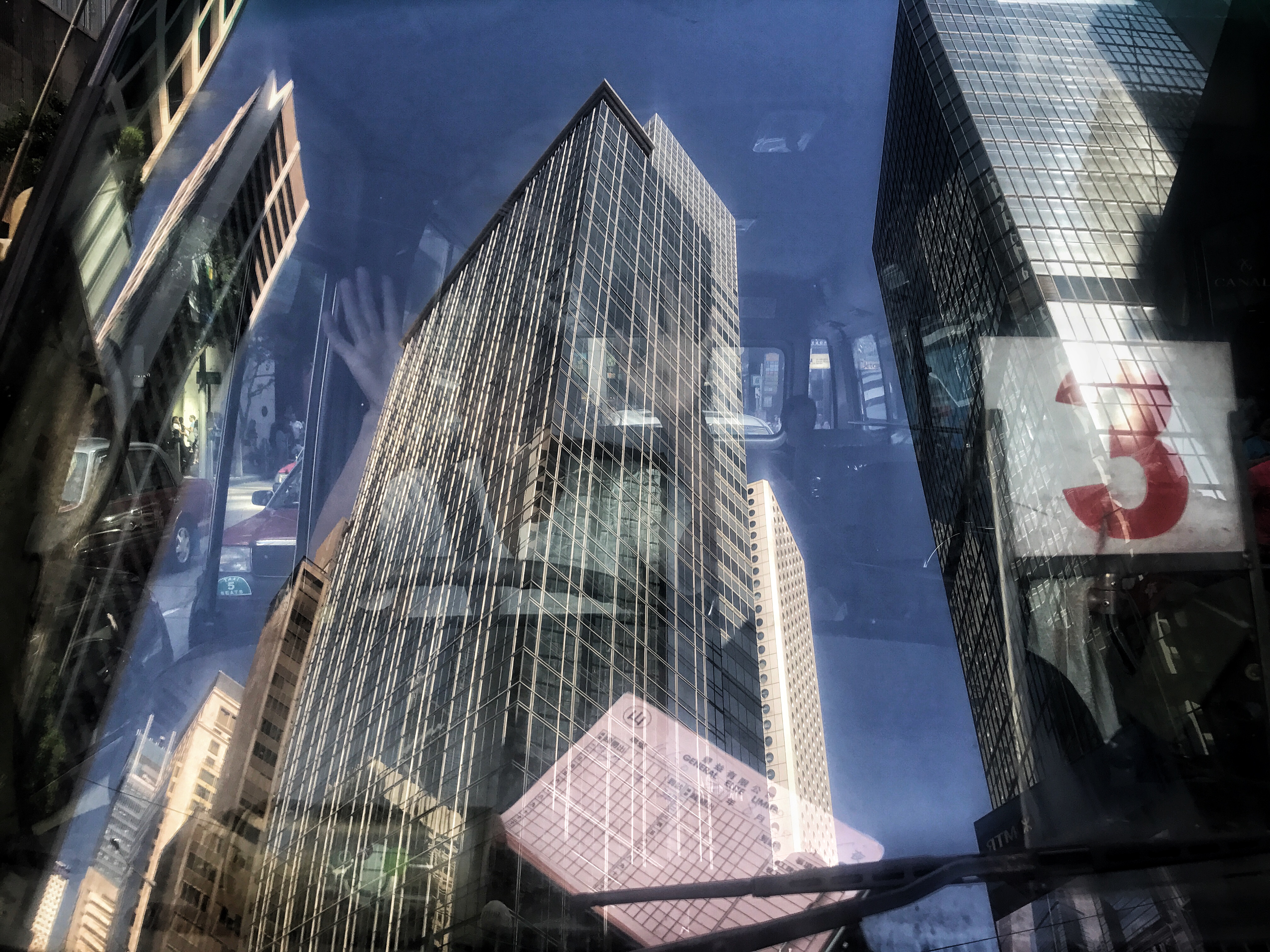 I just love the colours you find in Hong Kong. This intersection in Central is one of my favourite locations. The bright yellow painted markings of the crossing are so vibrant and when you throw in the colours of the traffic and the pedestrians it all adds up to great photo opportunities.

And who can resist the cliche shots when you come to Hong Kong? You can’t pass them up really.

But you can blur it up a little.

I have been saying how shooting with the portrait mode on the iPhone has changed how I shoot on the street. In Hong Kong, I met some characters, none quite as animated or as colourful as this guy.

Or these friendly guys.

If you see it, it’s too late. How true this so often is on the streets. The image below appeared to me as I was walking along checking the shots I had just made. Someone using a paper clip as a cigarette holder. How cool. I had to quickly get things lined up to get the shot. Again, it could have been better – crisper, more in focus. But still I like it.

Look up, look up. Hong Kong has great architecture.

One of the fun things I did this summer with the iPhone was to shoot with the Provoke App. I just love the black and white images it produces. Here are number of those shot in and around Central.

See you next year, Hong Kong!