It is time again to allow yourself dream. To dream that this year is going to be the year that sees that Liam McCarthy trophy come home. The year that your beloved hurlers will conquer all-comers and emerge triumphant in August.

That was my dream as I set out on this photography project back in the month of May.

Sitting in the Hogan Stand in Croke Park on Sunday with 7 minutes to go in normal time of the All-Ireland Semi-Final against Limerick I am dreaming. Dreaming of an All-Ireland Final in 3 weeks. Dreaming a gap of 13 years without Cork winning the Liam McCarthy being bridged. Then Limerick begin to claw Cork back; point by point over the next 10 minutes. With each of these points the dream is distancing. The momentum has swung. Limerick sense Cork are dead on their feet. The Limerick crowd in Croke Park sense it. Cork cannot get a hold of the game.

1 minute over the regulation 70 and Aaron Gillane pulls Limerick level. The score stands at 1-26 a piece. Anthony Nash pucks out. Cork’s Robbie O’ Flynn fields the ball and turns. Racing towards the Limerick goal he sees his captain, Seamus Harnedy calling for the ball. A hand pass in and Harnedy has to jump to control it, but he has the ball in his hand. He takes two steps and readies himself to strike the ball home and put the game beyond Limerick. Three Limerick players line the goal. The ball leaves Harnedy’s hand and he pulls his hurley back to lash it. The sliotar seems to stop in time and space and another hurley, that of Limerick’s goalkeeper Nicki Quaid in flight, stretches across from the right of the goal across Harnedy’s body and bats the sliotar away. Harnedy’s swing continues but there is no ball there to be met. The chance has gone. Limerick work the ball out and up the field to Pat Ryan. Damien Cahalane fouls him on the left-hand side of the square. Limerick have an easy free in front of Hill 16. An easy free to go 1 point up in the final minute of added on time. The dream looks dead. Aaron Gillane taps it over. Limerick lead by a point and there is 73.10 on the clock. Nash knows his puck out will lead to the last chance for Cork to rescue the game. He pucks out. Lehane gathers the ball for Cork on the 70 yard line under the Cusack Stand. The referee sees a foul and Cork have a chance to level the game. Pat Horgan comes out. Stands over the ball. Stoops and rises and in one movement pops the ball over the bar. The teams are level again. And we head into extra time.

For me, the two 10-minute periods of extra time had an inevitability about it. I felt Limerick would not be beaten. Cork had seen their best players go off injured. Limerick’s subs made a monstrous contribution. And it came to pass. Limerick powered through Cork in the end and were fully deserving of their victory. The hurlers of Limerick and Cork left everything they had on that sod of Croke Park. Cork left their tears too. The roar of the Limerick crowd when the final whistle went is still echoing in the stands. Limerick had every right to rejoice. Cork will have a lot of questions to mull over in the dark winter months ahead. As Joe Cole, a Cork fan, said to me before the first Cork game of the championship: “‘Winter is sad until we get going again in summer.’  The summer of 2019 seems so distant now, but the dream goes on. For Limerick, the dream is alive. In a little over two weeks they will come to Croke Park again. This time they will play for the biggest prize in hurling. I believe they will win it.

Sunday’s match was not the easiest for me. First there was the rain. A lot of rain. Not what you want when you were are not dressed appropriately for it and not what you want when you want to stop and engage with fans on their way to the game. At the best of times, stopping fans on their way to the stadiums is not the easiest of things to do. Usually there is a convoy of people making their way along the footpath or road to the game. Stopping them can result in holding up those coming behind. In fairness, the people I have met have all been so patient and supportive. Sunday was a little trickier. The rain was bucketing down for a good hour before the match. I didn’t feel comfortable stopping people in the rain to get their photographs.

“I used to go to all the games. I’m De Chief. I used to have an Indian headdress.” “I’m not going to the match today. I just came up for the atmosphere. I’ll watch it with some buddies in The Shakespeare.” Cork super fan Ger ‘De Chief’ Feehan.

These two neighbours go to all the matches together. “Pa loves to dress up and sure why not. He looks great. Look at those shoes.” Liam Goodwin told me. “Beating Kilkenny was like winning the lottery for me. Better! Everything is possible now. We got them off our back.” Pa Buckley said. 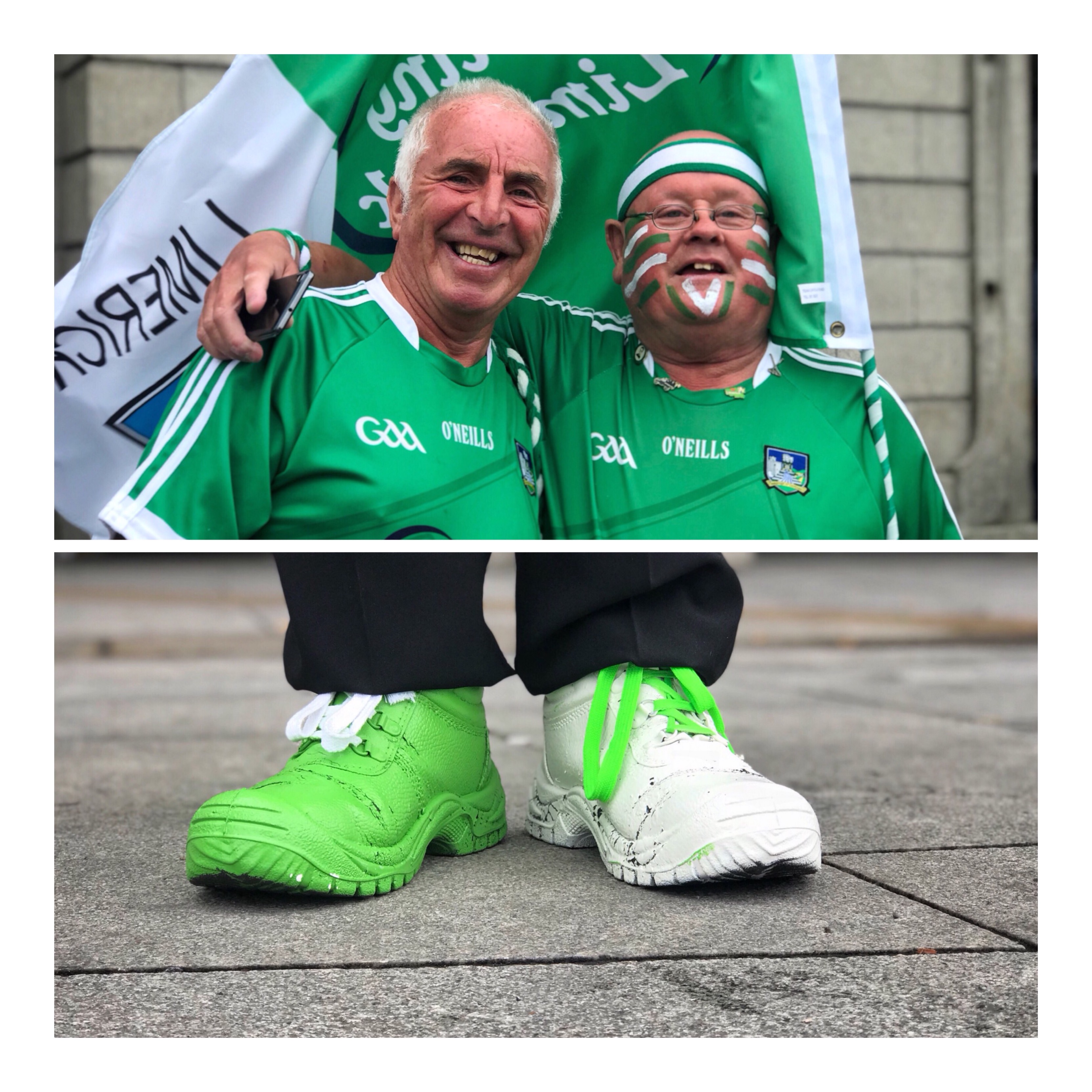 The Dalton family from Limerick. “What’s the best thing? I asked. The buzz; the thrill of it all!” The father Paddy told me. “We always go as a family. Always have. It’s what we do.” 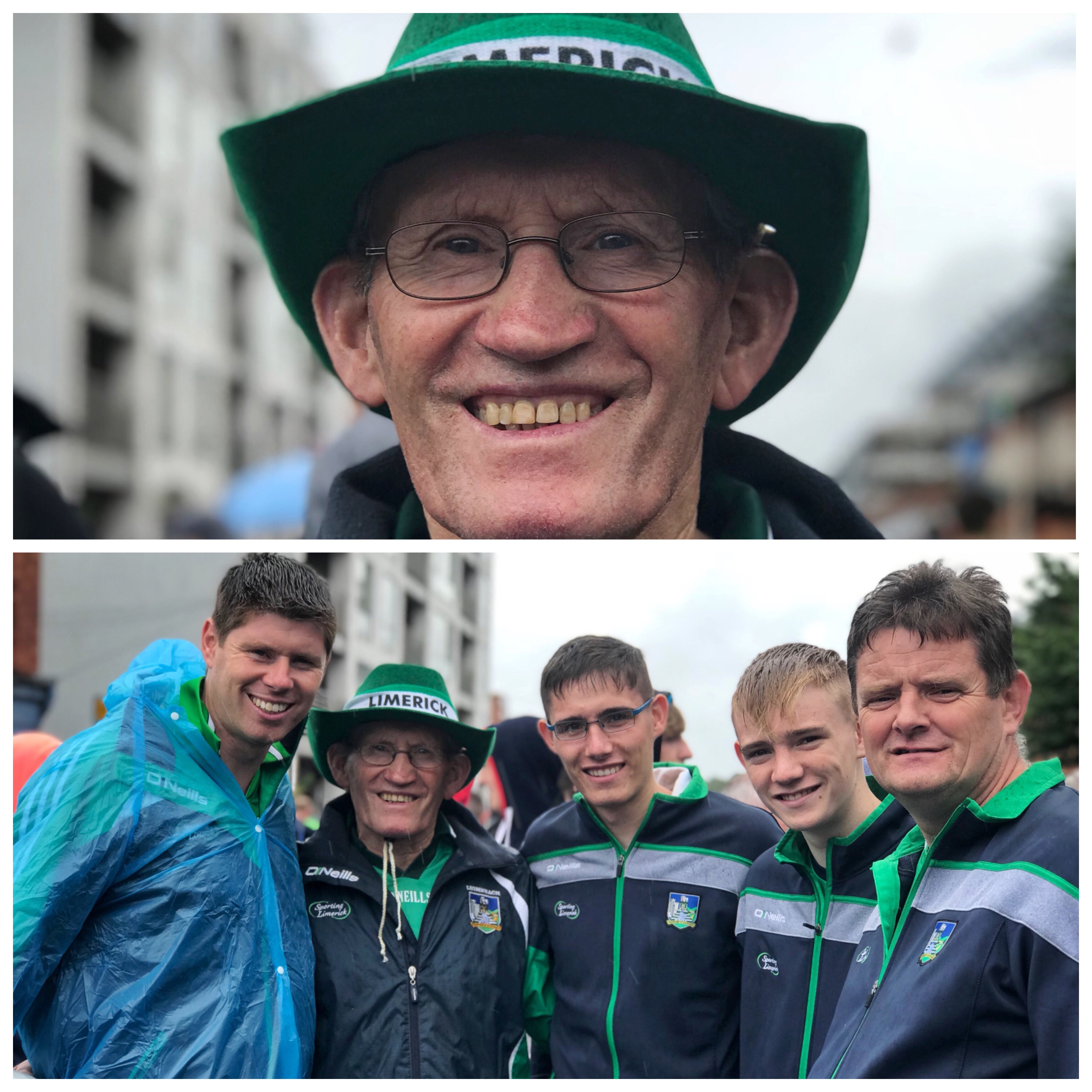 Two Cork supporters, Tom McCarthy and John O’ Connor. “We grew up in Millstreet. It was football all day long, but that’s changing now. Before there’d be no players from there on the Cork team, but now sure we’ve Mark Ellis.”

“I just live five minutes away. Ya, it’s great. I get discounted tickets and I can cycle to the games.” “Can we make the story that you cycled up from Limerick? I asked. “If you want to, ya.!” Local teacher Rob Griffin is a teacher who lives in the Croke Park area.

Cork fans dressed for the rain 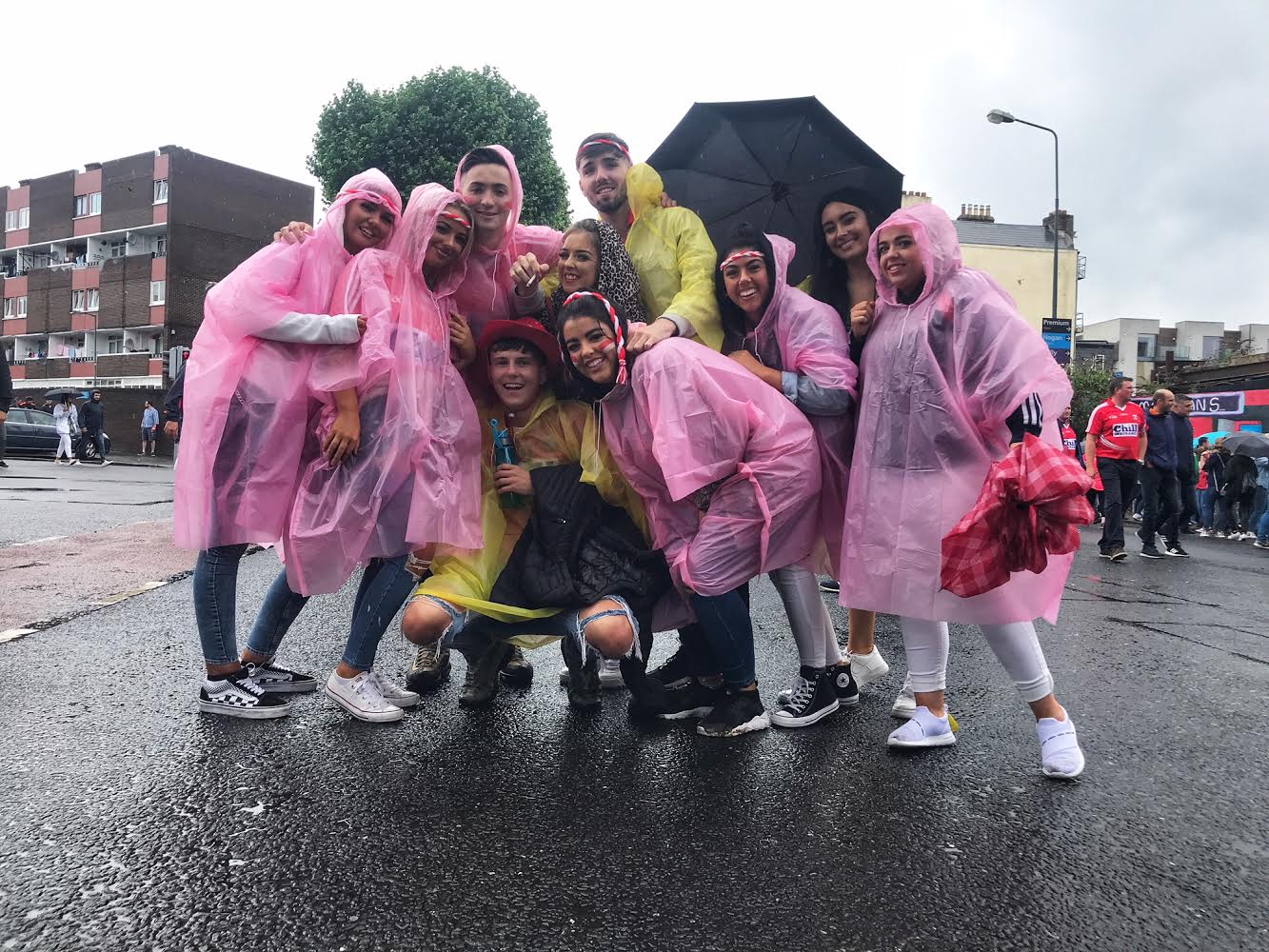 Limerick fans – No more about it! 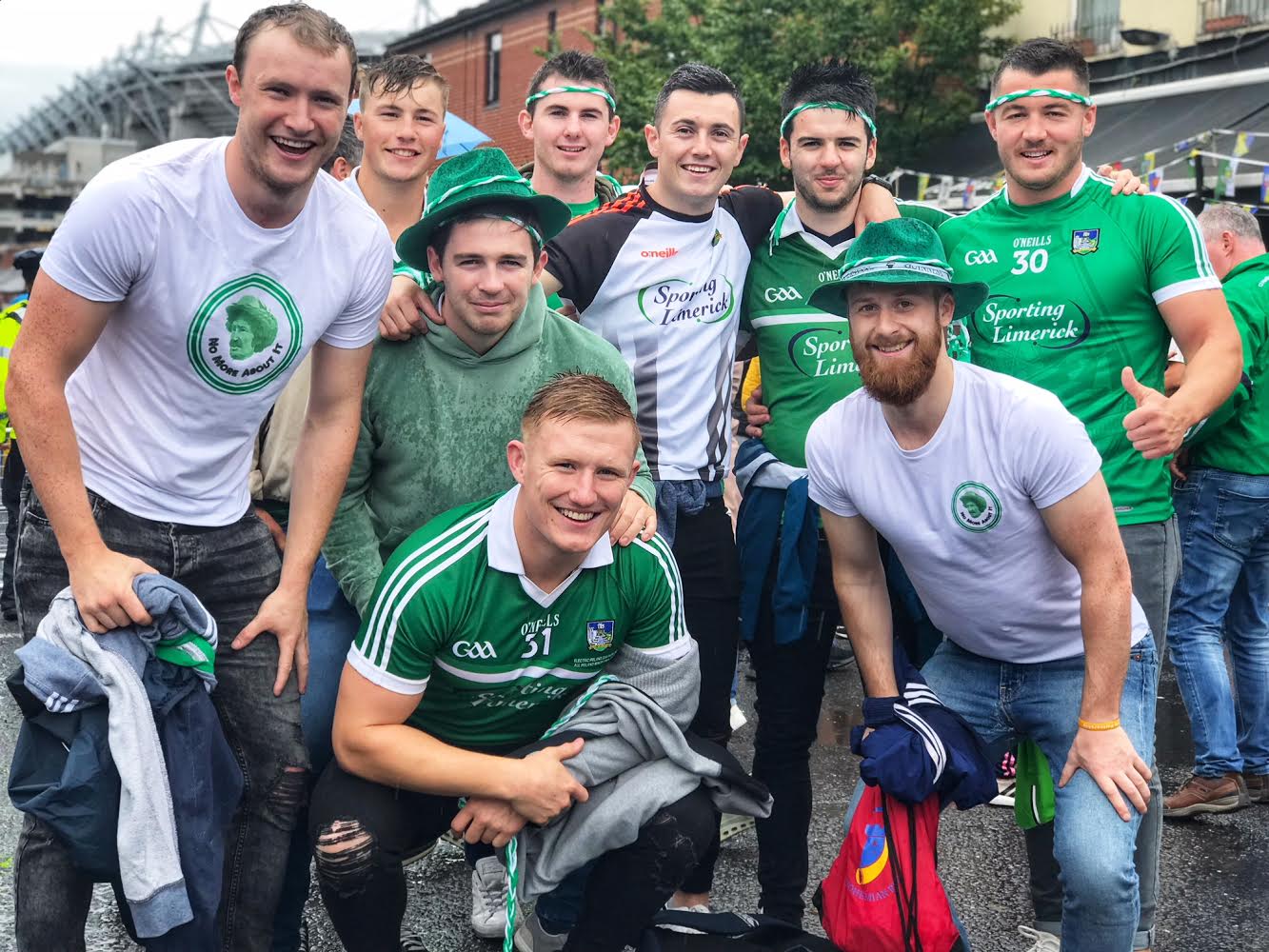 Fans on their way to Croke Park

Throughout this project I have never hidden the fact that Cork hurling means everything to me. I am not impartial in any way. I admire and respect all counties and am happy for the wonderful Limerick fans I have met on the way. When I was in the tunnel of the Gaelic Grounds in June I loved that they had murals depicting the greats of Limerick hurling down the years, but it really struck me that it was so long since they had won an All-Ireland. 45 years. Many fine Limerick teams and players have come and gone in that time and many times they got close to bringing Liam McCarthy Shannonside again, but didn’t. I have a feeling this is their year. I really hope that they have not peaked and that they can reach an even higher level in the final. They play a great brand of hurling. Dynamic, skilful and powerful hurling. It would be great to go to the Gaelic Grounds in 2019 and see new murals on the tunnel walls of this young Limerick team with the Liam McCarthy trophy.

I have loved following the rebels this year. There were some glorious days. Sure, last Sunday was a bitter disappointment, but I am immensely proud of the team and the management. They gave it all they had.  They played some blistering hurling along the way and while the manner of losing a 6-point lead on the home stretch will cause anguish, I am sure that will come back stronger, better for the experience. The dream lives on. Here’s to 2019. Here’s to number 31. Rebels Abú!