Rain in Tokyo and an evening to myself, I decided to head to the Mori Art Museum in Roppongi to visit the Andy Warhol exhibition. I have always been fascinated with the work of Andy Warhol, but not such a great admirer of his art. How the rich pay multiple of millions for one of his pieces baffles me. For me, art has to have beauty or honesty in its core and there is a lack of this in the work of Warhol. I get his interpretation of the times he lived in; I get his intention, but it leaves me cold.

Roppongi in Tokyo is skyscraper territory. Roppongi Hills Mori Tower is one of these skyscrapers which houses the Mori Art Museum and has this iconic spider sculpture by Louise Bourgeois outside its main entrance. I had seen photographs of it before and one of the attractions of visiting here was the chance to photograph the sculpture. But how? I experimented with many different angles using both the iPhone and the DSLR, but none seemed unlike a cliche shot to me. Eventually, I managed to get one I liked with both the iPhone and DSLR. The iPhone one is washed and processed a lot, but I think it suits the sculpture to be treated like this. 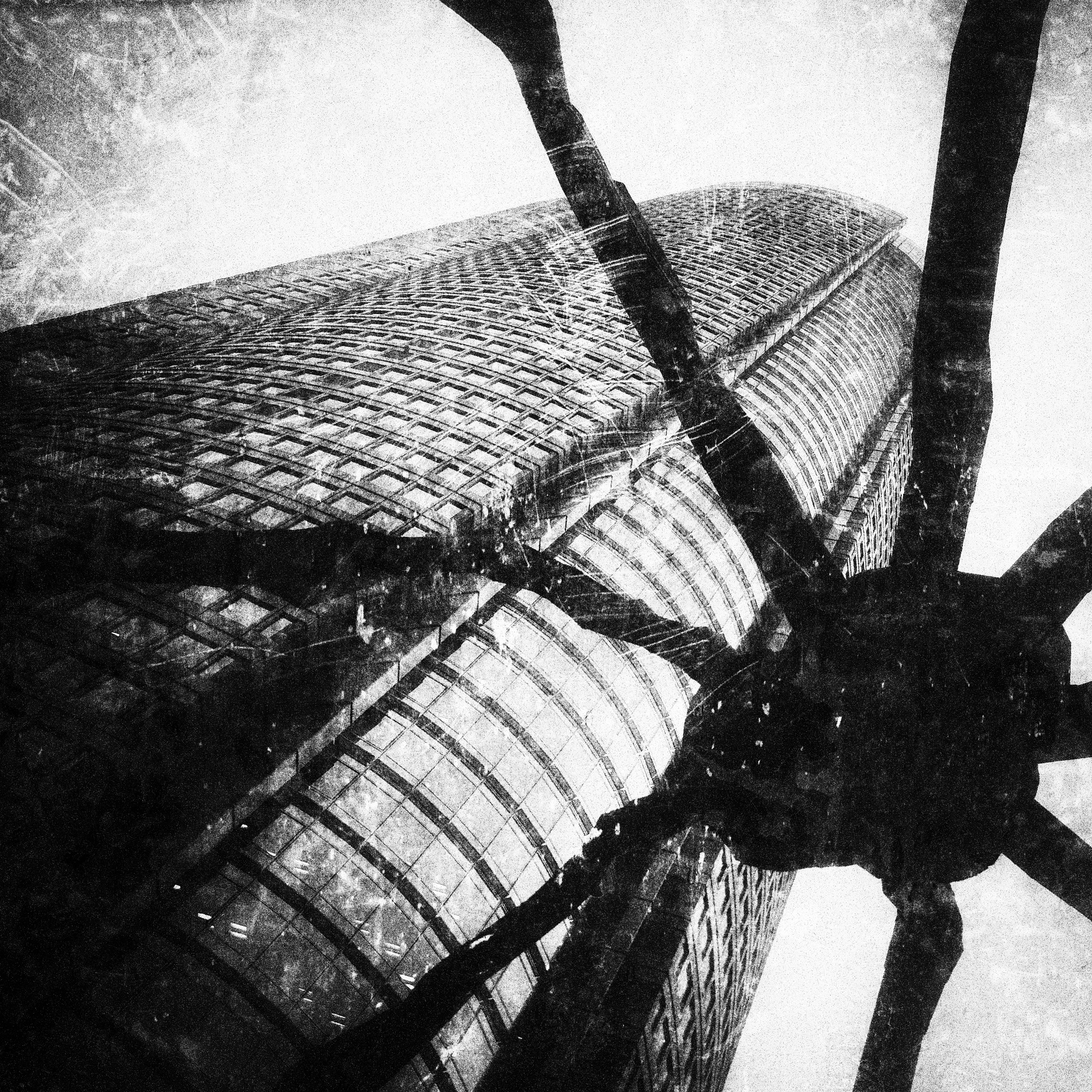 The DLSR is a cliche shot, but I like it. There is always competition for position around often-photographed places. This guy had walked over me as I lay on the ground getting the iPhone shot. I was pleased he stayed around as I continued to try to get another shot. 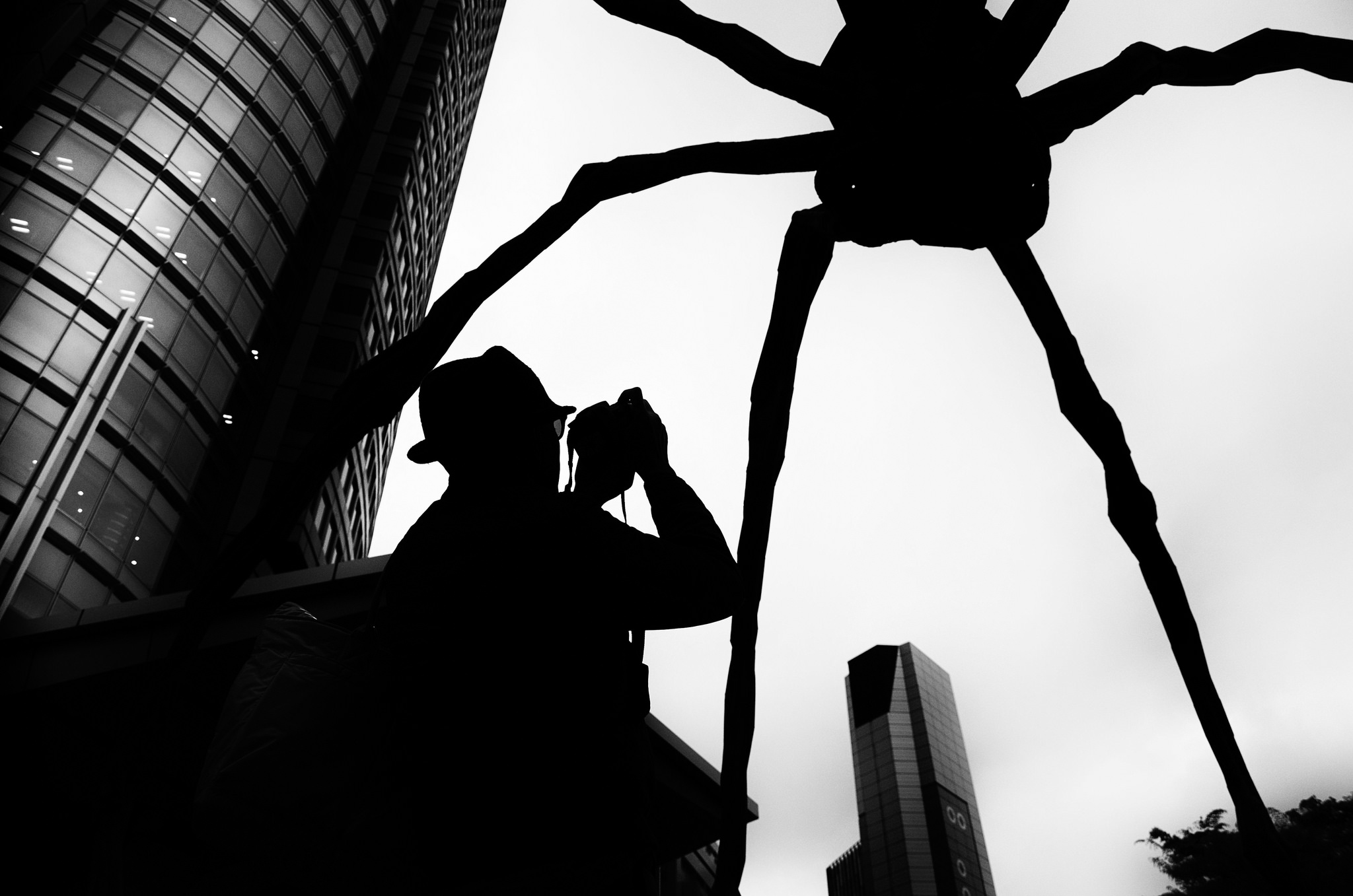 The exhibition was, like so many things in Tokyo, crowded. I entered with the iPhone in my hand and the DSLR hanging around my neck. After one quick shot of a Warhol portrait I was surrounded by staff who reprimanded me and reminded me that photography was strictly forbidden. A pity. I really wanted to get photos of people looking at the art, not so much of the art itself. 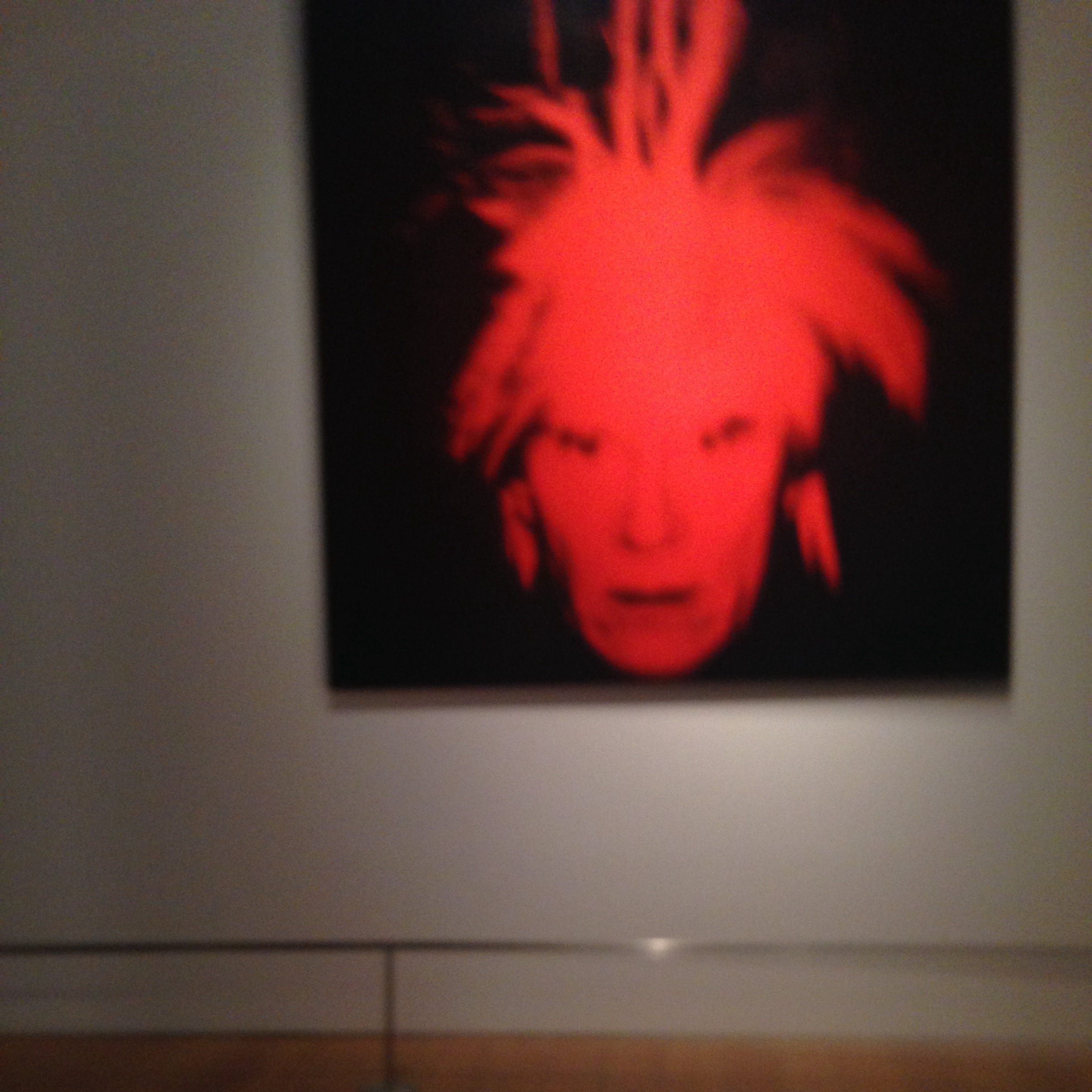 The exhibition itself was moderately interesting. They had recreated Andy’s studio and it was fascinating to imagine the comings and goings of the rich and famous people of Andy’s time. He sure was a trailblazer in getting us all obsessed with the lives of celebrities.

After picking up some souvenirs in the gift shop (I love art galleries’ gift shops!), I headed to the observation deck to check out the views of the sprawling metropolis that Tokyo is. Raindrops formed their own lines of traffic on the windows and the ubiquitous jazz music playing in the background created a beautifully melancholic mood to view Tokyo as the evening light slipped away. 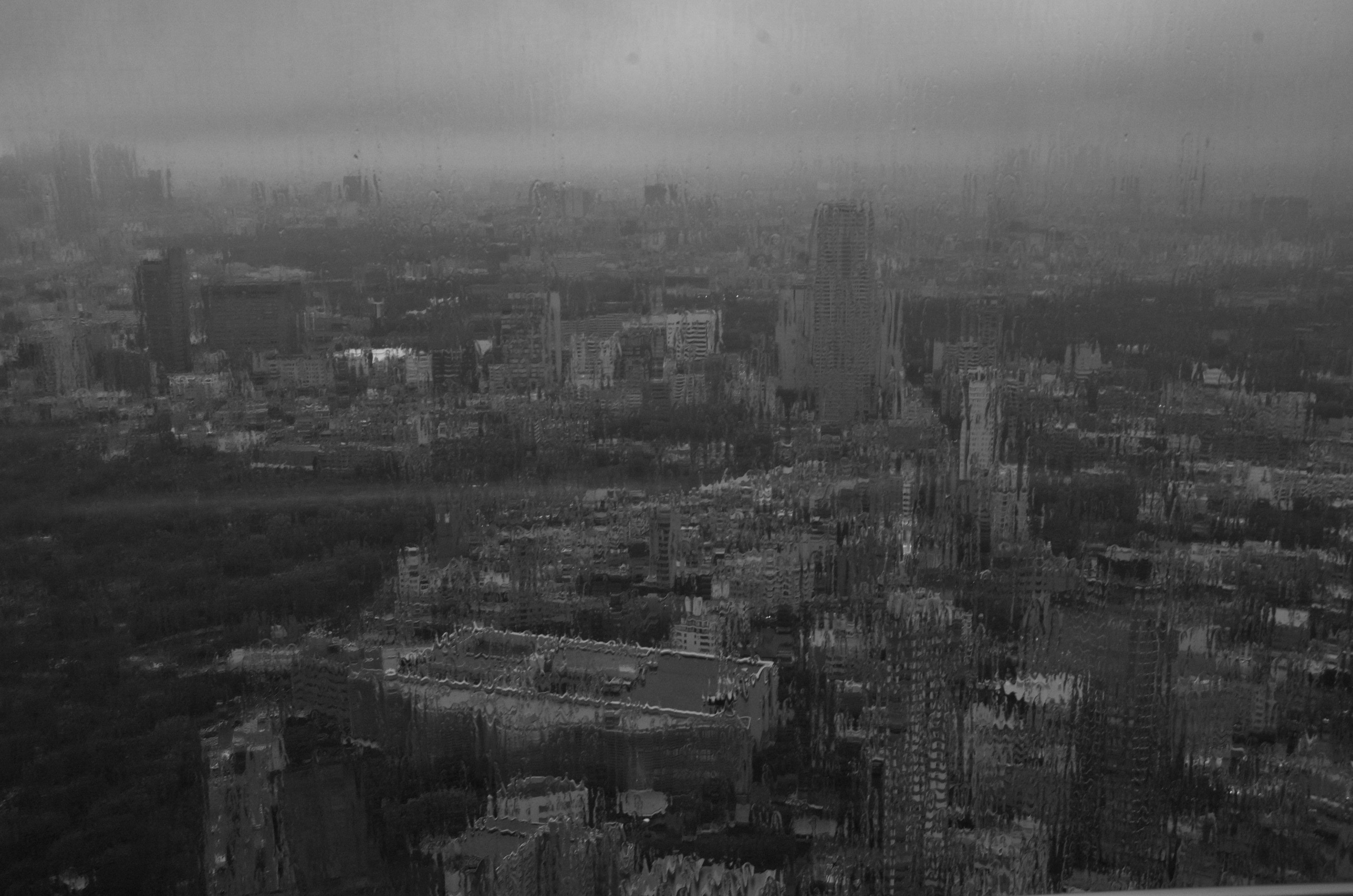 There is a wonderful calming quietness that comes from viewing a monster city from high up. The city appears free of its manic momentum. I love these buildings and the vantage points they provide. I love to stand back and observe others as they take in the view. It makes for great photographs. Photographs that exude a dreaminess. One of the themes I keep coming back to in my photography is distances. Distances, physical and emotional. Especially in couples. What can you imagine from this couple based on their proximity? 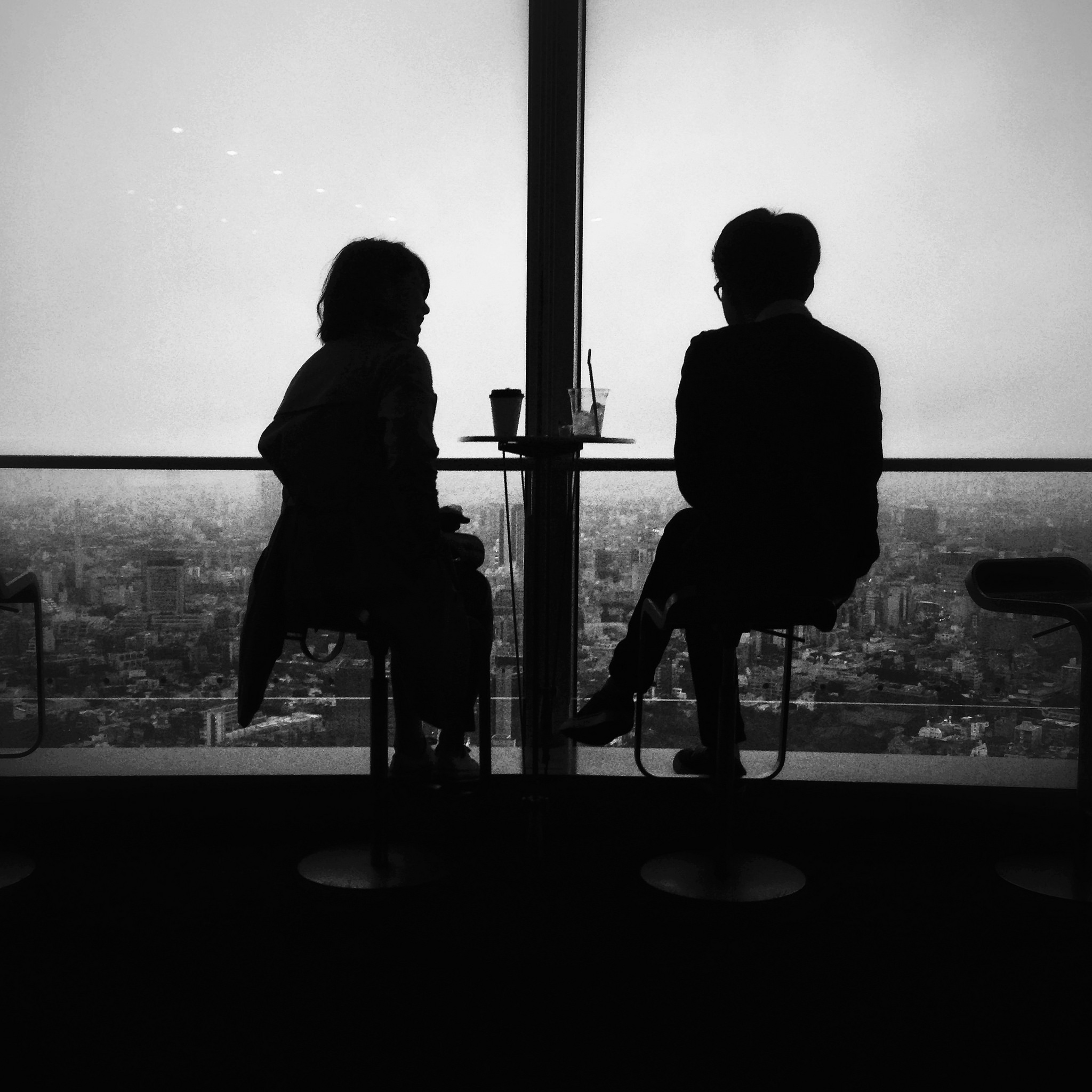 How about this pair? 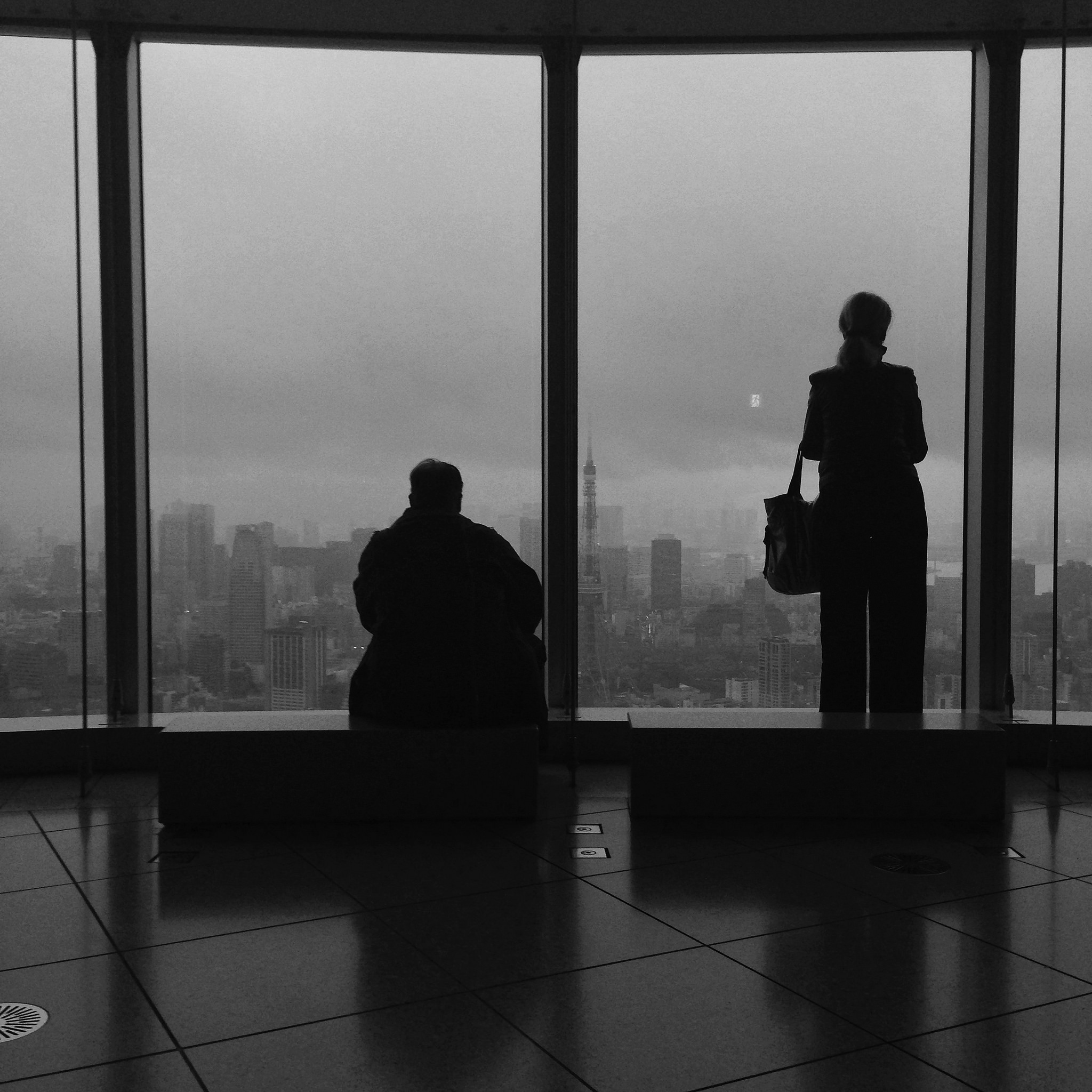 I spent time lurking (sounds worse than it was) behind people framing them taking in the Tokyo skyline. This couple spent minutes apart lost in thought looking out on the cityscape. 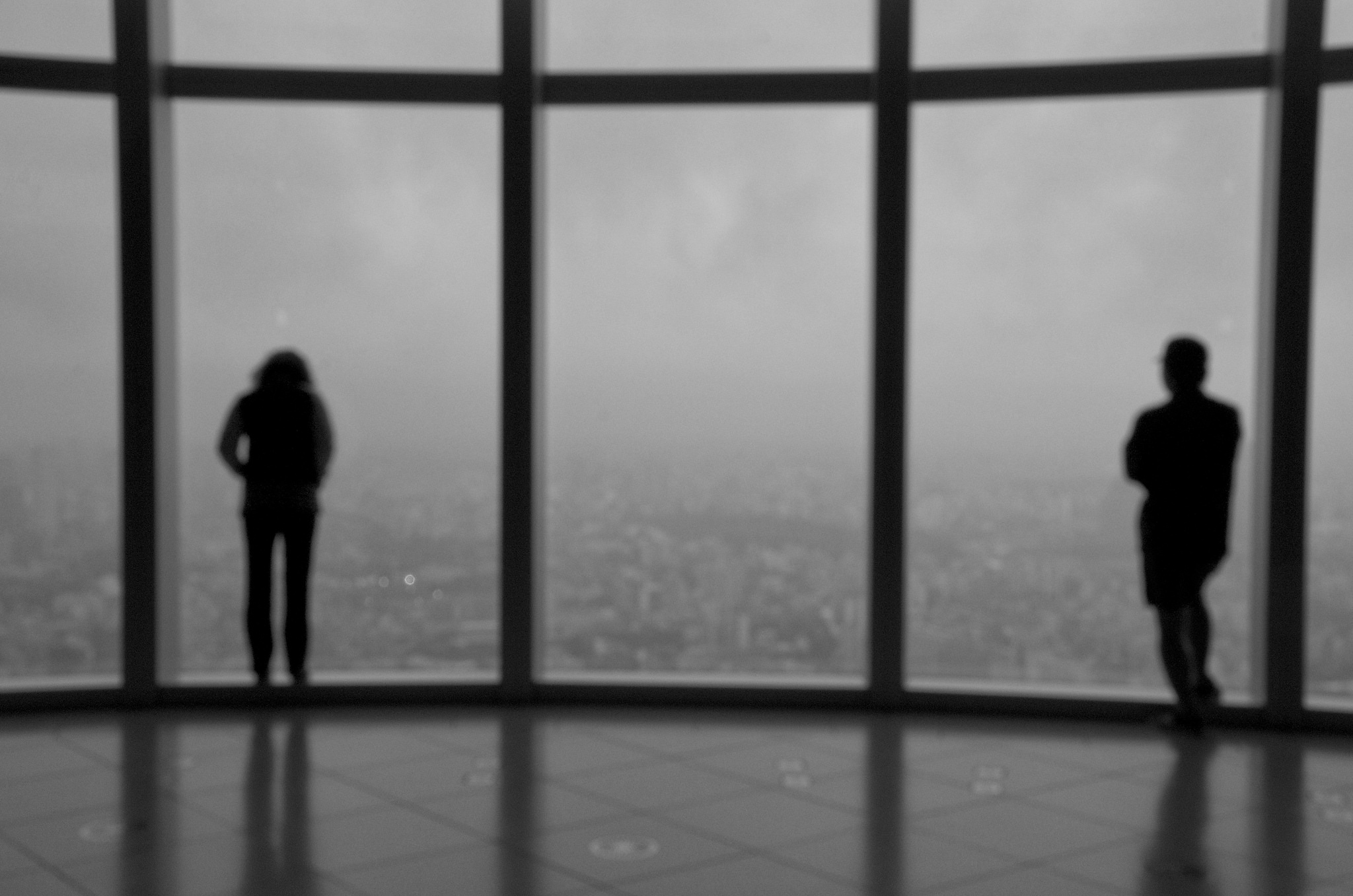 Then came together for a moment. 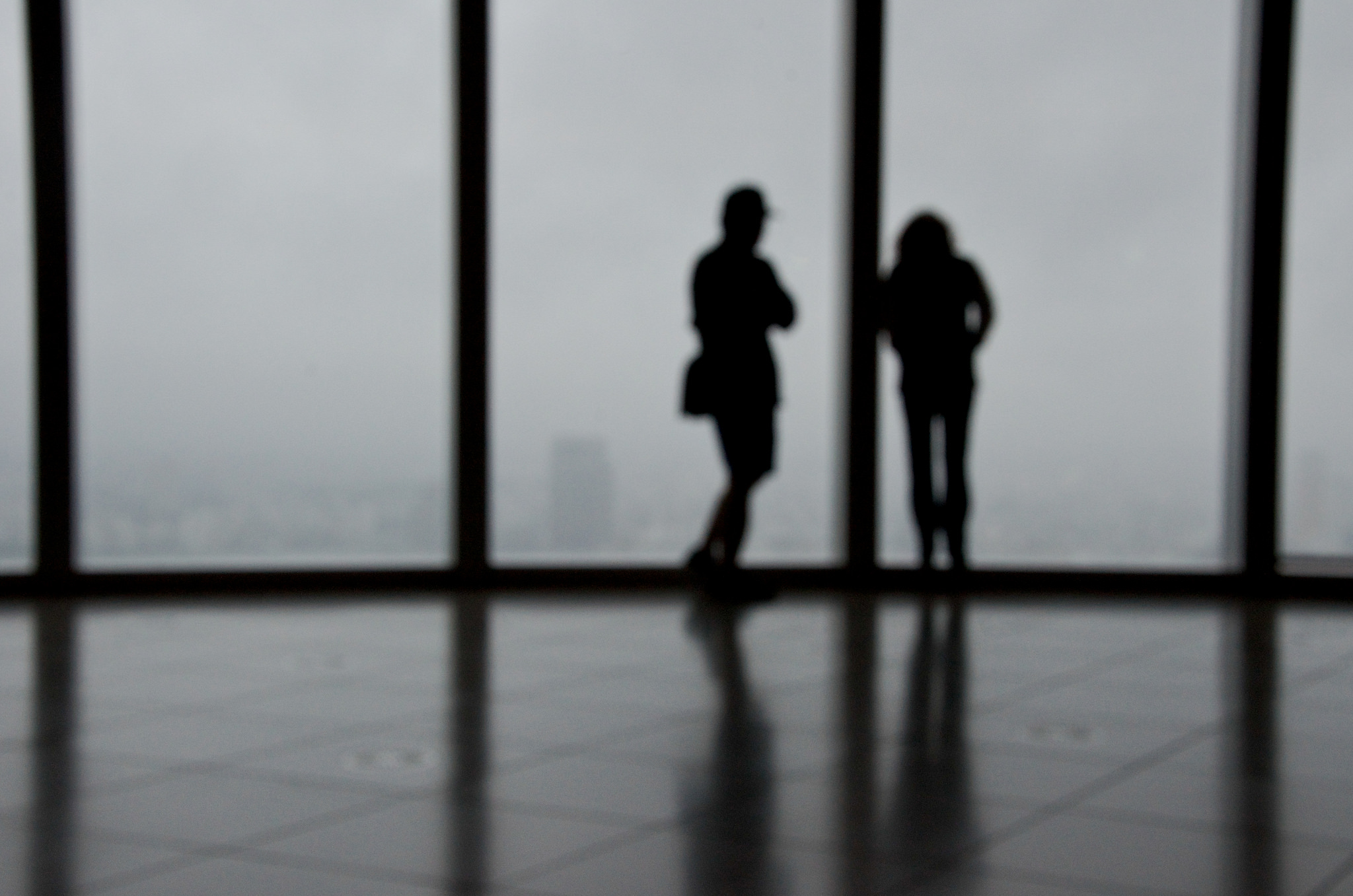 Only to part again. 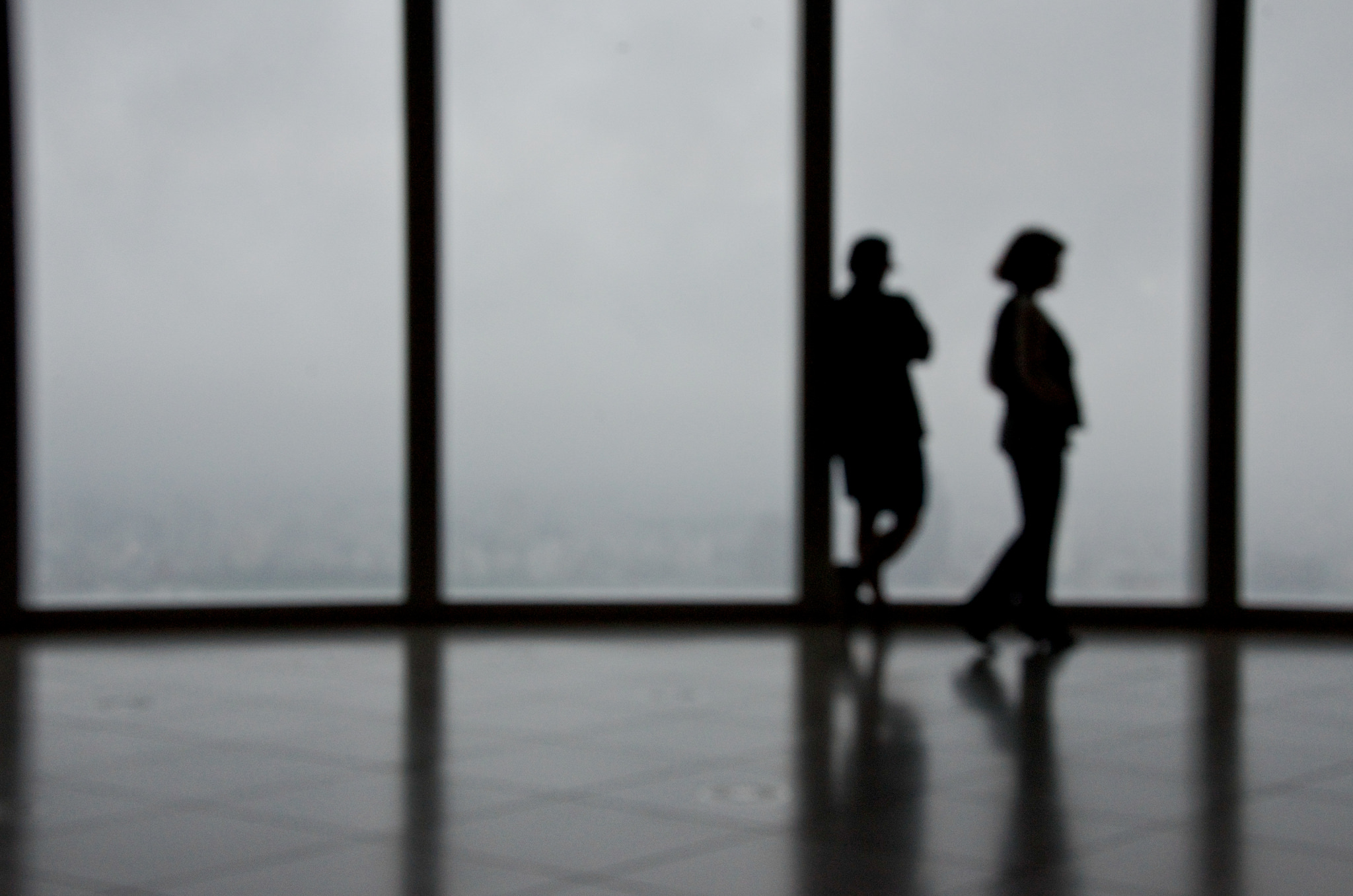 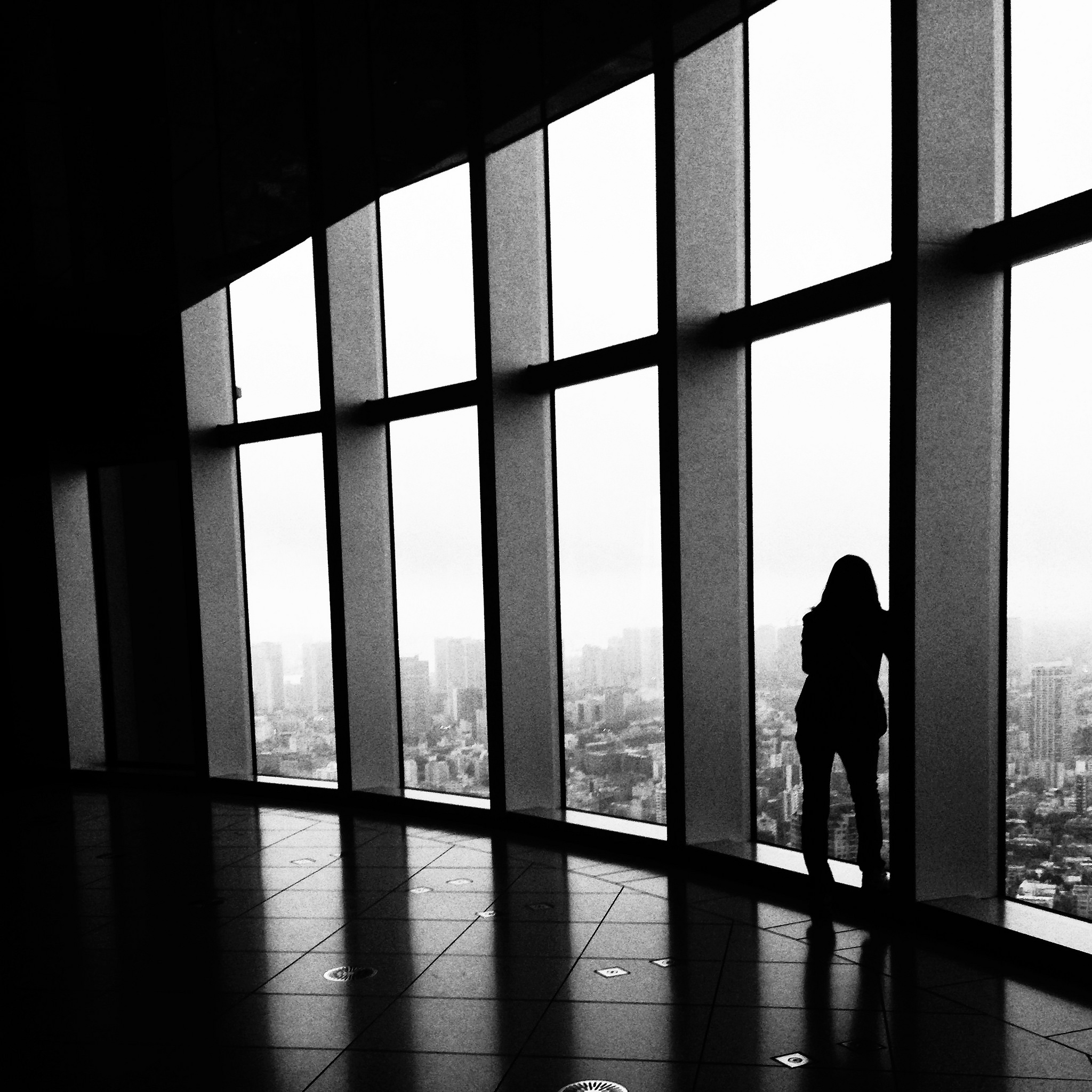