Rain! A good thing or a bad thing when you want to get out on the streets and shoot? Different opinions on this, I am sure. Some love the reflections and colours wet roads and footpaths create (pavement, sidewalk, footpath). For others, I guess standing about in the rain getting soaking wet is not that appealing. But hey, sometimes it has to be done. You get itchy to get out and the weather is not going to hold you back. Last winter, when I ventured out on the streets of Cork it seemed to be raining all the time and coming from a place where rain seems to be a constant threat sunshine and bright light is a treat.

Heading to Asia, I was dreaming of sunshine and hitting the streets. But it didn’t always work out like that. When I got back from Japan to my wife’s hometown, I was met with incoming storms with the most torrential rain and the next four days the rain did not let up. After two days of being stuck in home I was itching to get out, itching to get out and get some new photographs. So, I buckled up and braved it. I got one of those shower caps they leave in hotel bathrooms and used it to cover the camera. I knew this would give a lovely distortion to the photographs, which it did, but it also made it hard to adjust the settings on the camera.

Am running a little series of these over the next few days on Flickr. This one below was taken as I stood in a doorway out of the rain. When I peered out to survey the scene, I saw a kid on bicycle, on his way to or from school, pedalling past me with a transparent umbrella over his head. A little late as I would have preferred to have got him coming towards me, but still I like it.

I have processed all these images similarly. I imagine I will post three or four of them on Flickr and the full series here when I am finished on Flickr. As I was saying yesterday, I find interest in any series of images I post dwindles after day 4. 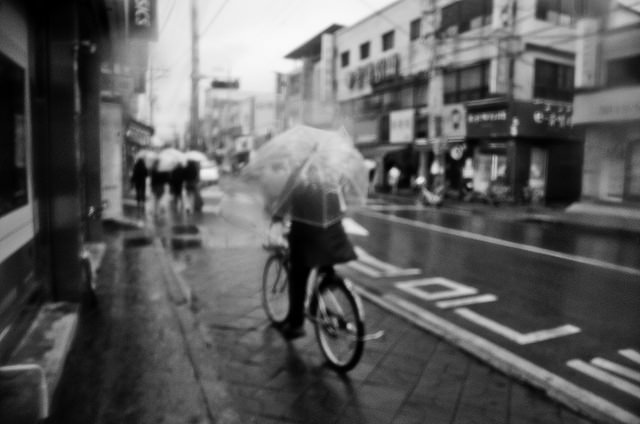 The slowest of jazz music

Something a little more upbeat for the iPhone image. This is taken in the underground in Daegu. It is a typical street scene with the billboard behind giving an interesting backdrop. The great thing about big cities is that you never have to wait too long for people to pass, and when there are crowds you can even steer them into your scene with a tactical positioning as they approach. Snapseed again here. Converted to black and white and little work done on the contrasts.