A week of my personal favourites

I was asked to post some of my own favourite photographs on the blog and to give some background to each one. The first one I have chosen is from a wonderful driving holiday I had with my brother in 2006 in the Spanish and French Pyrenees.

We spent a couple of days in Cadaqués, the birthplace of a little known Catalan painter, whose name escapes me.  Arriving there, descending the corkscrew hills into the little seaside village took forever. The traffic edged forward at a snail’s pace.

In the evening, rain fell as if the sky was emptying itself. It brought a freshness when it passed. The air was crisp and the smells of Ducados cigarettes and seafood  lingered in the August night. As ever, I had my camera with me. Then it was a little Nikon point and shoot.  And when before me a young girl dressed in red passed, I pointed and shot. Those days blur was an accident, a disappointment, and very often in those early days of digital cameras a blurred photograph upon inspection was quickly deleted. However, I remember seeing the blur of the motion, the colours seemingly dragged along and I loved it.

Many of the best things in life are the results of unintended actions.

I will post one photograph from my own personal favourites each day this week. 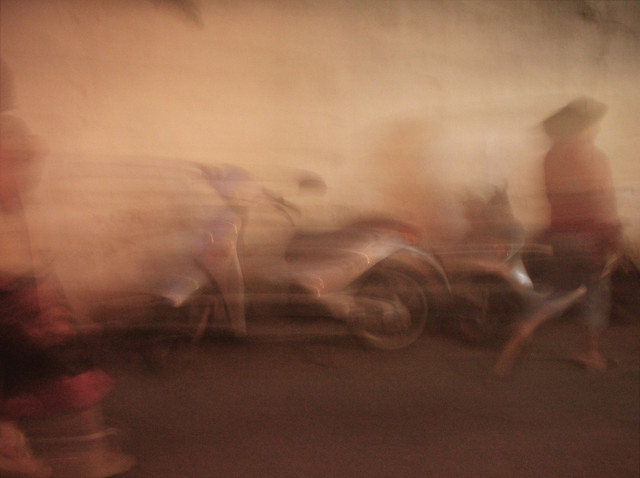 And with that she was gone