I finished writing my blog post yesterday about an hour before I went on live radio to talk about my photograph with Dave Fanning12. Driving over to my parents’ house to take the call, I realised that radio is perhaps not the best medium to talk about photography and that I would need to be as descriptive as possible to paint the picture of my photograph. I had chosen to go to my parents’ because with two small kids in the house it would have been hard to get a quiet space needed to take the call.

I was told that they would contact me between 11 to 12. Being a stickler for time-keeping I was ready well before 11. Waiting. Playing over and over in my head what I imagined the conversation might be like. I told myself to relax, to enjoy it. At 11.35, the researcher from the Dave Fanning show called telling me they would call back in five minutes and to be ready. I was ready.

I had the phone in my hand waiting for the call to come. Checking updates on Twitter and Facebook when an email came in from a very good friend in Hong Kong asking had they missed the interview. “No, any minute now. Get online to RTE2 and listen!’ Any minute now.

And then that minute came. I left the phone ring a few times, took a few deep breaths and answered. “Hold the line and Dave will talk to in a while.’ ‘OK, great thanks’ I said. A song was playing and I was on hold, waiting to do an interview with Dave Fanning. Crazy! Then that unmistakeable voice came in talking over the end of the song. A voice that *** right through my teenage years.

“What happens when the right person stumbles across a photo you took and they want to use it?  Well, It happened to a Cork man, Brendan Ó Sé, by name, and a photograph that he took on his phone is on billboards all around the world, and he’s on the line now. Brendan how are you?

And my interview with Dave Fanning began. You can listen to the full interview here. Scroll down to see the link.

I was really pleased I was able to get in the request for my friend Liam who had recently passed away. He was a dear friend who would have loved all of this. I just wish he could have been here for this. After the interview, the beep beep beep of the phone started. Messages of congratulations came in from family and friends. I found myself very emotional after the interview and found it hard to talk even to my wife. When things settled a little, I began to read the messages sent in to me. All were so full of praise and kindness. They meant so much to me.

My parents had not heard the live interview. So, about an hour later I headed back to their house on my way to work and cued up the interview on my mother’s laptop. I was in a bit of rush for work and did not have time to listen to the interview myself, but as I was heading out the door  it began playing for my parents and I heard Dave Fanning introducing me. How cool! I don’t know if I will listen back to it. It is strange listening to your own voice.

After the interview, it was great to get tweets from people who had been listening to the interview and in particular from people in Cork. Some of them were really kind. This is one I enjoyed a lot, particularly as the European headquarters for Apple are in my hometown, but there is no promotion here. I should get on to Tim Cook.

While in work, I was able to check the phone every now and then and I was thrilled when I saw an email had come in from a Flickr friend, Dirk (check out his excellent Flickr stream), based in Hamburg with images of my photograph on billboards there. Wow! A very big thanks to Dirk. I like the way he composed the shot with pedestrians crossing. It is a fine composition.

Later in the evening, myself and my wife went out for a meal to celebrate. It was lovely to get some time together after the all the excitement of the week. When we sat down in the restaurant, I said to her I would turn off the phone so as not to be distracted by Facebook or Twitter updates. “No, no, no, she said. I want to know. This is why we are celebrating and it is so exciting.” I left the phone on and during the meal a few updates came in via Twitter. One of these was a a link to an Instagram shot of a billboard on Freeway 280, just outside San Francisco. This one was surreal. There was my image on billboard perched on the side of a green field taken from an open stretch of the highway. It looked crazy.

Immediately, I got on to Instagram to make contact with the person who took the shot and to see if they would be so kind as to send it to me. She agreed and the next day she sent me another shot of the billboard this time taken from her car. Part of this whole experience has been the people I have met along the way and the positive responses and kindness they have shown. Barbara is a great example of this. Thanks Barbara.

Definitely, one of the great things about all of this is the little community that has developed among the photographers who are part of this campaign. We are all working together trying to unearth our images in the different locations around the world. I have been really struck by the kindness of some people. Nat – @pineylonesome – came across my image on a billboard in San Francisco that someone on Instagram had posted and alerted me. Cielo de la Paz – @cielodlp has offered to drive to this location (apparently on the 280 freeway) to see if she can get a shot for me. Jen Pollack Bianco @lax2nrt has been particularly kind in taking many shots of the billboard in Hollywood. And I really cannot leave out Megan who is doing such great work trying to pull all the images from this campaign on her Twitter account @ShotoniPhone6. If you come across any #shotoniphone image, you should send them to her. And please, if you see my shot, send it to me.

It  was really nice to see the piece on the Irish Examiner was one of their most popular on the day it was posted. This one is really pleasing because, while this is one of the biggest national newspapers in Ireland, it is Cork based and known to all in Cork as de paper.

There have been so many appearances of the image on different media sites over the past few days and I have been gathering them together. These reports tend to make a selection of images to make their reports and it is so cool to see that mine is chosen so often. The Huffington Post’s report of the campaign was a real thrill. It used my photograph as the lead image of the report. Thanks to my friend, Jon-David for sending me this.

Another one very cool one was seeing my image on Time Online’s report.

Looking at the headline to many of these reports and you will see the same sort of headline. Show people an image taken on the iPhone and more often than not the response it first elicits will be “I can’t believe that was taken with an iPhone!” I have been hearing if for years and I know it is understandable, but do you ever get someone responding to listening to music on a iPhone saying “I can’t believe that this music sounds so good on an iPhone!”? No! There is an expectation that the technology can allow for music to sound great from a phone; but to produce really beautiful photography from a phone? Never. Well, yes it can! And it has been like that for years now. Check out the standard of iPhone images on one of my iPhunography Flickr group. There is some stellar work being done in the mobile photography world. If you are looking for people to follow, here are a few I recommend. @mdkistler, Mark T. Simmons, @shelserkin, Janine Graf, @mimokhair, @leethatch, @lee_atwell, @albionsamson to name but a few. There are so many I could list.

I woke up on Sunday morning with a direct message on Twitter from Fábio telling me he had seen my photo in Chicago. It is so cool when people I have been sharing photography with over the years find the photograph. I do wish it was not such a treasure hunt, though. My fear is that this campaign will end and I won’t have seen all the places where the photograph was posted. I am still waiting to see billboards from Kuala Lumpur, Bogotá, Charlotte, North Carolina, and Milan. We have been told that the image is in 70 cities, but where exactly, we do not know. It adds to the excitement when you find one, but I would love to know where they are. Particularly New York. Unfortunately, my brother, who is in New York for the weekend, has not been able to find the poster of mine there. I had seen a shot of it earlier in the week from the Port Authority metro station, but he went there and was unable to find it. It is a real pity because I had hoped to get a shot of him standing next to it. That would have been super cool. Who knows maybe today he will be able to find it. Let’s hope. So, please if any of you find my image anywhere, please take a photo and send it to me.

Big thanks to Fábio, who sent me this from Chicago. 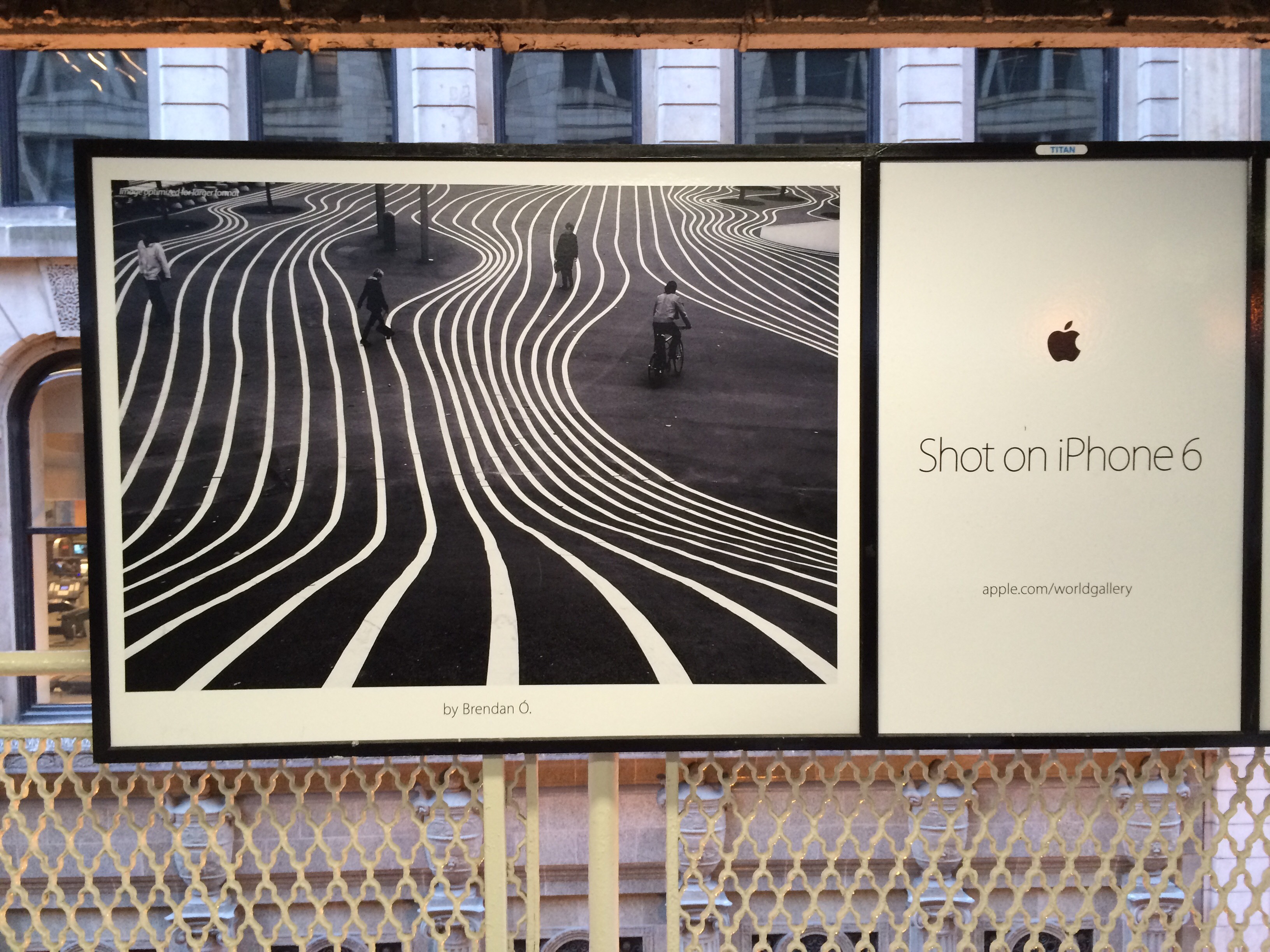 News about Milan. Originally, we had no sitter for our two small kids, but my sister has now kindly offered to mind them. This means that my wife will get to travel with me to Milan. That is just so cool. Got to say thanks to my friends who also offered. Thanks!

You can read about Part 1 here and Part 3 here.