Coming back to old photographs

When I was in London for the Meet the iPhone Photographer event back in April, one of the questions put to me by an audience member was if I could reshoot a photograph which one would it be? My immediate response was that I did not know; it wasn’t something I spent time thinking about. But with a little time to gather my thoughts I realised that I would revisit every shot and I doubt if I would want to replicate anything in the process. Every photograph is a small step in the learning how to become a better photographer.

Do photographs change over time? Do you miss something in a shot when looking at it the first time around? I am not so sure. But with time we do see things differently. Often photographs will sit overlooked in my iPhoto library (I use this for storing – Lightroom for processing) once I have selected the handful I want to work with for processing. Time will pass and often by chance I will open up the folder and it never ceases to surprise me how images I had glossed over now get my attention. What is that happens?

Over the next couple of months I have set myself objectives in things I want to get done. One of these is to get order into the way I store and categorise my images. It is chaotic at the moment. So much so, that in May I lost over a thousand images when I inadvertently deleted a desktop folder connected to Lightroom. The lesson has been learned.

Over the next number of weeks I will be going back over old folders, pulling out old, overlooked images. Should be fun. Should be informative. I know it will get me back into the groove of that imitate – assimilate – innovate cycle.

Here is an image taken in March. The guy in the image is Michael Kistler. The location is up on Richmond Hill in Cork. The view is Cork’s northside. The church steeples can be made out – but not sufficiently. And that is good – because it obliges me to get back up there and shoot again. All part of the learning process. 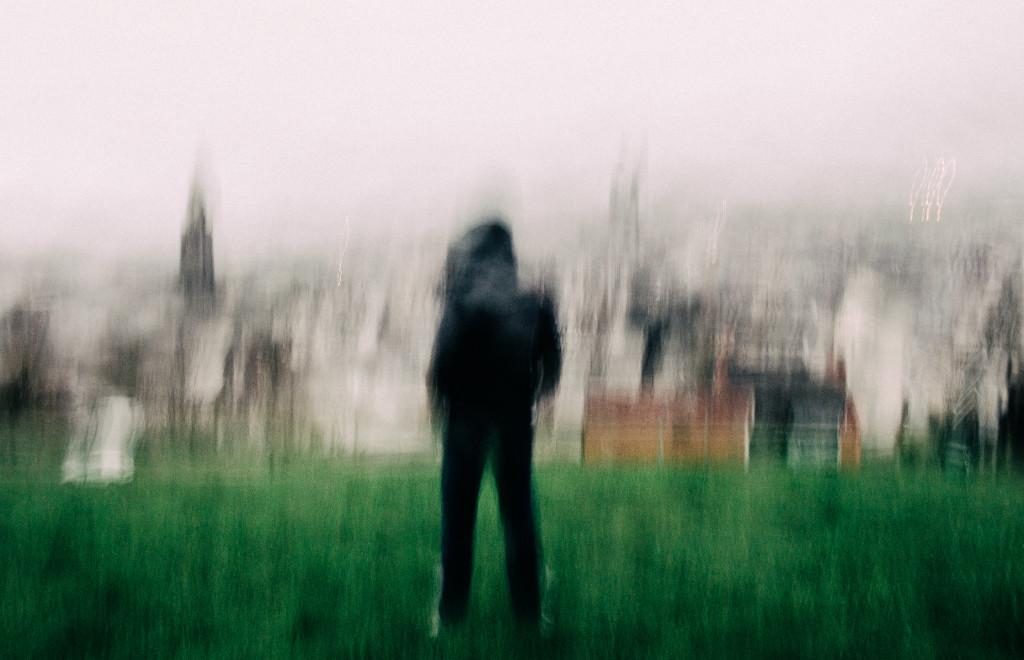 The numbers are staggering.

I learned on Wednesday evening that Apple’s #ShotoniPhone6 campaign won first prize at the Cannes Lions (Oscars for advertising) for their advertising company – Media Arts Lab . When presenting the award the Creative Director of DDB Worldwide, John Bailey, described the campaign as a game changer. It appears that once again Apple are ahead of the field and their idea to showcase the iPhone photographs of their users will probably result in competitors trying to emulate this.

Apple selected a total of 162 photographs from the millions of images shot on iPhone 6, scouring through the online photo sharing platforms of Flickr, Instagram and Facebook. The task in narrowing these down to 162 is mind boggling. The resulting pool of selected images were chosen to showcase the quality of the iPhone’s camera. Well-known photographers like Austin Mann and Paul Octavius were approached to submit images, but most photographers were, like me, unknowns.

In their approach, it was not made clear until the launch how the images would be used. Apple’s plan was to create the world’s largest mobile photography exhibition ever staged. (Has there actually been a larger photography exhibition?) On billboards and posters in all major world cities shot on iPhone 6 images began to appear; huge, dramatic photographs dominating urban landscapes. These locations were hand-picked for each image. The campaign, still in progress, is a rolling one. Shots have rotated from location to location in the four months it has been running. The estimation is that the images have been seen 6.5 billion times. Let that figure sink in. 6.5 billion times. What is the earth’s population?

The scale of this is enormous. To be involved in this campaign has been the experience of a lifetime for me. To think a photograph I created in a park in Copenhagen on a cold and dull day in October 2014 with a then-new iPhone 6 would go from my camera roll to colossal billboards in cities all over the world is mind-blowing. To think that from the 162 images mine would be one of five to win individual awards – a Golden Lion – is just so incredible.

All of this is still going on. I am still receiving emails and tweets from people I have never met sending me images of the shot from different locations or in print magazines. It is pretty surreal and I feel I won’t be able to fully process it and appreciate it until it has passed. Take last Tuesday morning. When I woke up and turned on my phone I had this notification from Bangalore, India: 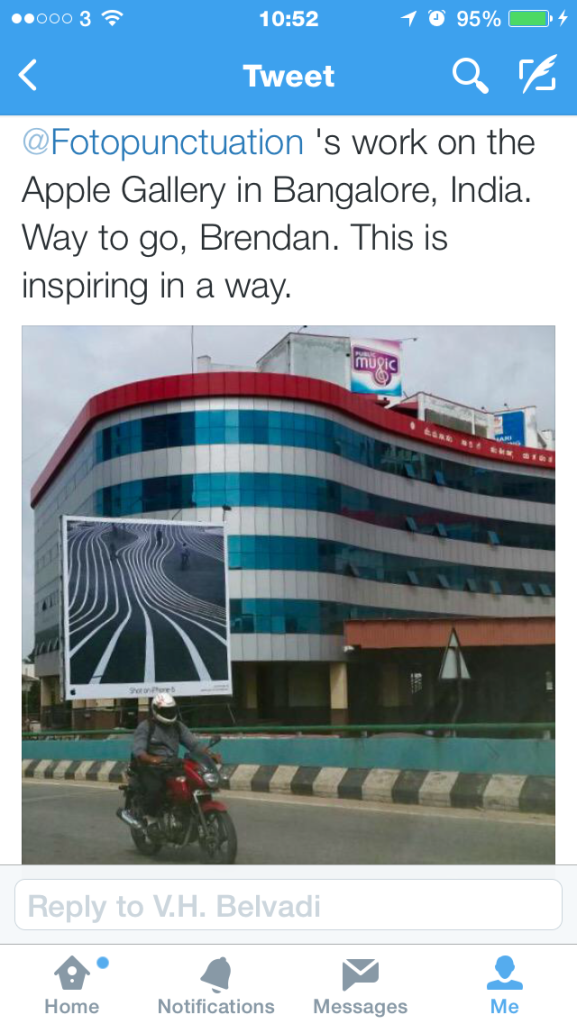 Of the photographs people have sent me of the image on billboards, this is, I feel is one of the very best. V.H created a really artistic shot. But the thing is – how absolutely crazy it is to receive a notification like this. Something I created is being seen by people on the other side of the world and they search me out to send it to me. There is something beautiful about it, something that will stay with me for the rest of my life. I do realise how fortunate I am to be part of all this and I am grateful to Thomas Toft who brought me to that park in Copenhagen and to Apple for giving me the opportunity to showcase my work and make me love the iPhone even more.

IT was a great honour to win ‘Best in Show’ at the Florence International Photography Awards with my iPhone photograph of Shibuya Night. Here is a little background piece I wrote about getting that shot on iPhone image.

It was still lashing rain when I got out of the taxi in Shibuya. The driver left me in front of the entrance to my hotel. A little up ahead from me, people were heading for the last late-night trains home in a procession of umbrellas crossing that famous zebra-striped pedestrian crossing. The neon lights were rushing colourful reflections on the black and white street. A countdown had begun. In a short few hours, four to be exact, I would be leaving Tokyo. What to do: Head to the hotel room or stay out in the rain looking for that one last photo? I looked at the hotel entrance and saw the dimmed lights of the lobby and then looked at the scramble crossing – resplendent in the rain – and without hesitation headed there.

With my transparent, plastic umbrella held over me in one hand, my iPhone in the other and my Nikon swinging from my neck, I waited at the crossing for the green man t0 appear. At this late hour there were many fewer than the average 2000 people who cross at peak time during the day. I had been shooting through the plastic of the wet umbrella with the iPhone all day. I liked the bokeh it created and the somewhat surreal gloss it gave to the images, but as I waited for the green man to signal I had been looking at that man opposite me, that man who had been peering down at me for the past few days. That man with his hand open at his face and his fingers curved over his eye staring at me, and below him was this cackle of late-night hawkers handing out flyers for bars and clubs. I knew my frame.

The green man popped up and I moved with the others as we began to cross. I stopped about halfway to get some shots. There is about a two minute window to get across when the green man is up. A long time in photography. The green man began to flash and in an instant I was the last man standing in the centre of the crossing. Still, I stayed there in the centre. I did a slow pirouette, taking in the vast scape of all that is the Shibuya Scramble Crossing. The air was fresh. The only sound I heard was the rain water as it splished and splashed under my shoes and I was saying to myself: All of this will just be a memory tomorrow, but I am here now; here now.

The squelch of tyres on the wet of the street alerted me to the oncoming traffic. Eyeballing the taxis I weaved my way to the safety of the other side of the crossing.

There in front of me, sheltering under plastic white umbrellas, were the late-night hawkers, shuffling about and handing out their flyers to those they perceived were the demographic the bars or clubs were trying to attract. Glances were thrown at me and clearly I did not fit that demographic.

Left alone, I began to frame the shot. There, among all the guys was this one girl, dressed in high heels and a mini skirt; her head bowed, engrossed in her phone. And above her, to the left this man overseeing it all. Click! I got it. 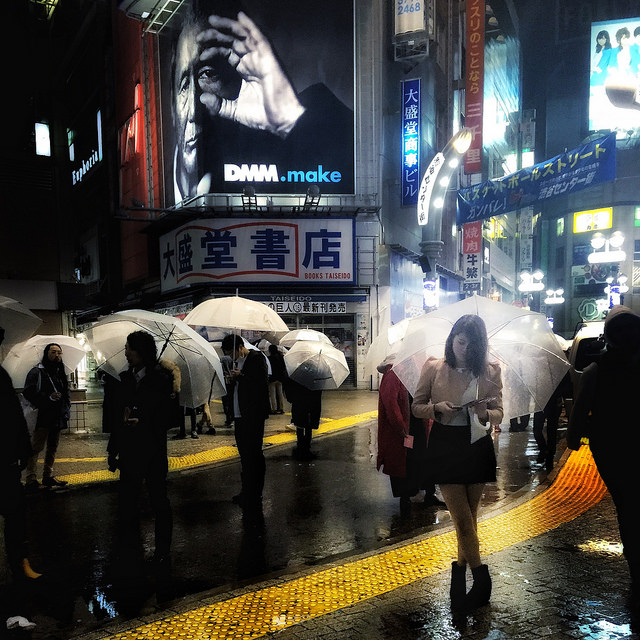 The countdown clock still tick-tocked my time away in Tokyo. The rain would not stop and I was getting tired. Things run their course and time in Tokyo was coming to an end. I waited for the green man to replace the red man and I crossed the Shibuya Scramble Crossing for the last time, leaving the neon of Shibuya for the low-lit lamps of the hotel.

The next day, sat on a plane heading home, I reviewed my images on my phone. This one I stopped on. Using the new version of Snapseed, I did a little editing. A few days later, I posted it to Instagram and then later to Flickr. It hit Explore, got more than a thousand faves. Then I entered it in the Florence International Photography Awards and to my great surprise it won ‘Best in Show’.

So glad the dimmed lobby lights of the hotel were no match to the rain-drenched Shibuya Scramble Crossing at night.

The adventure of photography.

Time is passing so quickly and I am realizing I have not been posting to Flickr with any regularity. The days of posting two shots every day seem so far gone, but I have just been too busy lately. My plan is to get back into serious Flickring from next month. I have photographs from Milan, Amsterdam, Tokyo, London and Porto to share.

This week I will try to post more from Porto. I had a fabulous time and am almost finished my blog post about my experience there. For today, I am posting two images: One with the Fuji taken in the back alleys of Riberia. This labyrinth-like cluster of lanes and alleyways is a wonderful place to explore. Looking up you will find old ladies resting on the railings of their balconies, while below them their freshly-washed laundry dries in the sliver of sunshine that finds its ways down these narrow lanes. 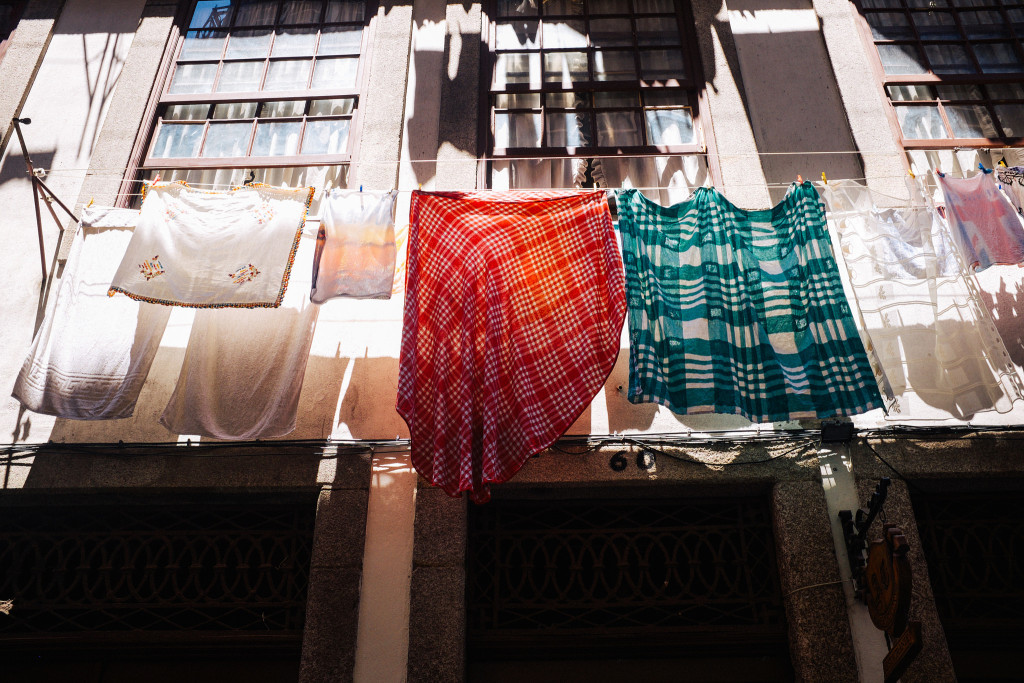 I found myself using the iPhone much more while in Porto. There is something so perfect about this camera for me. You cannot be in Porto and not notice the love of colour the locals have. 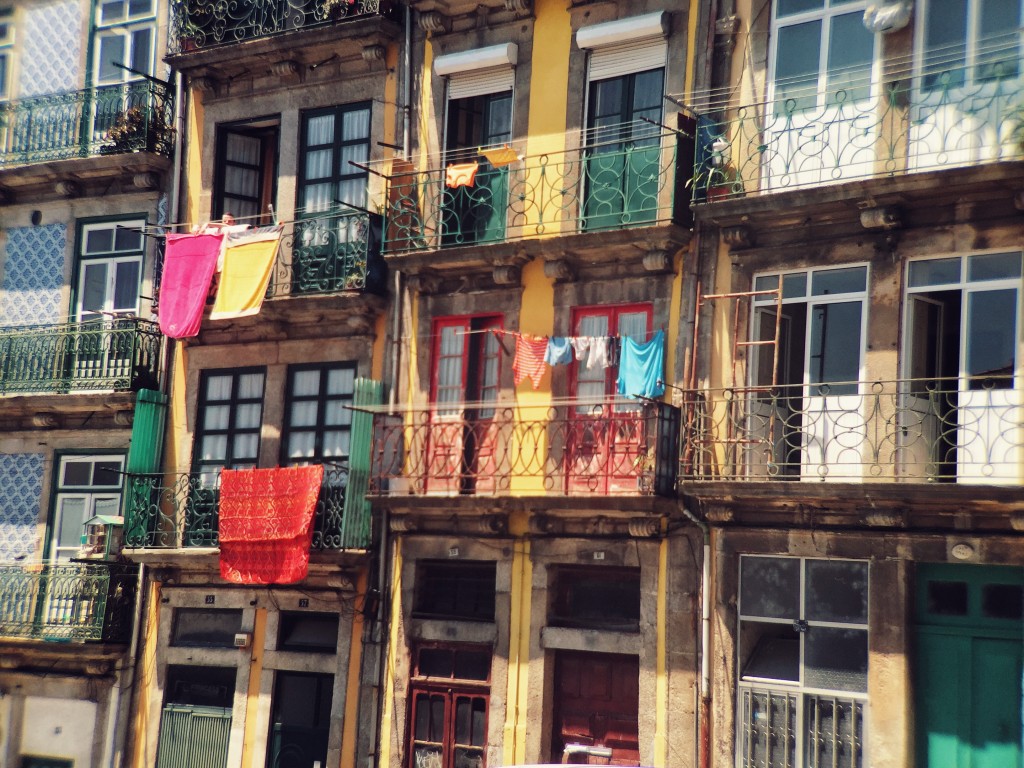