What a weekend of hurling. 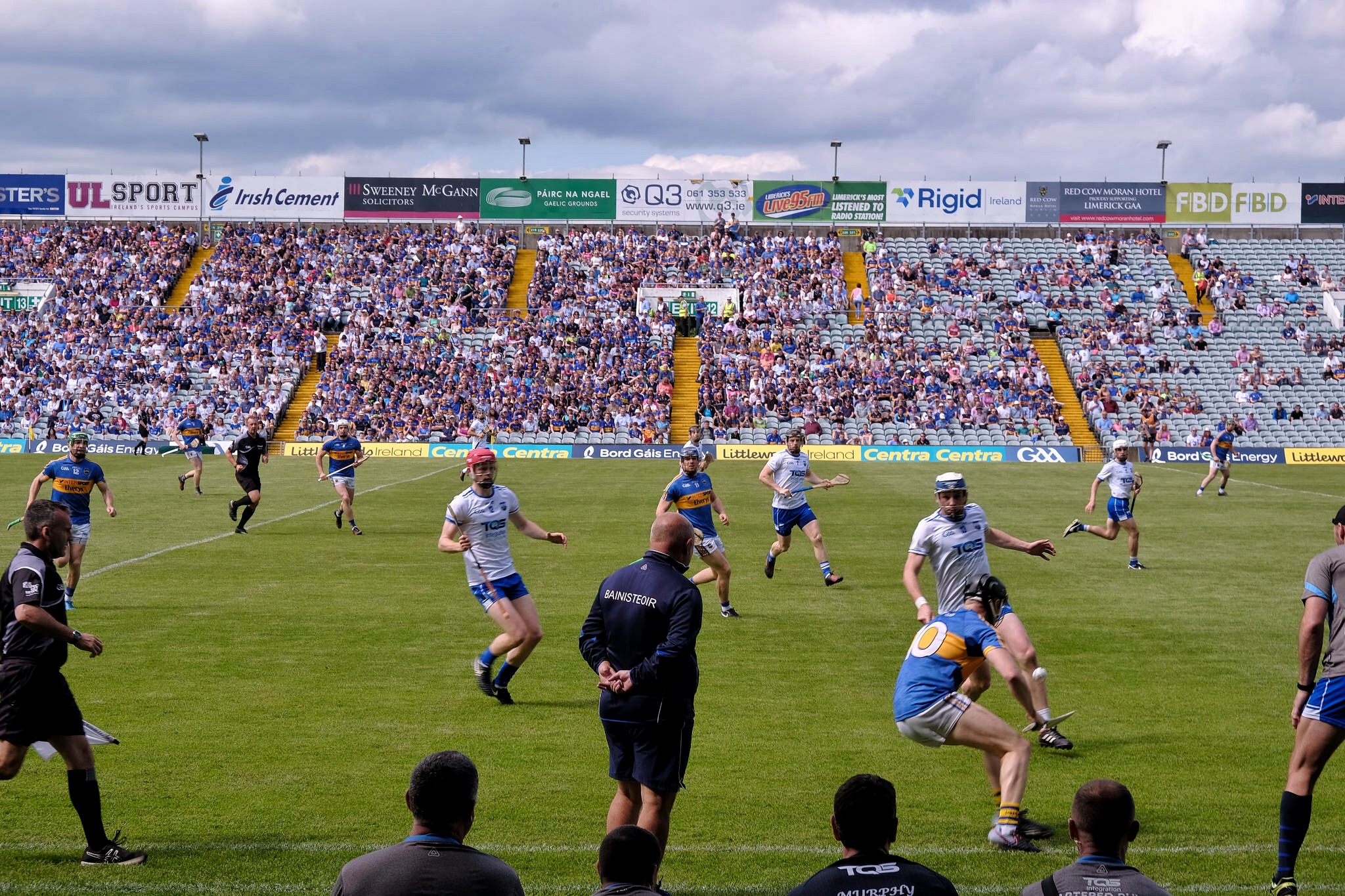 After Saturday night’s thrilling encounter between Cork and Limerick, I was treated to another game that will live long in the memory in Limerick. Tipp looked like they had forgotten what made them a formidable side as Waterford drove through them in a one-sided first half. 2 goals to the good at 35 minutes and Tipp a man down, things were looking good for this makeshift Waterford side. The Tipp bench seemed out of ideas as they subbed their big name players and fell 11 points behind a buzzing Waterford team in the second half. With 13 minutes to go they were 9 behind. 5 minutes later they were 1 behind and the game had swing incredibly in their favour. Even more incredible were the refereeing decisions that went against Tipp. The umpire who was right next to Austin Gleeson as he fielded a high ball on the goalline somehow saw fit not to argue his case against the umpire on the opposite side who raised the green flag for a goal. No Tipp player called for the goal. Gleeson had not caught or carried the ball over the line. The referee consulted one umpire, not the one who had best sight of it. The goal stood. Tipp were back in it. A few minutes later Tipp shot for a point. The umpire waved it wide. The referee overruled him. Games, championships, careers turn on decisions like this. This game did. Waterford’s championship might. Derek McGrath’s Waterford career may well do so too.

As with many GAA matches, a draw was salvaged with a pointed free. Waterford have every right to feel aggrieved. Credit to Derek McGrath that he did not complain post match about the ref’s decisions. They deserved more from the game. Tipp, for their part, need to play from the get go. They look flat. They look vulnerable. Clare will come to Thurles smelling blood. Waterford played some lovely skillful hurling, but tired at the end. They face a strong Limerick side next Sunday in their third game in 15 days. It’s a tough ask for these young players to raise their game again. But maybe next week will be Waterford’s turn for some good luck in this thrilling Munster championship. 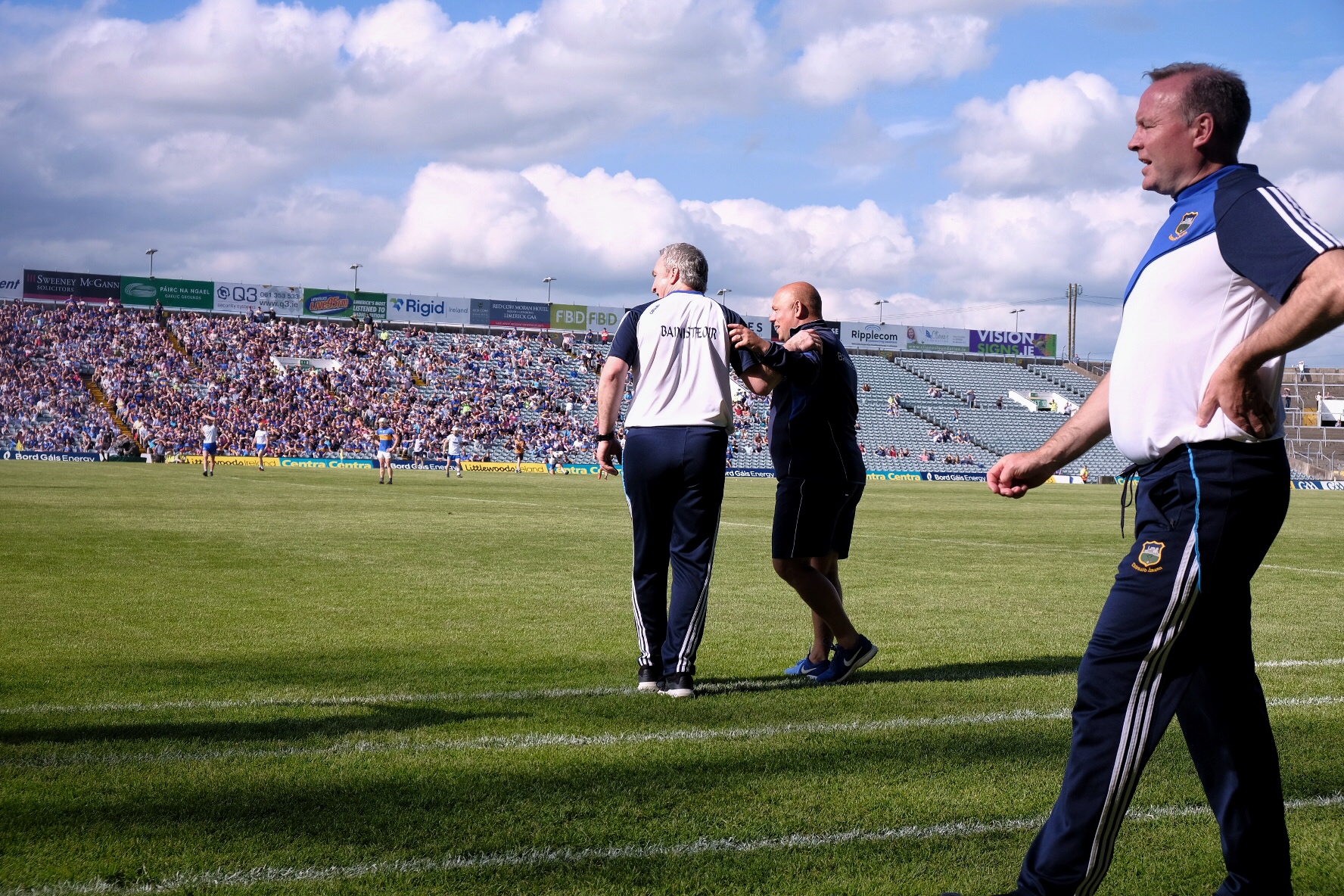 This was my first time in the Gaelic Grounds for a few years. I got the train up from Cork, changed at Limerick Junction and was surprised at how few match fans were on the train to Limerick. Leaving the station I was unsure of how to get to the stadium. I stopped one of the few fans I saw, Frank McCann, recognisably a Waterford fan with his blue wooly hat. Establishing we were both heading in the same direction I began to tell him of my project. “Ah, the Cork match was great last year. My girlfriend is from Cork, so it was even better.” Did ye both go? We did, but were in different parts of the stadium. So, no arguments then? Ya, but there was a long journey back to Cork in the car later on with her brothers. It was great!” 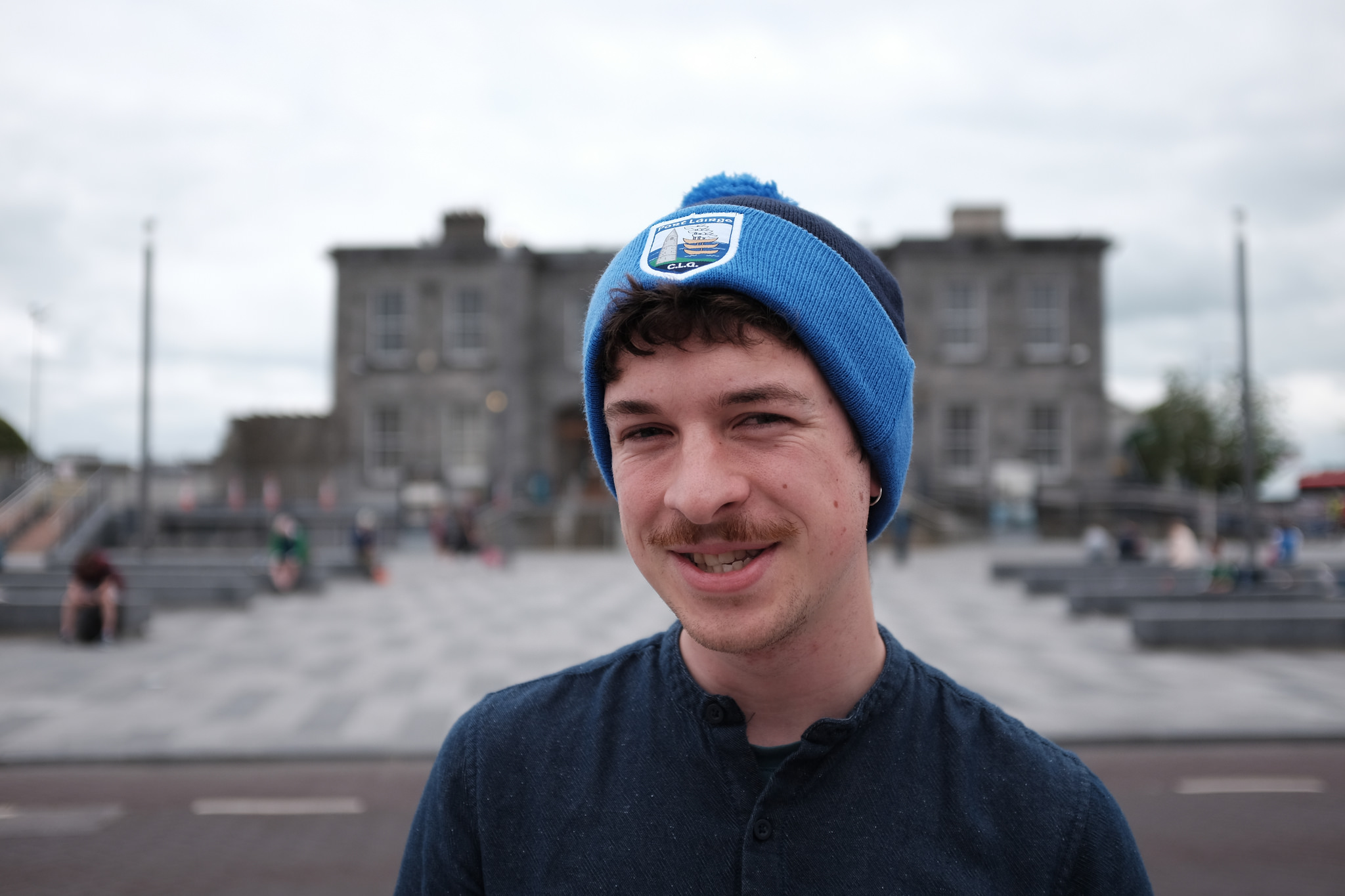 After a long walk from the station I found both sets of supporters were gathered outside Woodfield House on the Ennis Road.  The first people I got speaking to were three Waterford supporters but not one of them were from Waterford. Kevin McNair and Lorraine Dollard from Tullamore had brought their Greek friend Eva Angeli to her first hurling match yesterday.“What do I know about hurling? It’s aggressive. It’s fast. And Waterford will win!” said a confident Eva. “We want to expose her to Irish culture and hurling is the best of Irish culture. Just look around here. Everyone together, having the craic and then the game. She loves it!” said Kevin. Being a language teacher, I had to teach Eva some useful phrases for the game and in return she taught me a Greek one: Pame Waterford, but I will have change that to Pame Cork! Come on, Cork! 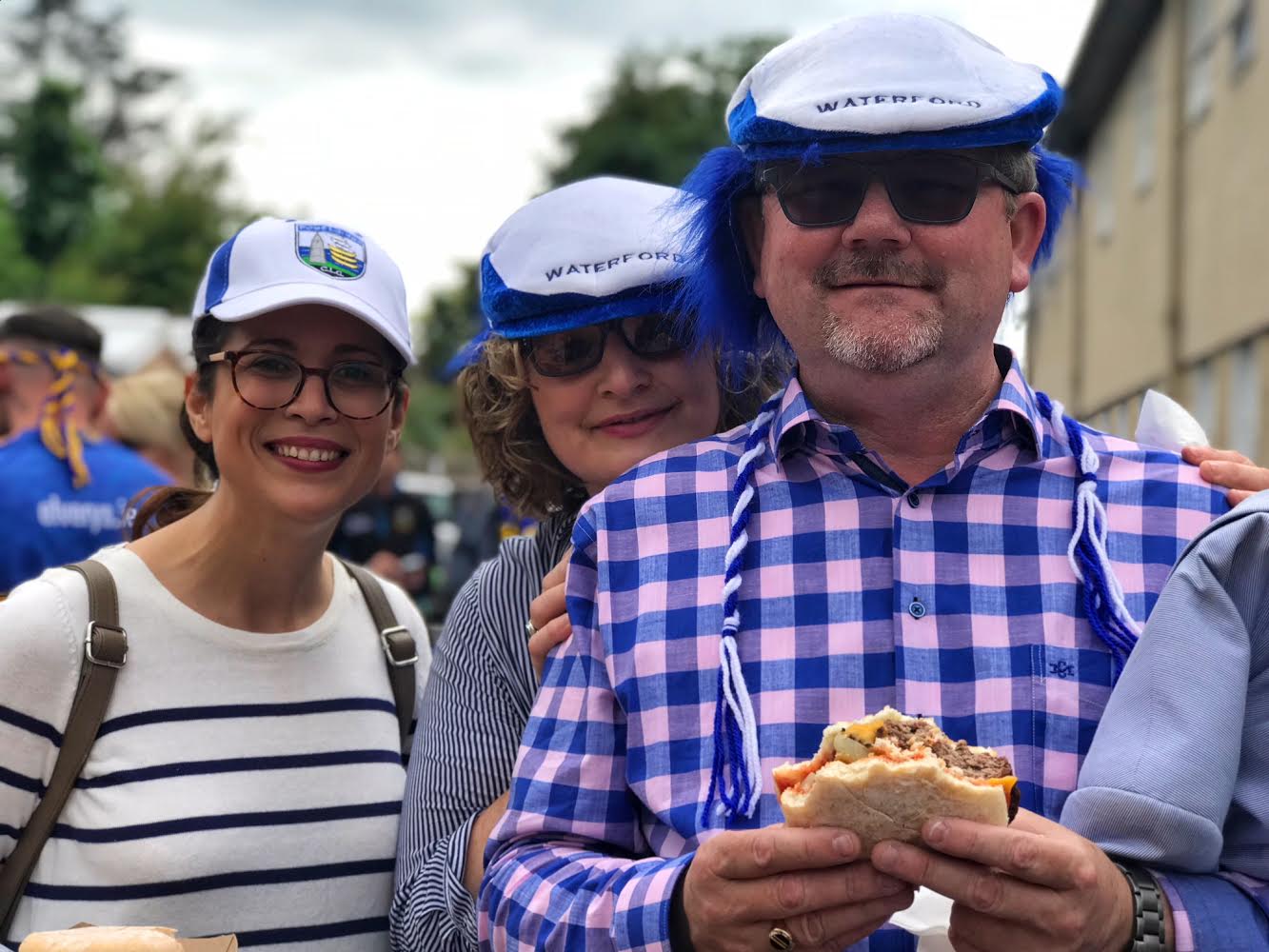 Just behind them was a large and loud group of Tipp fans, enjoying a few drinks before the game. They welcomed me into their company and, in fairness to them, they were patient as I tried to get a shot of their colours. “Take a photo of our flag. We have a flag for our son, Eric. He died by suicide.” Eric’s father told me. I could not help but feel sorry for them, but at the same time I had admiration and respect that they would remember their son and brother in this lovely way. 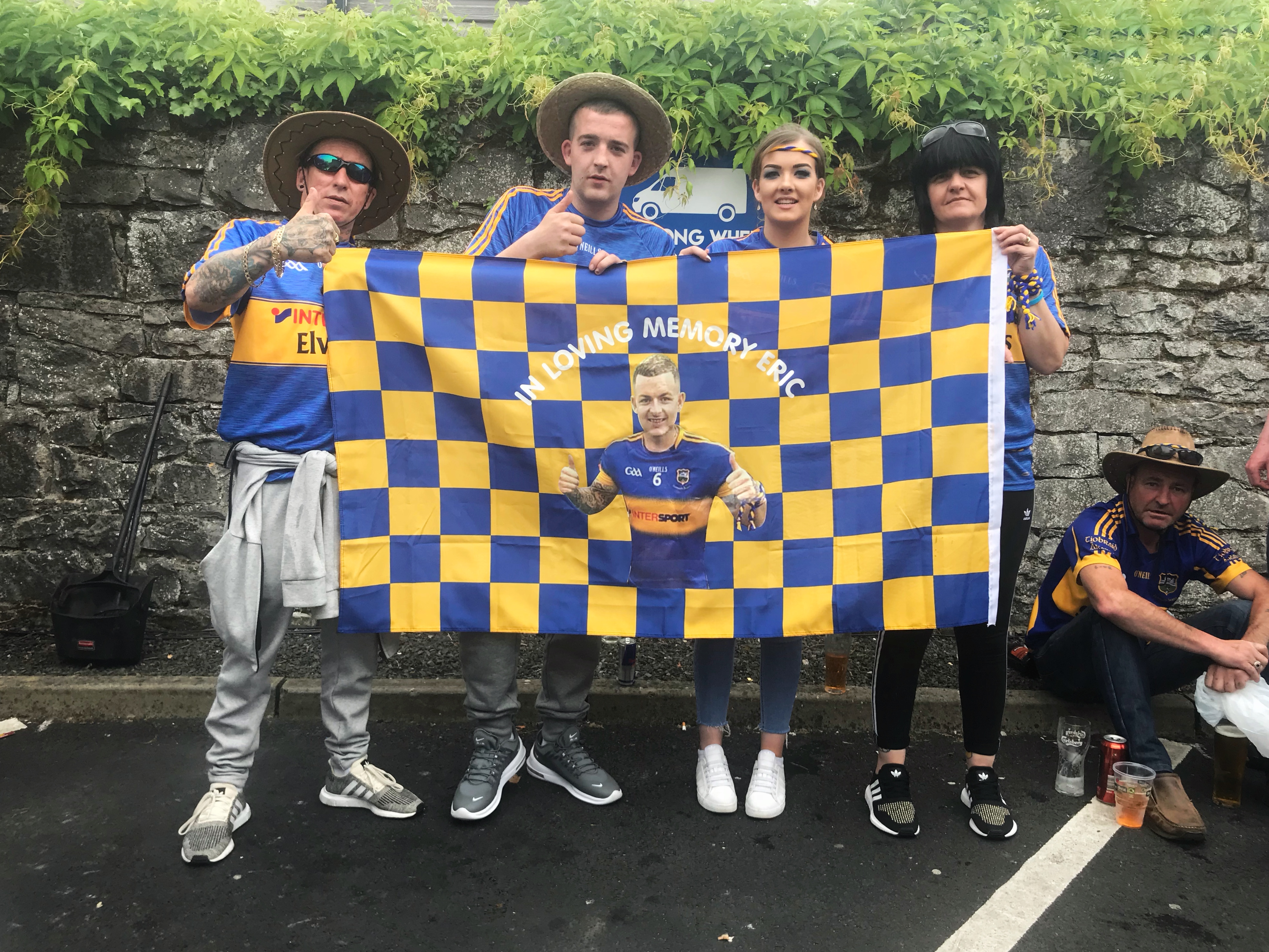 The Smith family from Tipperary honouring their son and brother Eric 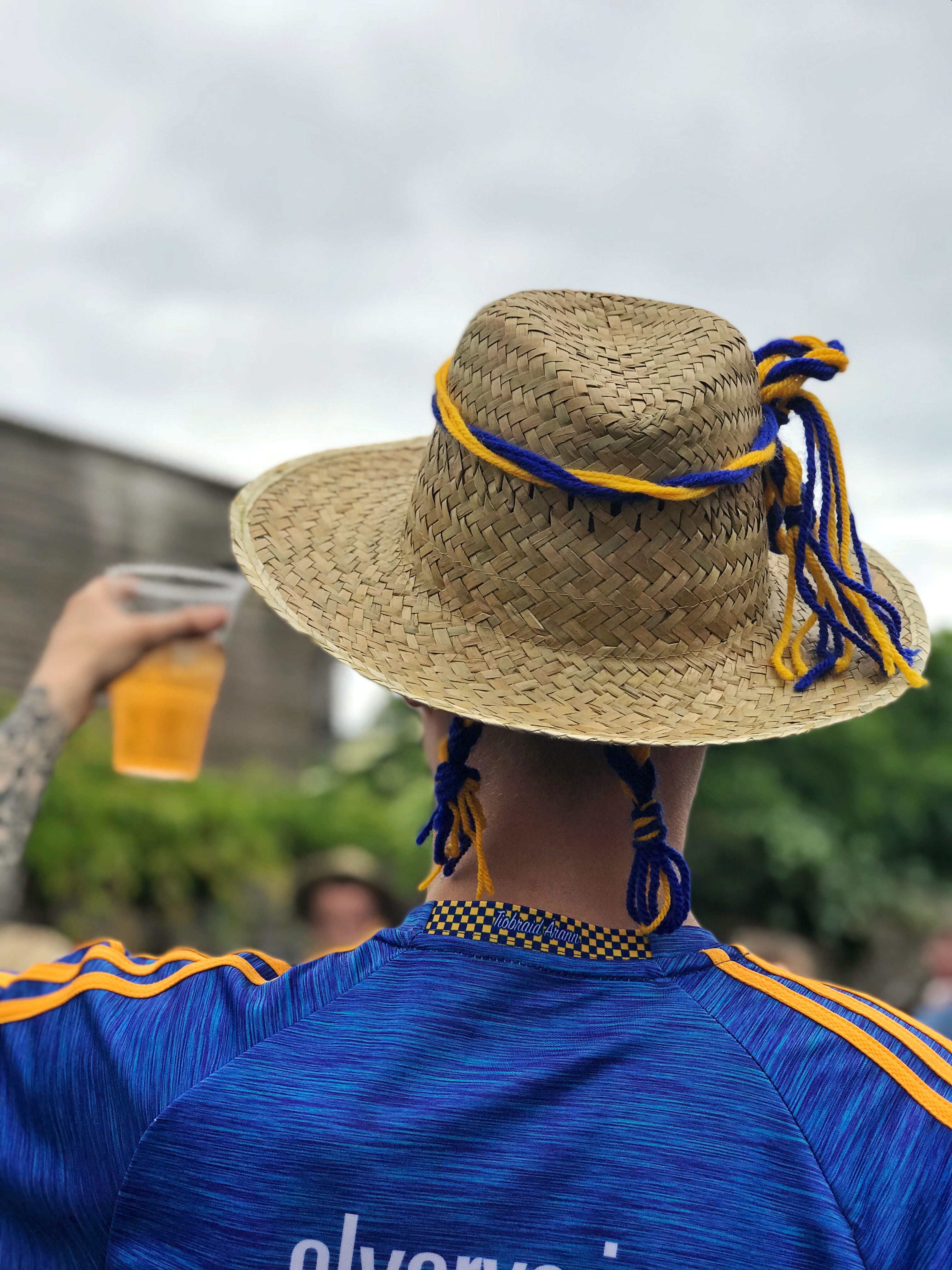 Just across from the Smiths was the Phelan family. Mrs. Phelan told me: “We would go to the games when my two children here were kids. In those days we might only get one day out in the year, so we had to make the most of it. We’d bring a picnic and stop along the way. It was great to have the whole family together. It’s different these days with the backdoor and this round robin, but it’s still all of us together going to games.” 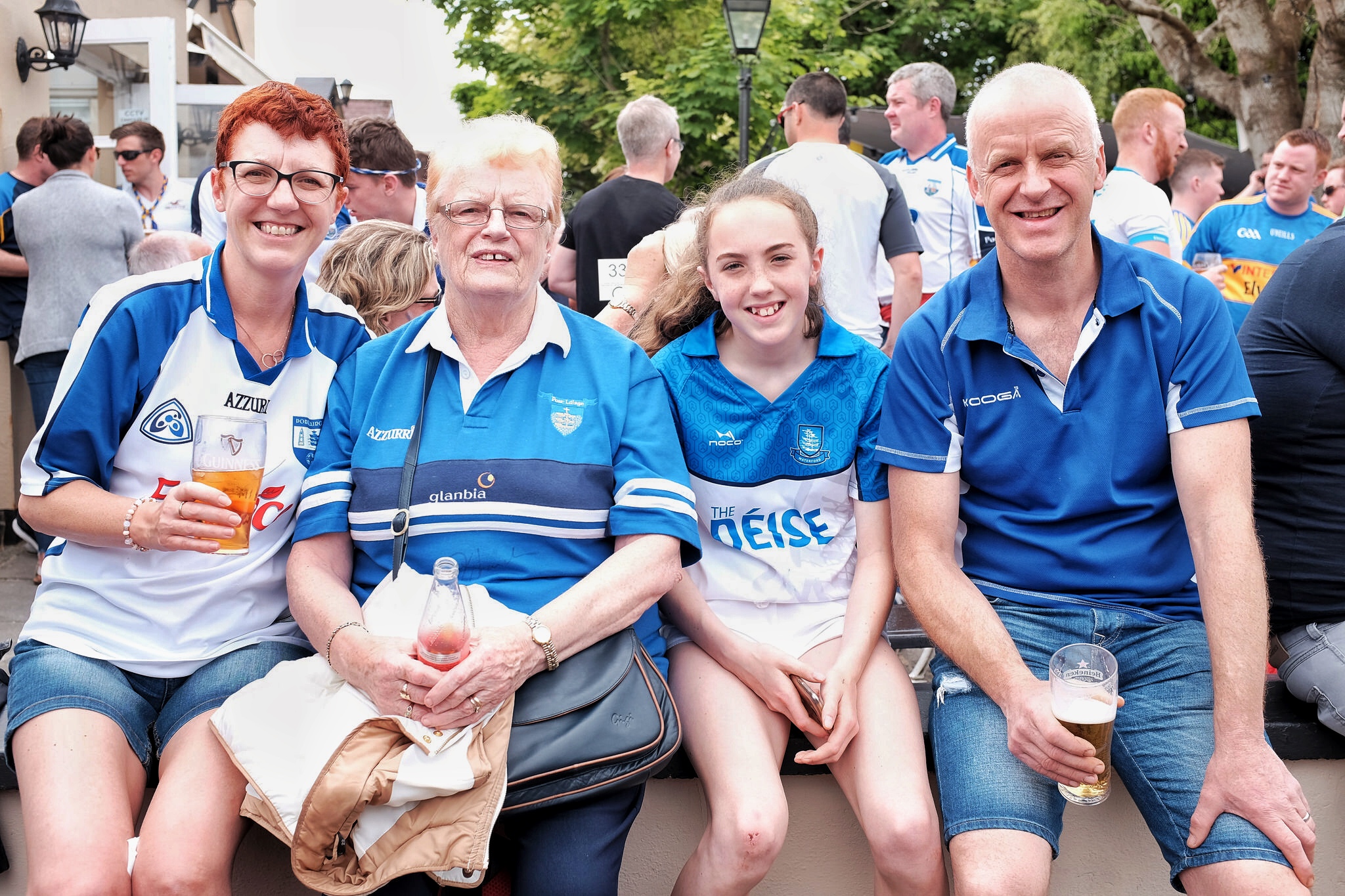 “I’ve been bringing my niece, Patricia, since the 70s.”“Patricia, she’s my only niece.” Mick Duggan told me. “You’re going to games for years, what does it mean to you? I asked. “Oh, hurling is everything. Winters are long. We have to wait for the summer. “When we win, of course I celebrate. The homecoming in Thurles. Nothing like it.” Patricia told me it was her turn how to bring him to the games. Mick looked at his niece and said: Come on, will ya. I don’t want to be missing the parade. 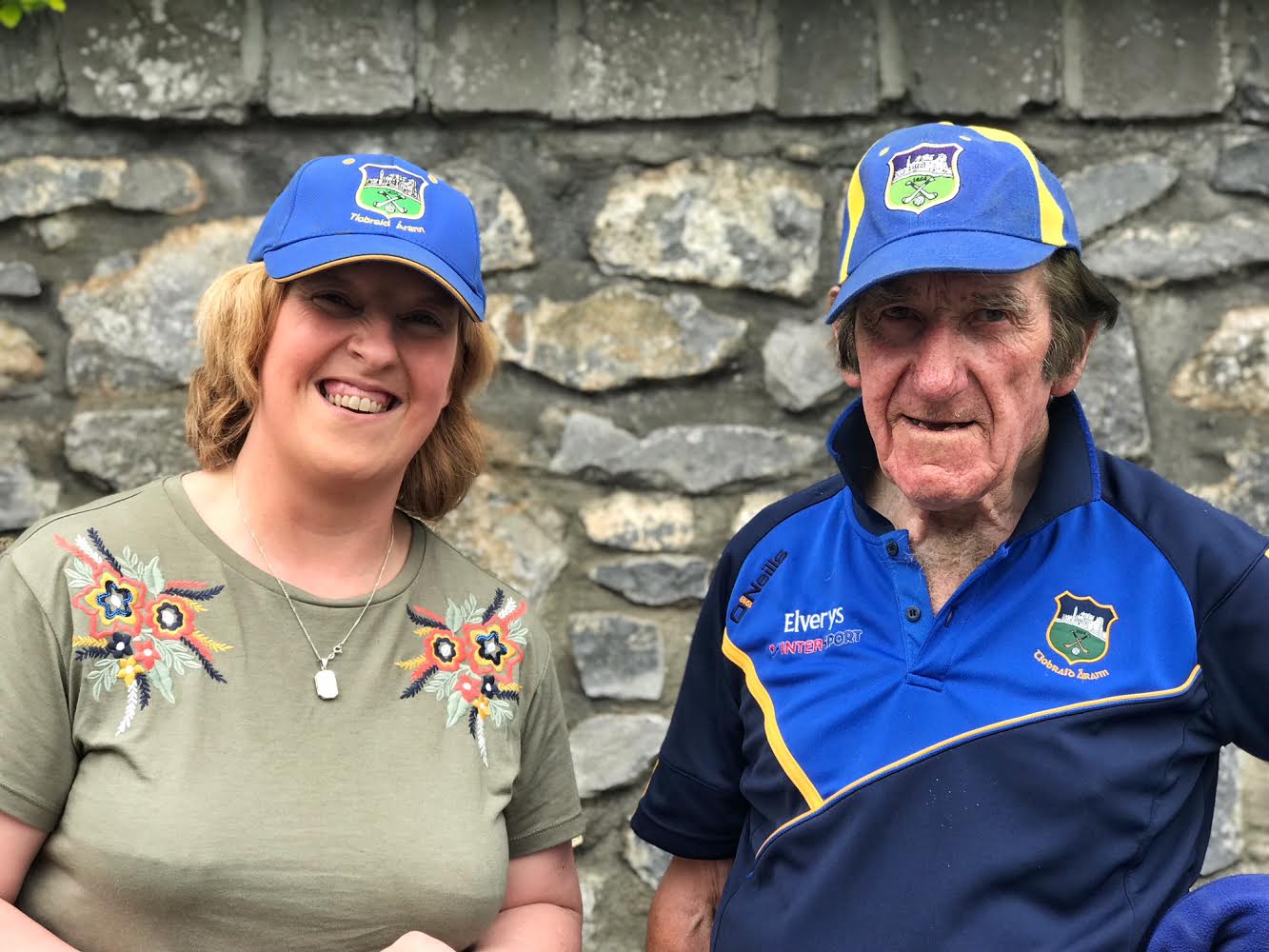 With all the people who go to the games it is unusual to bump into the same people two weeks running, but that’s what happened when I ran into Tipp fans John and Robert Gunnell. I had seen them at half-time in the Cork Tipp match the previous week. “You were right!” John said. “You said it wasn’t over, and it wasn’t.” Unfortunately, I was right. Cork were not able to repeat their first half performance against Tipp the previous Sunday. I love how John and Robert Gunnell bring their hurleys to the match for a puck around before the game.

“He’s not my husband. He’s my match-day partner. My husband is at home.” Does he mind? I asked. Not at all. Does it take ye long to get ready? It takes me a few minutes, but Margot takes much longer,”  Sid told me.

Next up for me is a trip up to Nolan Park on Saturday to see Wexford, the only team I’ve yet to see, play Kilkenny. The winner will qualify to meet Galway in the Leinster Final on June 30. I am still not sure of what game I will go to on Sunday; back to Limerick to see them take on Waterford or to Thurles to see Clare play Tipp. Which should I go to?