I had not thought you could transfer a photography workshop to an online setting, but the two online mobile photography workshops I did back in April in support of the ISPCC were such a huge success, raising over €5k for the charity, that in conjunction with the Gallery of Photography in Dublin, we are now planning a workshop for June 29th and July 4th.

Coming from an education background, I am very aware of the need to allow students put into practice what they are learning. These two 90-minute workshops are structured so that in the first week, I will walk you through how to get the most from your smartphone camera. Then in a series of easy exercises I will heighten your visual awareness equipping you to create more dynamic and creative compositions in your photography, all the time relating it back to your own personal style of photography.

We then have a week until the second of the workshops. In this time you have the opportunity to put into practice what you are learning. I will give you guidelines – according to your own photographic style –  of different types of photographs you can get and during the week we will connect and I will provide personalised and individual feedback on the photographs you create, helping you to further sharpen your photographic eye and create images to be proud of.

Jump forward to the second workshop and now the focus will be on editing your photographs to put your personal stamp on your images. I will show you how to use Snapseed (a free editing app) to make your images visually dynamic and captivating to the eye. I will continue to guide you and provide constructive criticism. There will then be the opportunity to share our photographs with the like-minded photography enthusiasts on the workshop.

By the end of the two sessions, you will have photos to be proud of and you will be seeing and thinking more photographically and have developed your own personal style and leave the sessions with a passion and excitement for photography.

Looking forward to seeing you online for a great mobile photography workshop!

To book your place on the course, click here.

We will Zoom for the delivery of the workshops. You can download it here.

All course materials will be delivered to participants electronically.

Can I take your photo?

“Can I take your photo?”

It’s not something I find easy to ask. Take this situation I found myself in last Tuesday morning while waiting for a bus in Cork’s city centre. It was about 10 a.m. Town was quiet. There were a few people heading to work, some early-morning shoppers, delivery people doing their jobs, and then this striking character sitting on an electric fuse box outside a shoe shop. Wow! 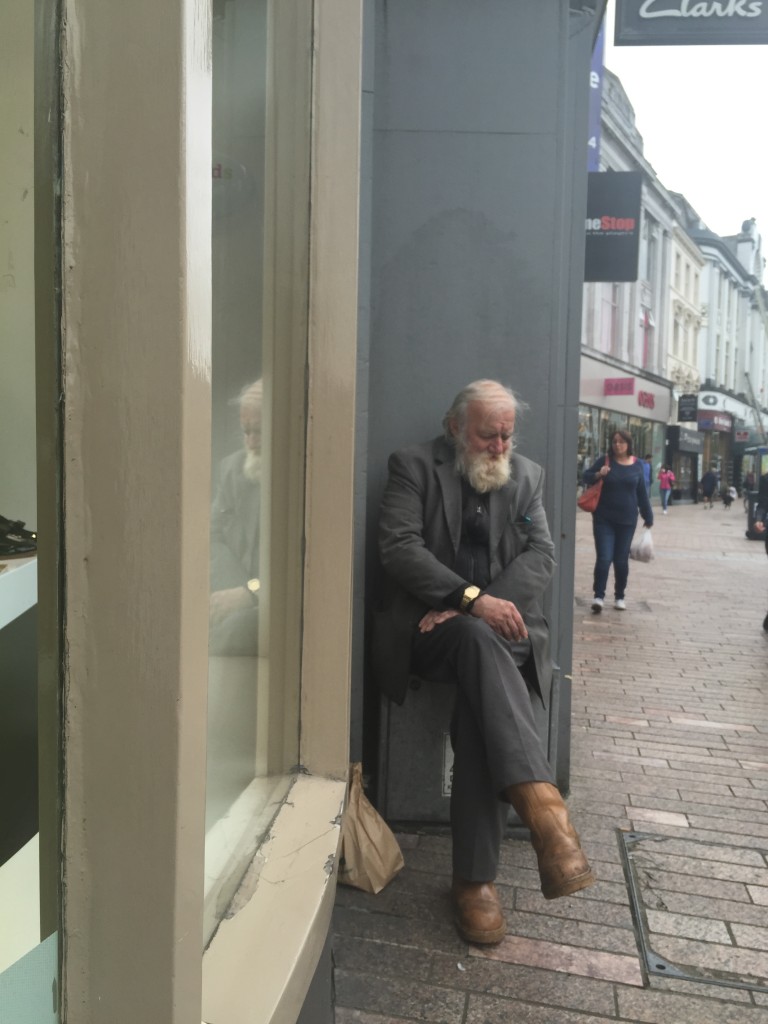 Looking at it now, I am annoyed with myself. How did I miss the reflection? Usually, I am more aware than this. Another great opportunity lost. Anyway, this striking looking man was sitting; killing time. I was struggling. Should I ask him straight to take his portrait or be discreet and get a candid image? Hesitating, I furtively shot a few frames of him. I pretended to be looking in the shop window. I got a little braver and got another one or two of him, but all the while I just wanted to turn and tell the man that I found him fascinating and wanted to create a portrait of him. Street photography is difficult and, for me, even more difficult in my hometown. Put me outside Cork and I am much braver. Ya, I will rarely stop and ask someone for their portrait, but I will get down on my knees in front of them and shoot a frame or two. Nothing bad ever happens. But in Cork… I don’t know. 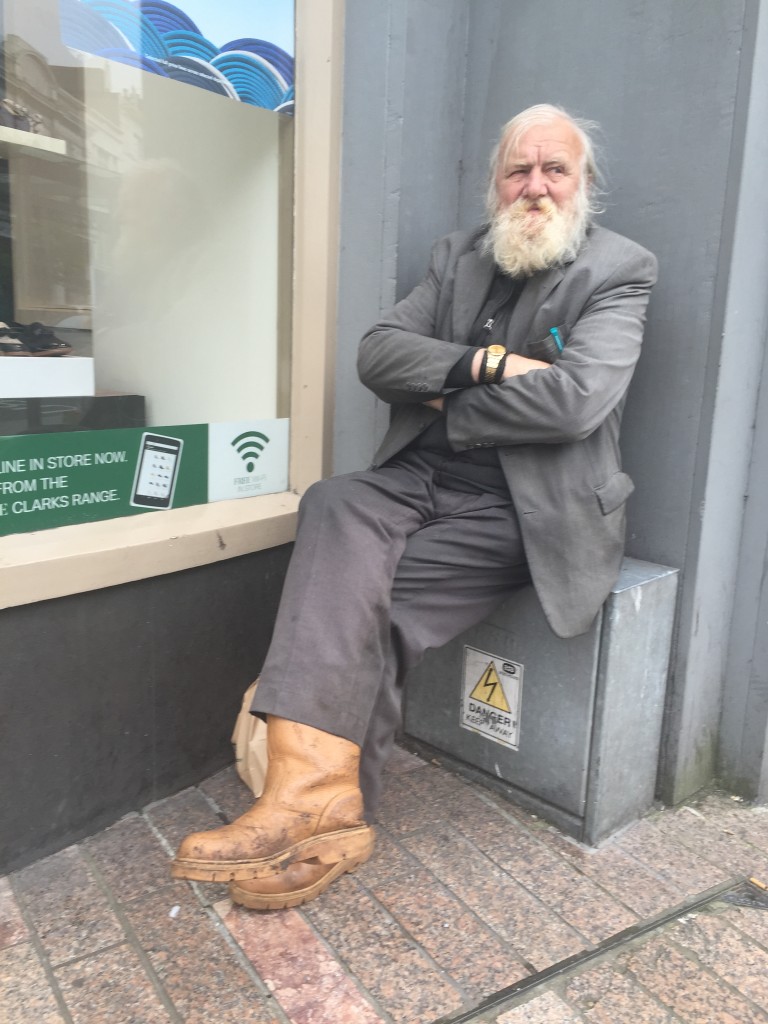 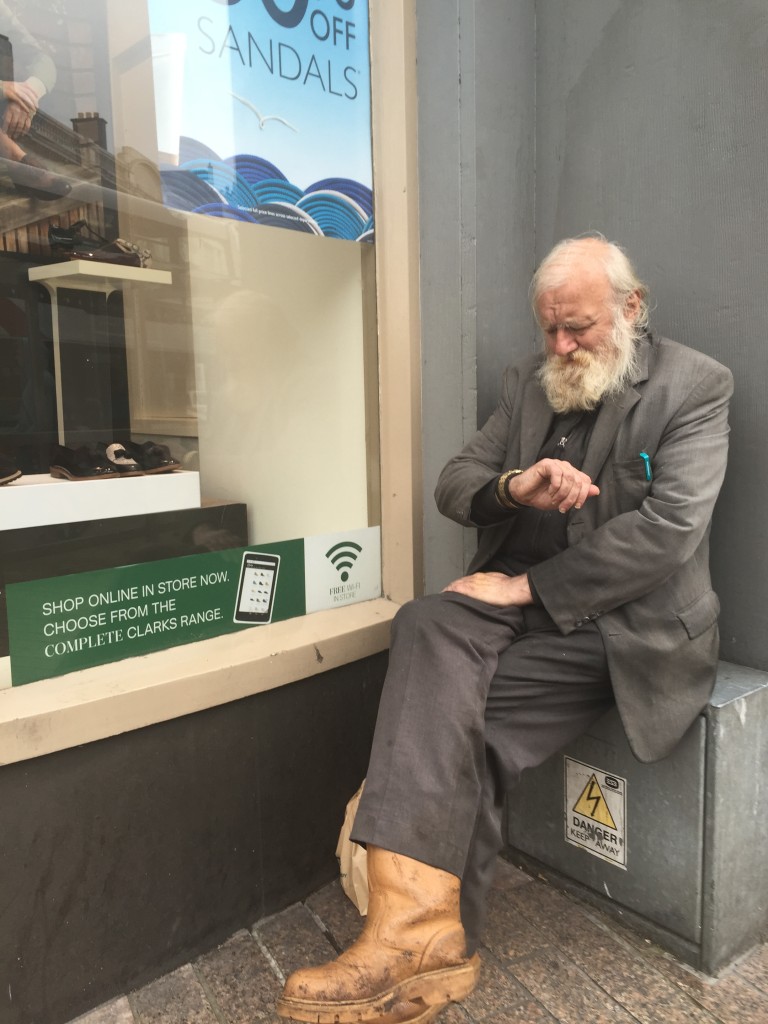 It was this shot, with him looking at his gold watch which got me. There he was, this man with a beard, grown over years, clothes aged and worn to their last and a gold watch that would not lie to him. I had the shot I wanted, but still I felt a need to connect with him; to thank him maybe, but in the short time I was there with him, we never once made eye contact; I never felt him aware of me. And then my bus came and the moment was gone.

On the bus, I began to kill time with my favourite pastime – processing images. I began to work on the shot above using Darkroom. I am growing more and more fond of that app. I have the alpha version of the yet-to-be-released version and it is great. What I love about it is that you do not need to import anything; when you open it all your photographs are there. The alpha version has some beautiful preset filters. If you have not tried it -rush to the app store. Your photos will love you for it. I ran the shot through it and this is conversion. 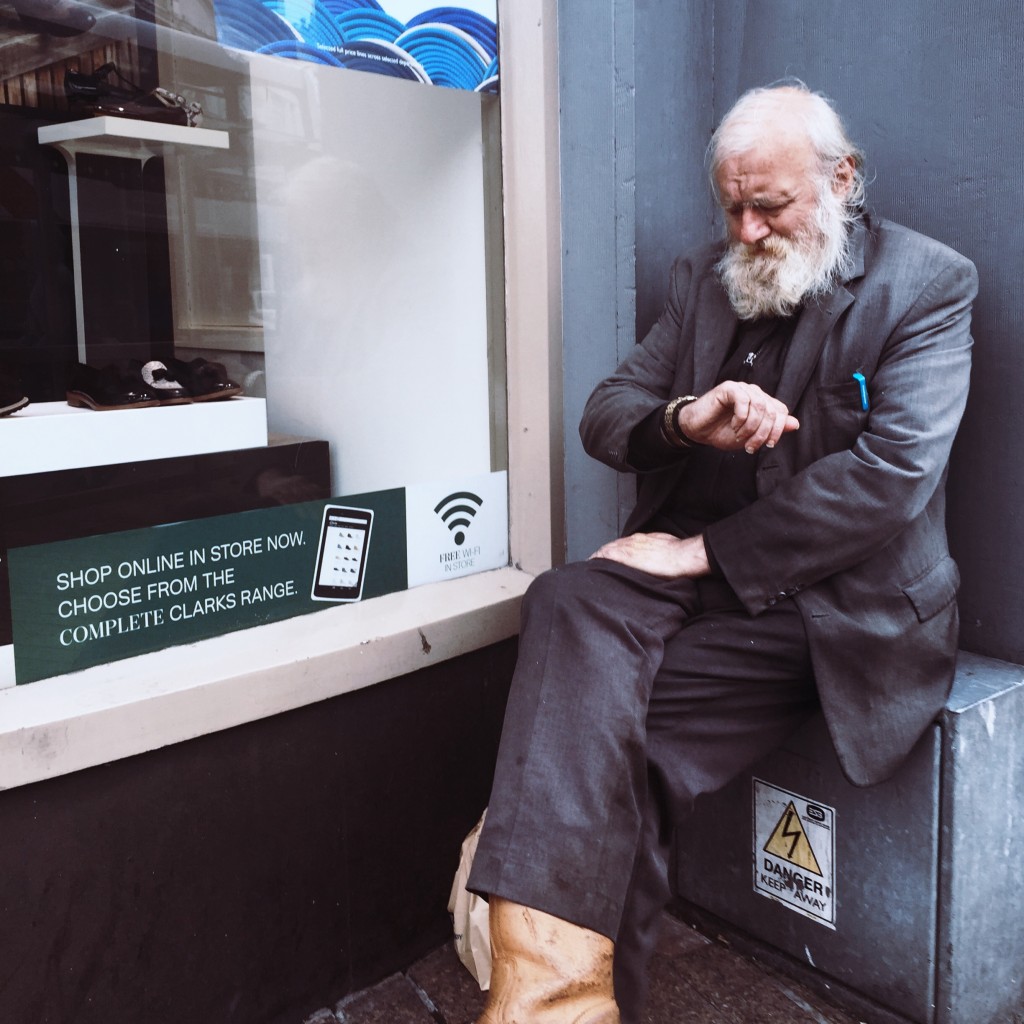 I cropped it to square to get rid of the distracting surrounds, did a little work on the contrasts, a little on curves (ya, it has curves) and this is the result. But I was not happy with the left side of the image – thinking it detracted from the main focus of the man. iPhone photography is great. Solutions are easily found. Snapseed has a great tool – brushes. I knew that I could isolate my character with the exposure brush – that and the vignette tool. Working on it on a moving bus is not the best idea, though. I worked a little on it, but finished it when I arrived at my mother’s house. While it is OK, I still want to do more on it. Things are never perfect. 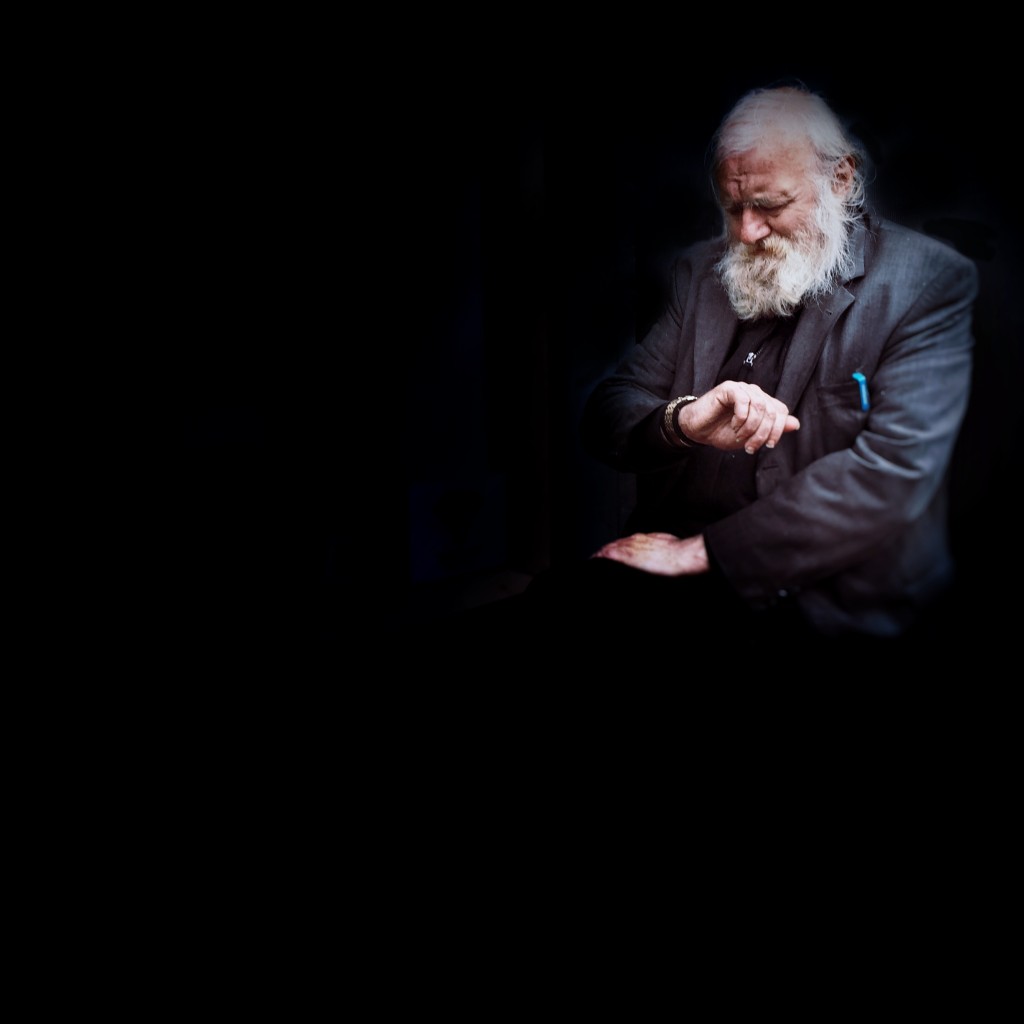 I will revisit this image. The crop needs to be readjusted. There is too much negative space at the bottom of the image and the execution around the edges should be finessed more. A little project to work on. I rarely spend a long time on post processing. Usually my edits are rapid. Two to five minutes max. But this one, I will persevere with. Let me know what you think in the comments below.

I really would have loved to have asked him if I could take his portrait. I would love to find him again. Learn a little about him. Thank him.

February saw the first appearance of the bokeh heads. Writing this now, I remember that it all came about as an accident. The best things in life often do. But the bokeh heads will feature in the end-of-year review, but not in February. For this month’s image I have chosen a shot I took in Tokyo the previous year, but processed using Snapseed in February of this year. I had been using Snapseed on the iPhone and really enjoying it before curiosity got the better of me and made me search for a desktop version. Throughout the year I would run quite a few images through it, particularly using the grunge  feature. This is evident in today’s image, one taken in the subway in Tokyo. The severed upper bodies of salarymen are visible as they make their way to work. I gave it the title Drudgery. 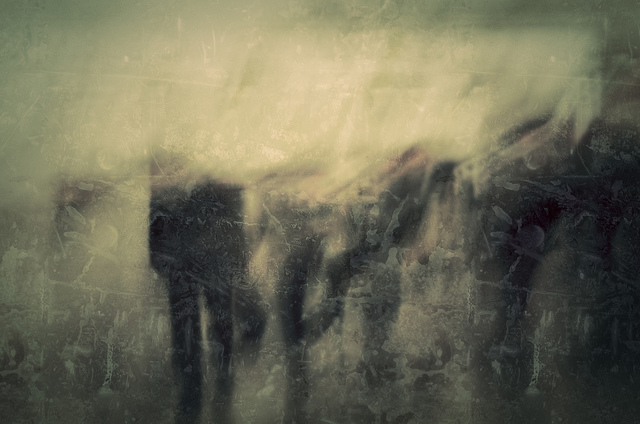