The sun came out in the second half of this match. It really could not have missed out on it. It was a cracker. As the clock ran down and got closer to the end of the three minutes added on, Cork found themselves in the same position they had been 6 days previously against Tipp: one point ahead and time almost up. Again, they could not hold on and with one of the last pucks of the game, Limerick’s Kyle Haye split the posts to split the points for both teams. The game was exhilarating. The lead changed hands several times throughout. 14-man Limerick, to their credit, brought the game to Cork in the second half and for much of that half they did look like they were going to do it. They had gone in 1 man down and 2 points down at half-time. 10 minutes into the second half they went behind to a Pat Horgan goal, but replied with 2 fine points almost immediately. From there they kicked on and heading into the last ten minutes Limerick held a 3-point advantage. Points from Horgan, Fitzgibbon and Lehane edged Cork into a 1-point lead at the death, but justifiably Limerick got the equaliser and took a point from the game.

Seamus Harnedy finding it hard to break through the Limerick defence

Five games in for my project and this was the most enjoyable game. The atmosphere was electric. 34,607 paid in for the game. Limerick people travelled in droves and were brilliant craic. The banter, the colours, the fans mixing together on a warm June evening.

Having the match on a Saturday evening lends itself to a great atmosphere. Cork was buzzing yesterday. Cork Harbour Festival was taking place in the city and drew big crowds. Add into the mix the colour the Cork and Limericks fans bring and it makes for a great spectacle.

Limerick fans on the way to the game

Some people dream of wearing the blood and bandage of Cork when they are kids. For Kevin McMahon it was “a bit of a nightmare.” Kevin was down in Cork for his stag and his buddies, Trevor McInerney and Dylan Rees thought “it would be good craic to dress him up in a Cork jersey and a camogie skirt; to show off his fine legs.” Kevin is getting married to “a Limerick lass” on July 5th. “I hope you be wearing this then, I said. “Will ya eff off! he said. 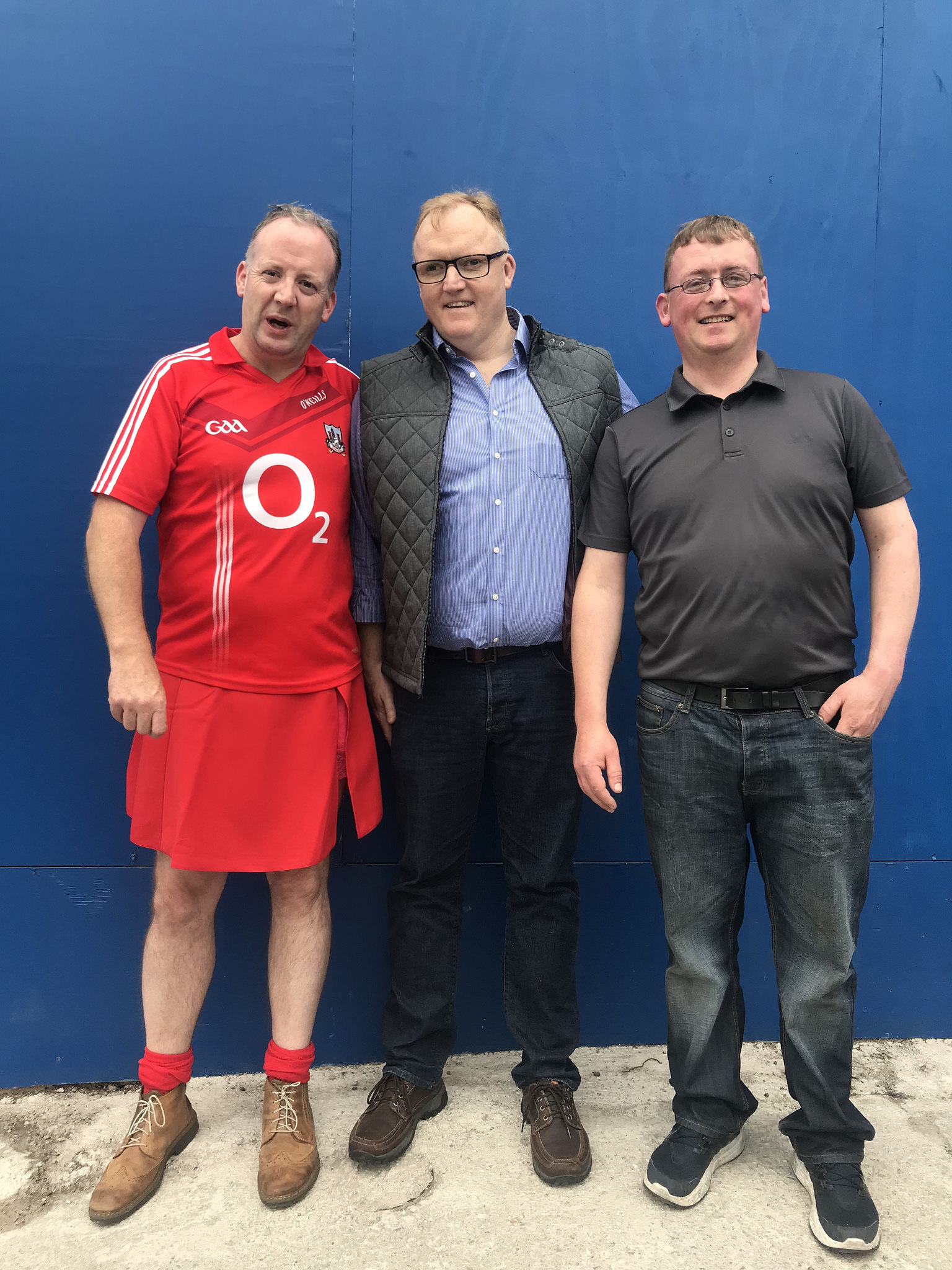 “Show’s what’s under the dress, I asked. Coyly, Kevin lifted his skirt to show a lovely pair of frillies. Fair play, Kevin. Thanks for being such a good sport.

David Dooley was standing outside the pub with a long face when I saw him. “Why you looking so sad? I asked. “My buddies left me. I got stopped in a bar up the road for over 23s, I’m only 22. I had to come down here on my own.” “You’re missing out on the craic with them? I said. “Ya, but they said they’ll be here in a while.” True to their word they turned up later and by the look of them they were having great craic before the game.

David Dooley and his friends who came back for him

Walking past The Idle Hour pub down by docks in Cork, I could not help noticing the exuberance of these five lads. Banging the bodhrán, singing songs and having a few pints together before the match. “We’re Corcaigh on Tour, Donnacha Seeward said. “You can find us on Facebook. We go to all the matches.”  Donnacha introduced me to his friends Shane Healy, Craig Murphy, Gavin O’ Donovan and their honourary Corkman, from Poland, Michal Koziol. It was great to chat with Donnacha and his buddies and see the fun they were having before the game. I loved the fact that they brought their Polish friend along to the game.

Speaking to Michal, I asked him what it was about hurling that attracted him. “I started to go to the games with the lads and I love it all. The game is so exciting, so fast.” What about the craic before it, I asked, would you get that in Poland? “No, he said, not at football matches, maybe volleyball. Ireland is special. It is brilliant with all the fans together.”

“How ye getting back to Limerick tonight? Driving. After pints? I asked. No, no. My brother is driving us. He’s down at the game already. We’re having the pints.

“I said to myself: What am I doing supporting Kerry? I’m a Corkman! Liam Long told me he was 14 years old before he “copped on to himself.” He used to go to the games down the old Athletic Grounds with his father, who was a Kerry man. “It brought me long years of suffering though, he said. “I know all about that and the Kerry footballers, I said. “The first match I went to with my father, Andrew told me, was the 1999 Munster Football final against Kerry. We won that one.” Ya, but we lost out on a double later in the year”, I said. “Ya, but we did win the hurling.” And we also beat Kilkenny. In the rain too. And they say we can’t play in the rain. said Liam.

Andrew and Liam enjoying a drink before the game

“Will I take off my top for you?, Aisling O’ Brien asked me. “Jesus, no! What kind of photographer do you think I am? “I mean my jacket, to show my Limerick jersey. Oh, God what have I said!” “You’re grand, you’re grand. Don’t worry. I know what you mean. Aisling and her friend, Eimear Fogarty were kind enough to stop for a photograph on their way to the game. The two friends love hurling and while they were supporting opposing sides, they were still out to enjoy the occasion.

In a couple of hours I am on the train to Limerick for the Waterford Tipperary match. This is a crucial match for both sides. Lose and it is almost certain your summer is over after the round robin series. Waterford have been unbelievably unlucky with injuries and withdrawals from their squad. I have a feeling, though, that they will bring the game to Tipp this afternoon. With Wexford losing to Galway in yesterday’s Leinster championship we now know that Galway will contest the final. The match between Kilkenny and Wexford next week will decide who faces them.