In this hurling season that just keeps on giving and giving, yesterday’s match may not have hit the heights of the two epic games of the previous weekend, but it did try to follow that script. Much like the drawn game between the two counties, Galway raced into a 9 point lead only to see their neighbours gradually claw it back. That is 3 games on the trot where Galway have led by 9, only to see the opposition pull back to within a point of them. But it must be acknowledged that even though they have left big leads slip, they have only been led once in those 3 encounters. When Johnny Glynn slapped the sliotar one-handed to the Clare net on 20 minutes it looked like Galway had learnt their lesson and would put the game to bed before the half-time whistle. Who could have predicted that they would not score again in the first half? Clare to their credit rallied and again like the match in Croke Park it was Shane O’ Donnell who stood up and led that Clare rally. The teams went in at half-time with 6 points in it. With the help of 2 fine goals from Shane O’ Donnell and Peter Duggan Clare made it a 1-point game by the 54th minute with the score at 1-14 to 2-9. The teams traded points over the next 13 minutes. 67 minutes into this replay and there was a point in it. Back in June, at the death of their match against Tipp, the width of the goalpost on the town end of Semple Stadium stood between them and an early championship exit when Tipps’ Jake Morris shot failed to hit the net, bounced off the upright and Clare went up the field and scored a goal of their own. With that momentum they went on to beat and eliminate Tipp and their season opened up for them.  Yesterday, on the opposite end Clare’s Aaron Shanagher had the Galway keeper beaten, but what looked like a simple tap in for him came off the upright and Galway cleared their lines. Had it gone to the left of the upright, Clare would have gone 2 points up with 3 minutes left in regulation time. An All-Ireland Final against neighbours Limerick beckoned. Instead, Galway won a sideline in the Clare half. The crowd settled as Joe Canning took his time over the ball. The Galway crowd rose and roared when he sailed the sliotar between the posts. Galway were now 2 points up and only 2 minutes were left to play. Games are won and lost on small margins. Clare got back to within a point of Galway, but that point was enough to see them through to the August 19th final against Limerick, and the chance to win back-to-back All-Irelands. 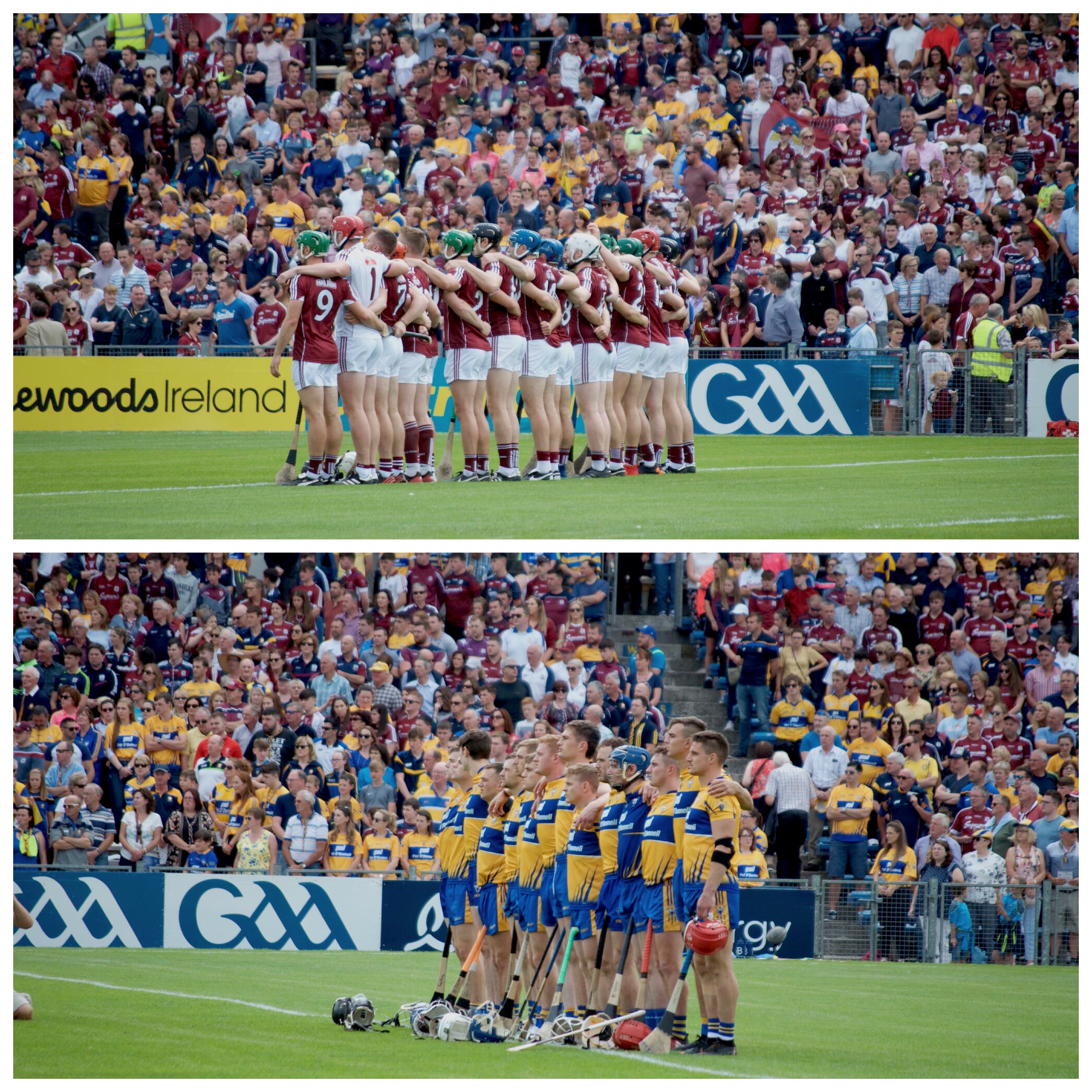 Clare shot 15 scores, but they also shot 19 wides, some really bad wides. Galway shot 13. Watching from the stand, I felt the 2 teams understandably found it hard to be at their best. The efforts of 90 plus minutes in Croke Park the previous weekend and the many games both sides have played this summer seemed to take their toll. In fact Galway’s scoreline of 1-17 would not have been a winning scoreline in any of the 23 championship games played except for the drawn Leinster Final between themselves and Kilkenny. It has been a long season. Both Limerick and Galway will play their 9th game of the championship season in the All-Ireland Final. Let’s hope they have time to recuperate and deliver us the match this championship season deserves. 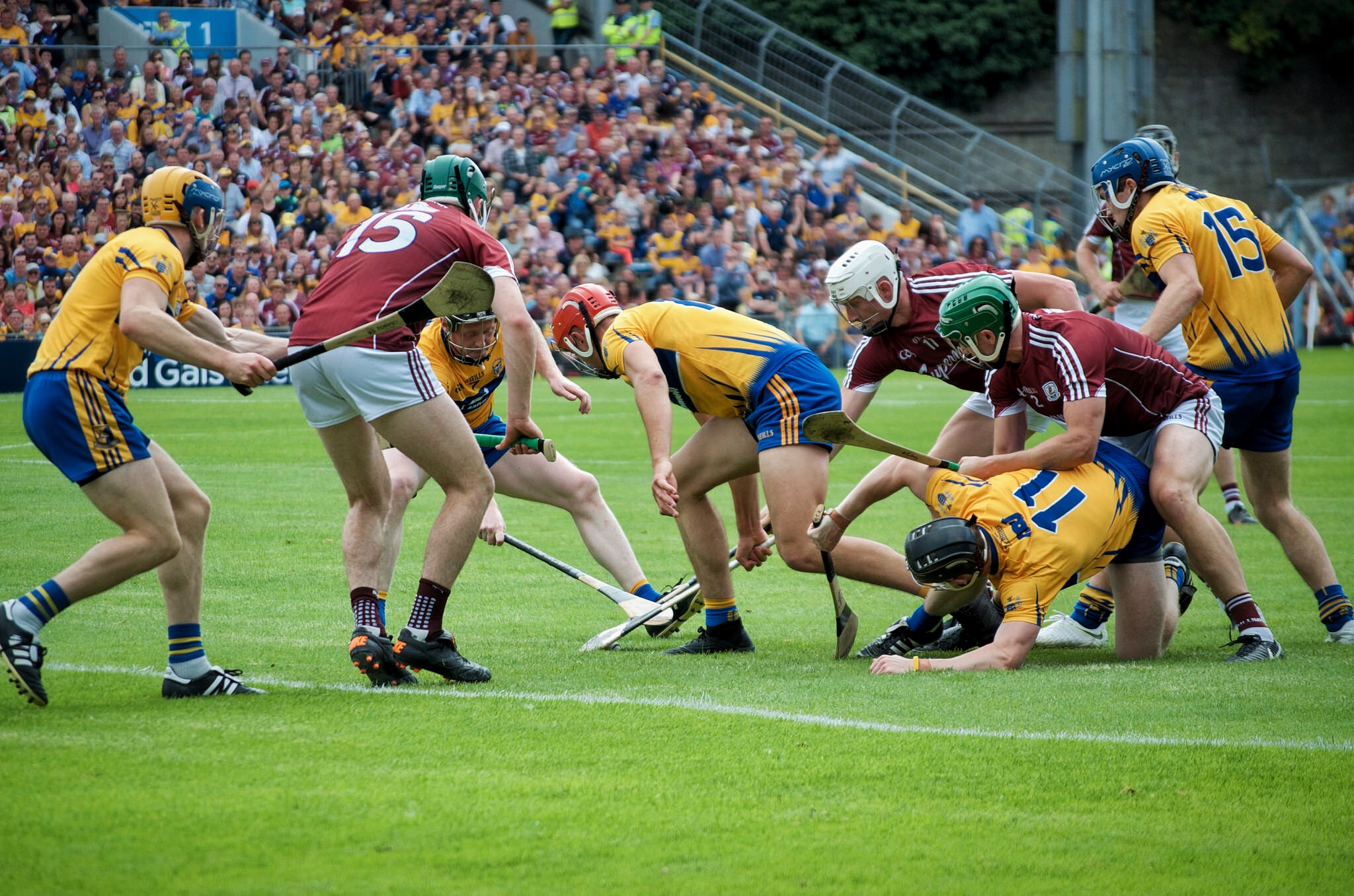 I find it hard to imagine regular day-to-day life going on in Thurles. Does it really? The town seems to be purposely designed for big match days. Walking into Thurles town square seeing the colours of the two teams playing on that day, hearing the banter being hurled back and forth from opposing supporters and sensing the anticipation of the untold theatre that is in store is something magical. Then when time has been calculated to arrive in time for the teams running out, the procession out of the square, up the hill over the railway bridge and the turn right for Semple Stadium begins. Then the real excitement starts. The stadium comes into sight. A roar from the crowd inside heralds a score in a minor match and the pace picks up. Through the barriers and you see it. Semple Stadium; Field of Legends. The queues of people making their way through the turnstiles. Tickets ready to be scanned. Little kids with their hurleys. Their fathers telling them to keep the sliotar in their hands now. The darkness of the turnstile and then the light. You’re in. You’re here. Thurles. Nothing like it. 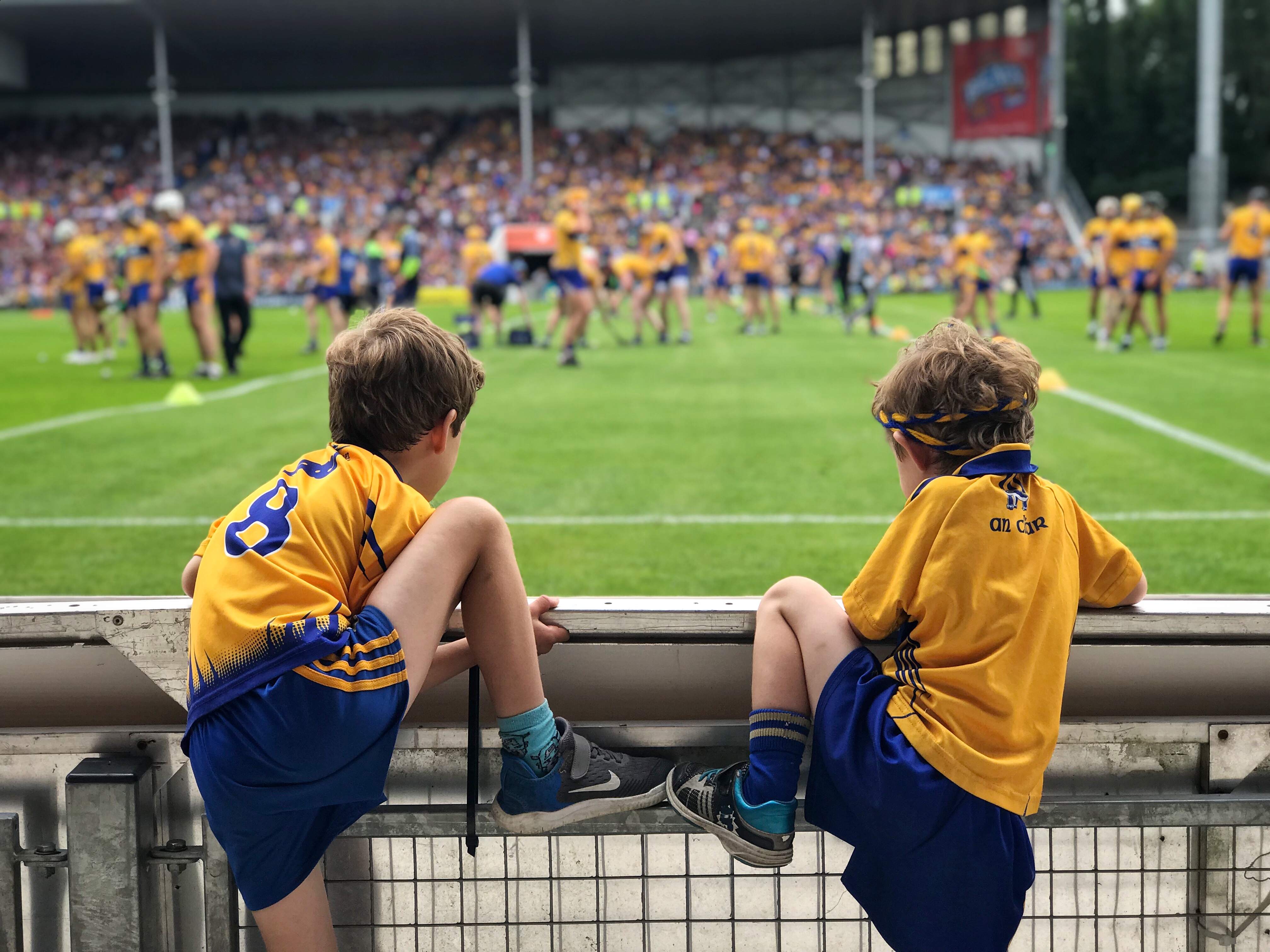 We’ll be out there soon

There are many GAA traditions. One I love is that in Semple Stadium they allow the fans on to the pitch after the game. I met Frank O’ Dowd on the pitch in Thurles after the final whistle.91 years old and still wants to get up off his seat at the end of the game and greet his heroes on the field. Frank never misses a match. Not just Galway hurlers – their footballers too. And minors. And club. And he loves horse racing. And he does it all with his family. His wife, Phil, could not be with him as she was in hospital in Dublin. His daughter, Áine, showed me a photo of her in her Galway jersey watching the game. The GAA should honour Frank and his wife Phil. They are everything good about our games. 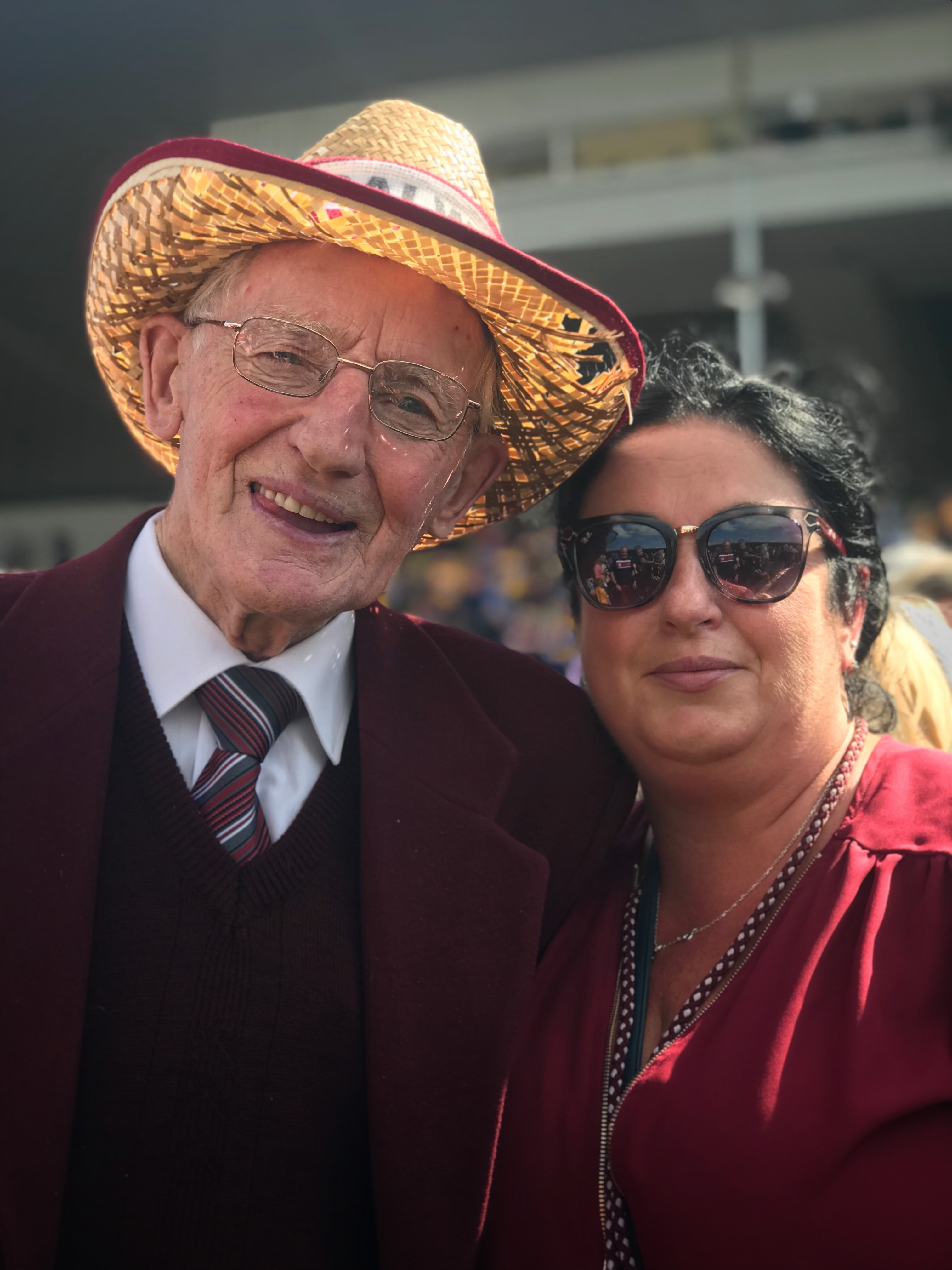 “God, that’s some commitment to the cause.” I said. What happened to you? I was going up for a ball last night. Came down without the ball and did this to my leg. Kevin McDonnell from Galway told me.  Fair play to you for coming. I wouldn’t miss it for the world. Tell me what is special about going to the games with your brother, with family.  I asked. Well, I’ll put it this way. You know those awkward moments at matches? Awkward moments? Ya, like when your team scores a goal and you grab the fella next to him and start hugging him. Well when the excitement dies down and you see it’s your brother you’ve been hugging you’re grand. No awkward moment! No random stranger you’ve been hugging. 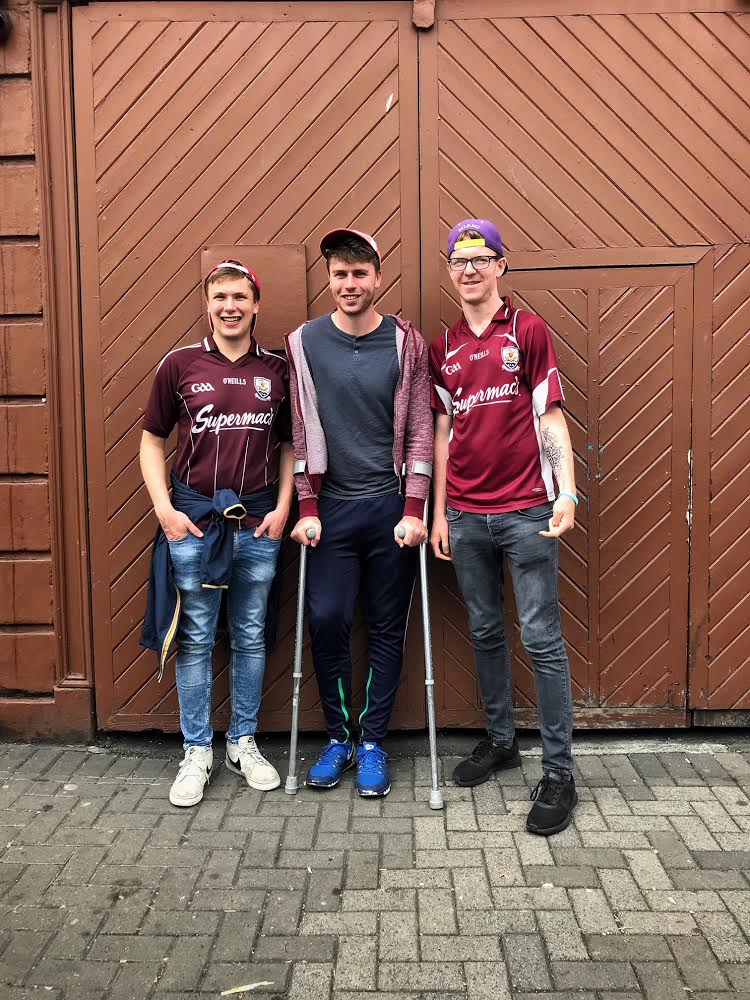 “This is our bonding time. No men. Sure both our husbands are from Offaly and what would they know? We leave them at home and enjoy the day out together. We wouldn’t have it any other way. We’ve been going to matches together since the 70s. Mary O’ Callaghan told me. Here she is with her good friend Anne McCarthy. 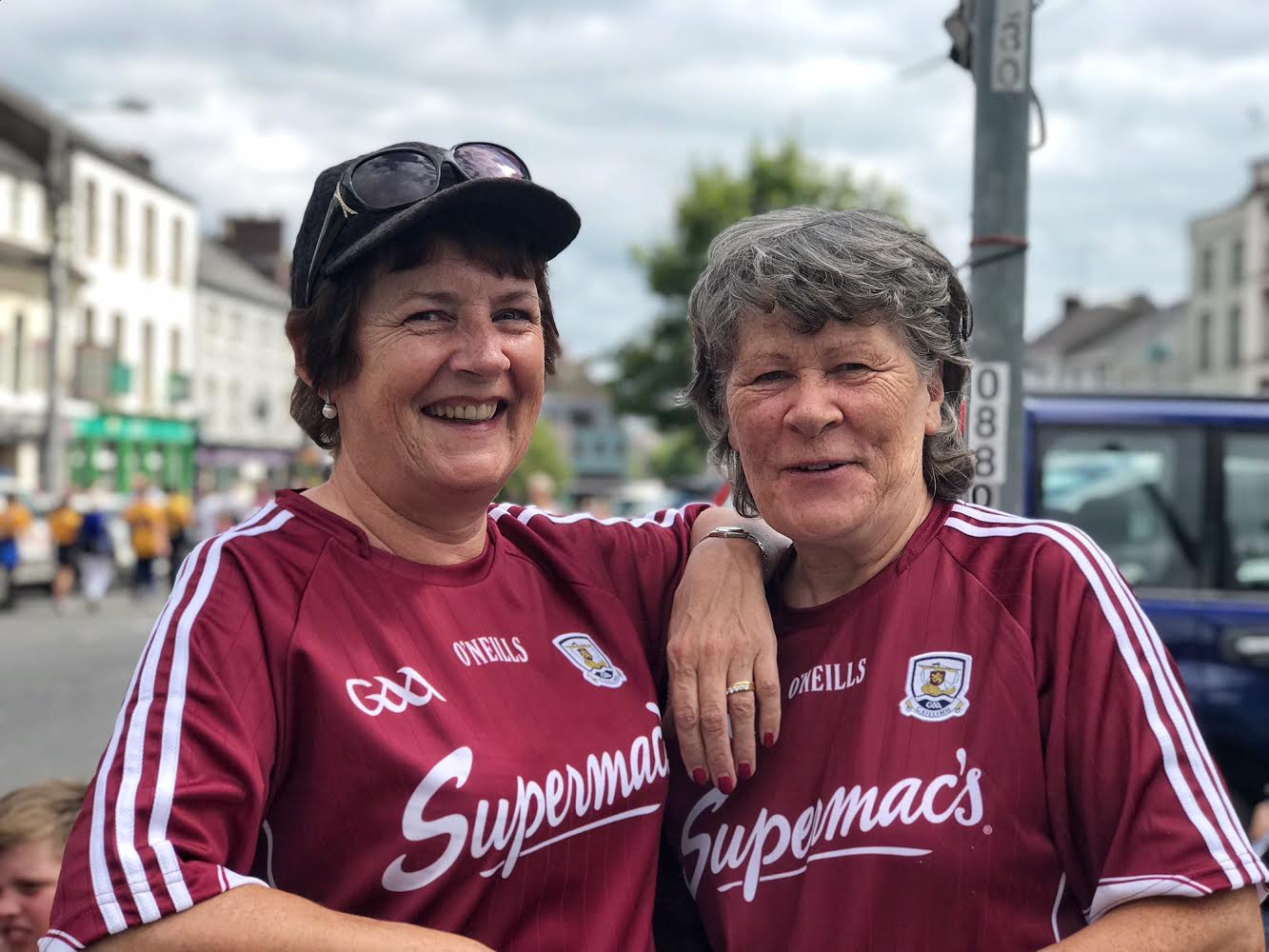 “I do, I do. The first match I brought him to was the ’98 All-Ireland Football Final against Kildare. He was 5. I told him to stay next to me. I told him. Do you think he did? Course not. I lost him. Public announcement. Got him back. Still have him!” Gerry Burke told me about his son Darren. 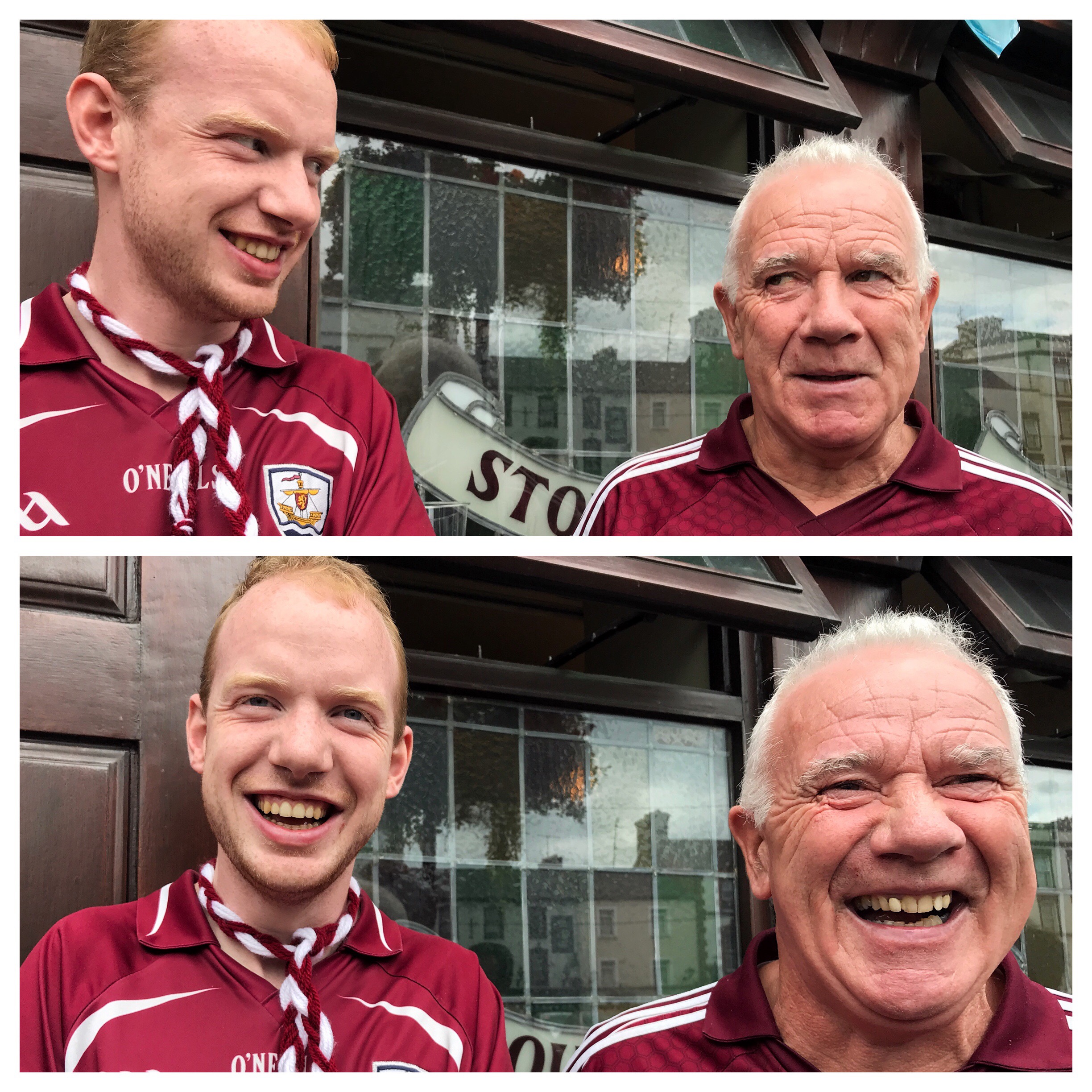 “So you’re from Ballyboffey, living in Florida but home on holidays and here in Thurles supporting Clare? I asked Marcus Griffin. “Ya, come to think of it, I really should be in Ballyboffey supporting the footballers today, but it’s great to meet up with Thomas and see some hurling. “And you’re a Tipp man, Thomas? How come you’re supporting the Banner today? “We are both married to Clare women. There’d be hell to pay if we didn’t! 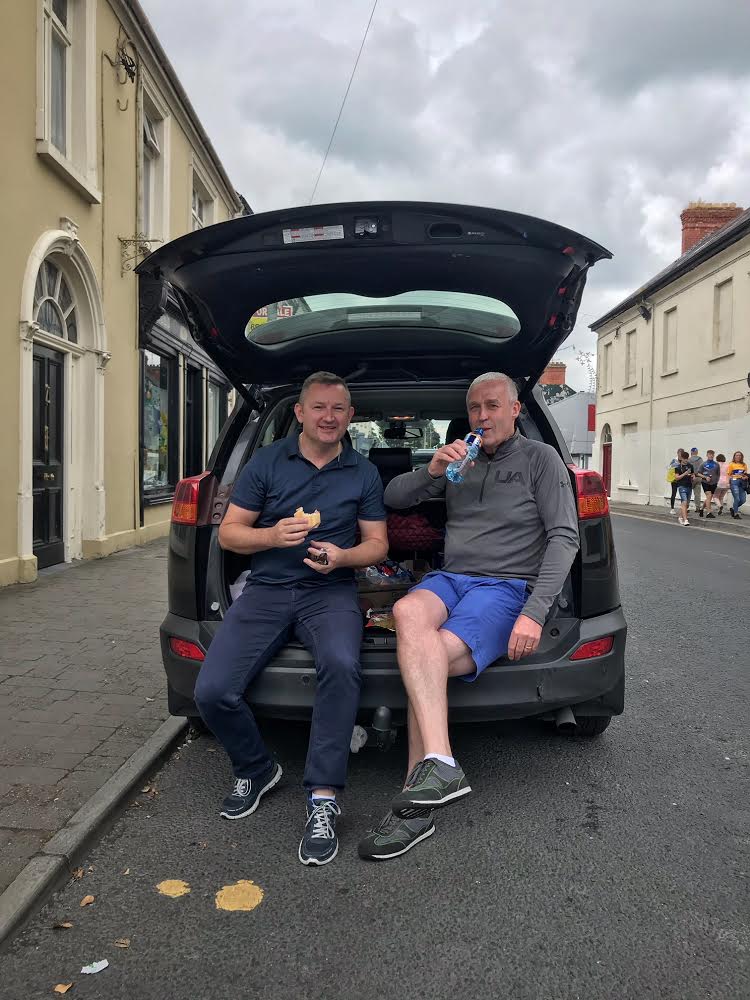 “Ah, we do enjoy it, but Mam gives out to me for getting too excited. But who wouldn’t?  Yvonne Connellan told me. “What was the best day? The best day is yet to come. Maybe today or in two weeks’ time.” Phil told me. 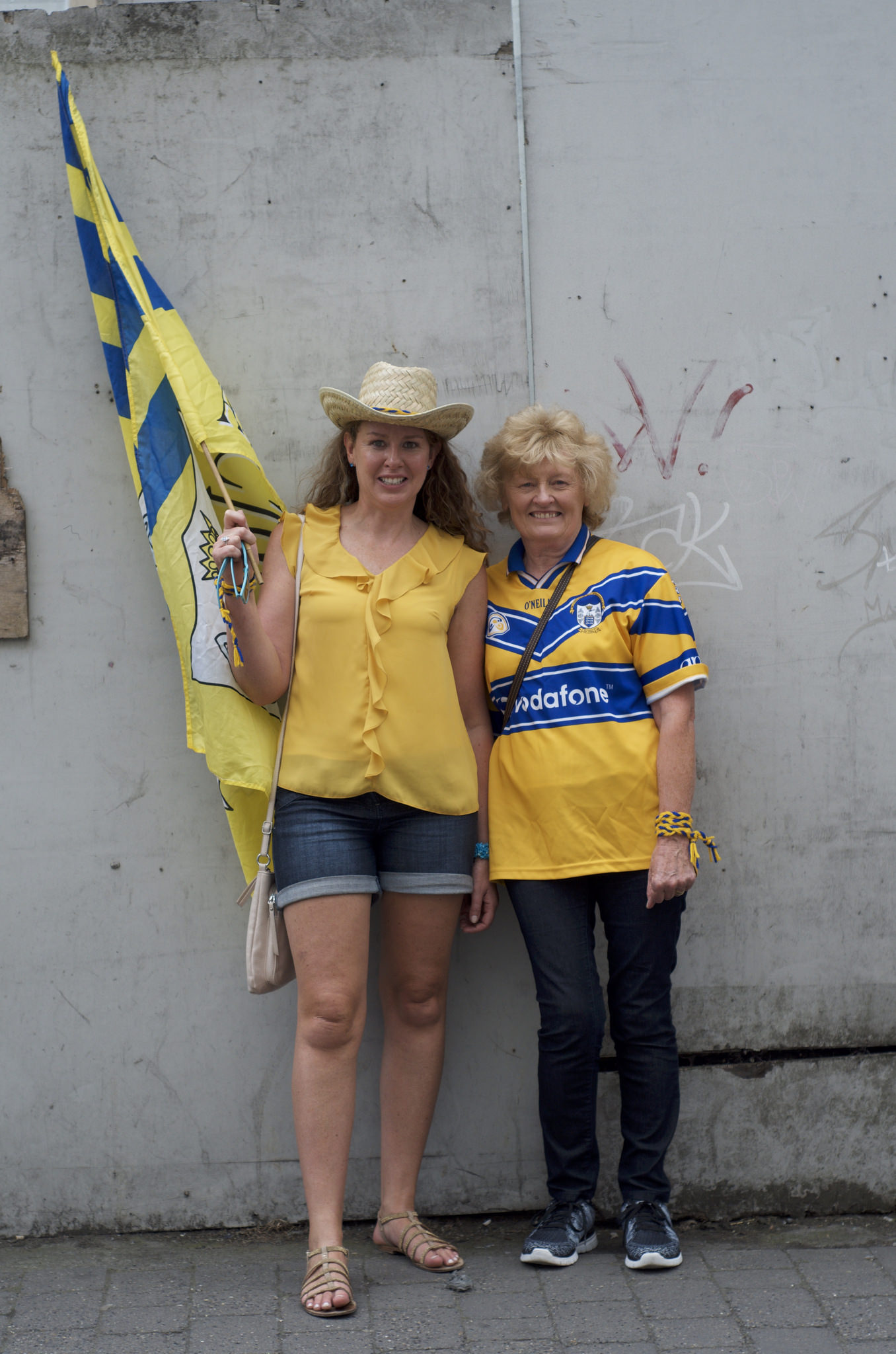 “Can I get a photo, Tommy? “Sure, he says and comes to put his arm around my shoulder. “Not a selfie! I said. A photo of you.” “Sure, grand!” he says. “What’s a Meath man doing at a hurling match? I asked. “Galway for the shmall ball.” He says. 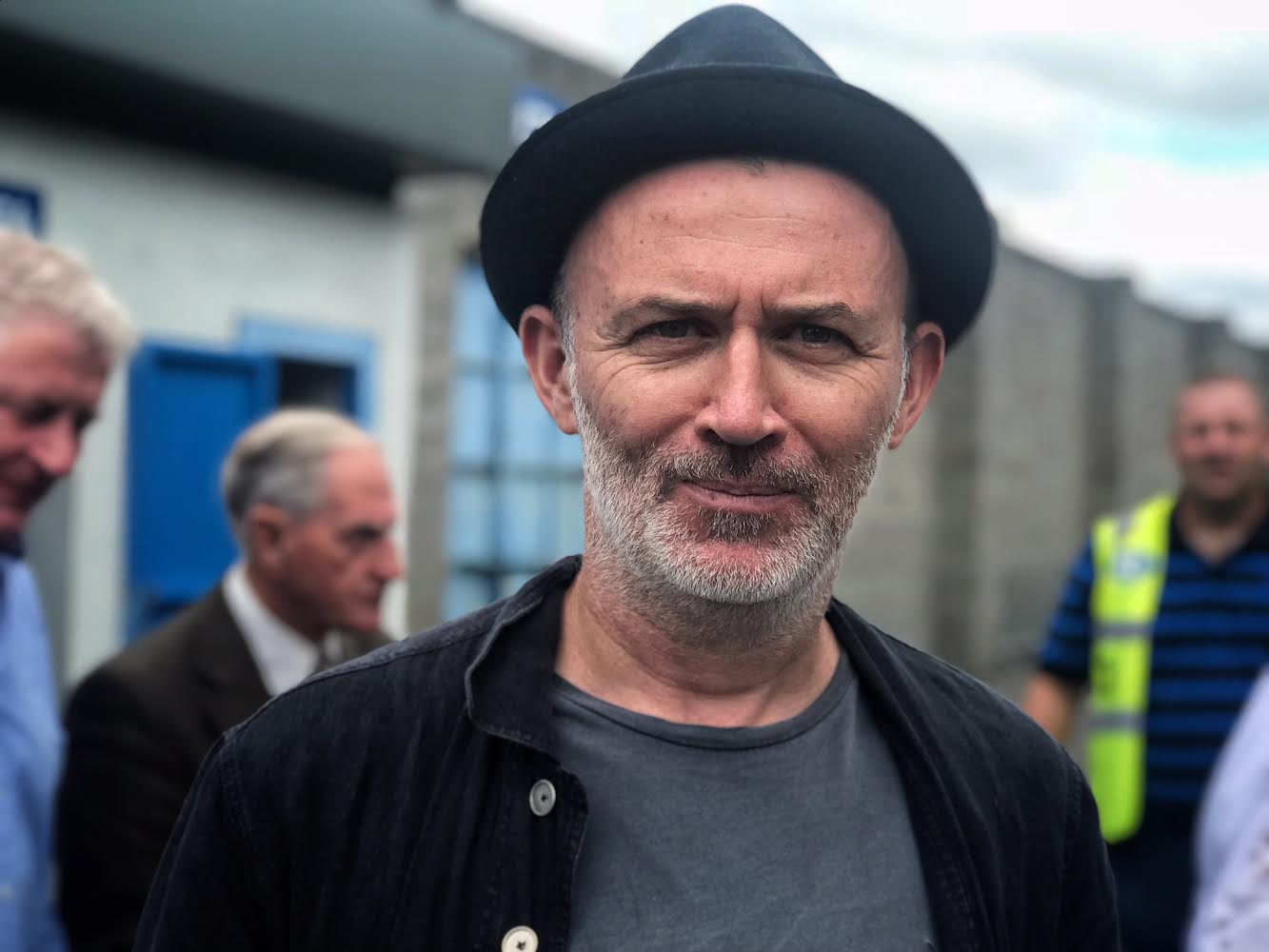 Not a selfie, Tommy!

And so we are down to two teams – Limerick and Galway. Down to one match – The All-Ireland Final of 2018. It has been an epic season and the most wonderful journey for me. I have met some wonderful people and you know I will be happy for either team to win it knowing the passion the supporters bring to the game and what it means to them all. I am really looking forward to Croke Park on Sunday, August 19th. Here’s to another classic. Here’s to hurling. The heart of hurling! 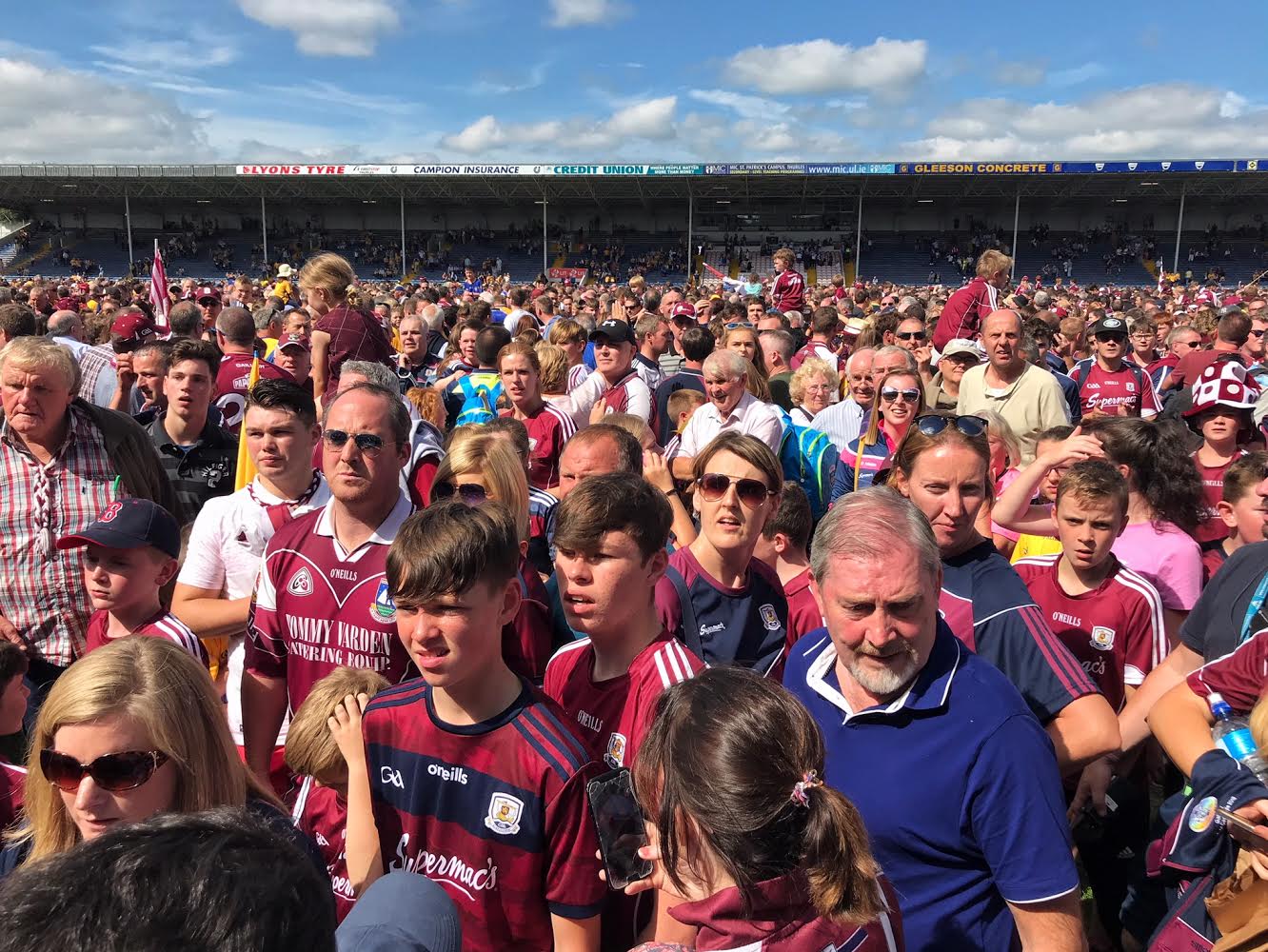 Galway crowds on the pitch after the game